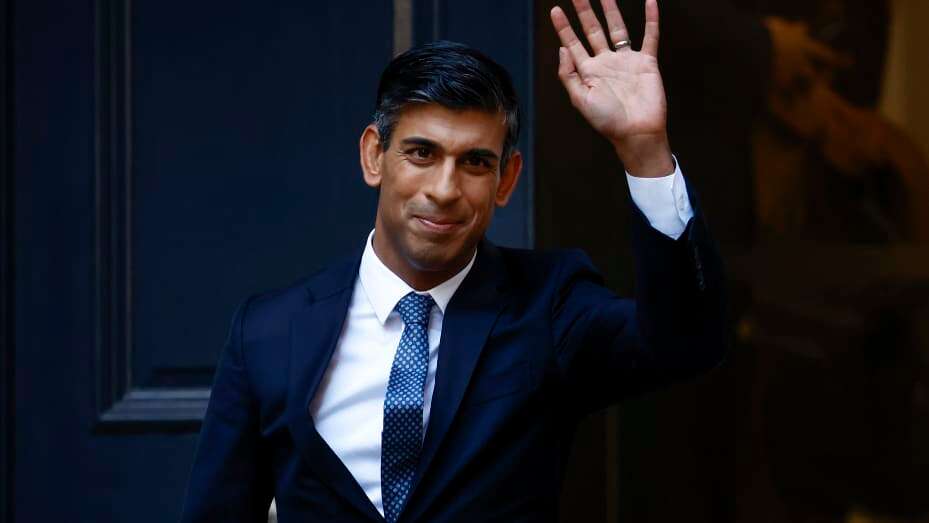 Rishi Sunak, 42, is a British politician and a leader of the Conservative Party before succeeding Liz Truss as the present prime minister of Britain.

Sunak was born in Southampton to Punjabi parents of Indian descent who migrated to Britain from East Africa, Kenya in the 1960s.

Sunak has been the Member of Parliament for Richmond Yorks (North Yorkshire) before serving as Chief Secretary to the Treasury from 2019 to 2020 and also served as a Chancellor/senior minister from 2020 to 2022.

The 222nd Richest man in Britain studied philosophy, politics, and economics at Lincoln College, with an MBA from Stanford University in California as a Fulbright Scholar (the United States cultural exchange Programs).

Sunak resigned as Chancellor and Senior Minister on July 5, 2022, and he contested with Liz Truss following Johnson Boris’s resignation as leader of the Conservative Party. However, the majority of the parliament members voted in favor of Liz.

Liz Truss, 47, was appointed on September 6, 2022 and immediately appointed Kwasi Kwarteng as her Finance Minister. Kwarteng announced a 45% tax cut without a proper means to fund the said reduction.

Lack of proper preparation amid one of the most chaotic periods in the United Kingdom forced Britons and businesses to refute the policy with global investors abandoning British Pounds and other assets for U.S Dollars.

British Pounds immediately plunged to a 37-year low against the United States Dollar. Even though Kwarteng later abandoned the policy the British were not convinced that he could lead them out of the crisis and even strike better British negotiation. A few weeks later he was sacked by Truss.

Truss tendered her resignation shortly after as the British refused to support the administration for a series of reasons bordering on poor diplomacy and insults on the part of the former Prime Minister.

During his reign as chancellor, Sunak delivered effectively as he oversaw Britain’s finances during the Covid-19 Pandemic. He chaired various public health and economic measures to control the impact of the virus, including the “Eat out to Help Out” scheme, which was introduced to support and create jobs in the hospitality sector.

After emerging victorious, Sunak pleaded for unity amid economic challenges, he said that without a doubt the United Kingdom is a great country but what the country needs now is stability and unity, including that, bringing his party and UK together was his utmost priority.

The incoming Prime Minster said, “we rise to challenges, we will meet them, we’re well prepared for them, we’ll get through them and we’ll emerge on the other side stronger”.

While at Stanford, he met his future wife Akshata Murty, the daughter of N. R. Narayana Murthy, the Indian billionaire businessman who founded Infosys.

After graduating, Sunak worked for Goldman Sachs and later as a partner at the hedge fund firms the Children’s Investment Fund Management and Theleme Partners.

Sunak was elected to the House of Commons for Richmond in North Yorkshire at the 2015 general election, succeeding William Hague. Sunak supported Brexit in the 2016 referendum on EU membership.

He was appointed to Theresa May’s second government as Parliamentary Under-Secretary of State for Local Government in the 2018 reshuffle. He voted three times in favour of May’s Brexit withdrawal agreement.

After May resigned, Sunak supported Boris Johnson’s campaign to become Conservative leader. After Johnson was elected and appointed Prime Minister, he appointed Sunak as Chief Secretary to the Treasury.

Sunak replaced Sajid Javid as Chancellor of the Exchequer after his resignation in the February 2020 cabinet reshuffle.

As Chancellor, Sunak was prominent in the government’s financial response to the COVID-19 pandemic and its economic impact, including the Coronavirus Job Retention and Eat Out to Help Out schemes.

He resigned as chancellor on 5 July 2022, followed by Johnson’s resignation amid a government crisis. Sunak stood in the Conservative party leadership election to replace Johnson, and lost the members’ vote to Liz Truss.

Following Truss’s resignation amid another government crisis, Sunak was elected unopposed as Leader of the Conservative Party.

He was appointed Prime Minister by Charles III on 25 October 2022, becoming the first British Asian and Hindu Prime Minister, as well as the first person of colour to hold the office.

Rishi Sunak to be Announced Soon as UK Prime Minister