With the Lapo USSD code, customers of Lapo Microfinance Bank can repay their loans, apply for loans and make other transactions.

All they need to do is to follow Lapo Microfinance Bank’s instructions on how to borrow a loan or perform other transactions once they dial *371#.

It is imperative to note that to use Lapo USSD Code your bank will charge you N6 as agreed by Nigerian regulators and telecommunications companies.

According to information available on the Lapo Microfinance Bank website, Lapo loans attract a nominal interest rate of 2.5% and above. However, it is imperative to double-check with the lender before taking any of the microfinance bank loans to avoid issues.

As stated above, small and medium businesses can access as much as N5 million loan or credit facility to expand their businesses. Please note that SME loans apply to all sectors.

It is important to note that this particular loan is specifically designed to support small businesses operating in Nigeria. Meaning that bigger establishments with more capital needs will need to look into other categories.

This loan product is designed to operate on a group (union) methodology. A union is a self-selected group of people who access loans individually, but have group guarantees. Regular Loan is created to help meet the working capital needs of clients that run small businesses.

The Nigerian Microfinance Bank (MFB) subsector has been assigned a financial institutions risk score of 3.0, 0.5 below the 3.5 assigned for Nigerian Deposit Money Banks (DMBs).

According to the GCR rating, the 0.5 difference was necessary to reflect the disparities in terms of weaker governance, different accounting standards/Basel adoption, lower barriers to entry, lack of access to Central Bank of Nigeria (CBN) funding and other external funding sources.

Also, asset quality tends to be weaker for the MFBs given their exposures to largely the informal sector. Total number of licensed players have been quite volatile as players are usually susceptible to license withdrawals by the CBN, with anticipation for further reduction in the players due to ongoing recapitalisation.

Positively, MFBs are not exposed to foreign exchange risk like the DMBs, and loan portfolio is usually well diversified.

Explaining the modalities for its rating, GCR stated that the Financial Institutions’ sector risk score (ranging from 0 to 15) is a key factor in the operating environment component score.

GCR combines elements of the country risk and sectoral risk analysis, blended across countries for entities operating across multiple jurisdictions, to anchor an insurer to its current operating conditions. For more details on the above, please read the related criteria and research listed below. 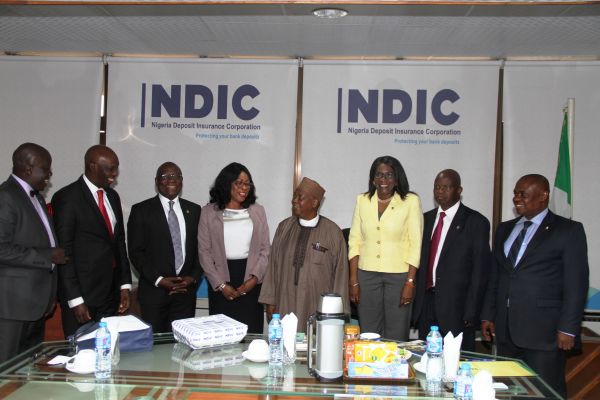 The Nigeria Deposit Insurance Corporation, NDIC has assured that depositors whose money were stuck in 23 distressed banks across the country would be refunded.

The NDIC expressed readiness to begin the reimbursement to affected account owners.

The Managing Director of NDIC, Bello Hassan gave the hint on Thursday, during the NDIC day at the ongoing 43rd Kaduna International Trade Fair, Kaduna.

Investors King learnt that the event was organised by the Kaduna Chambers of Commerce Industries, Mines & Agriculture.

Hassan, represented by the Director of Communication and Public Affairs, Bashir Nuhu, noted that the issue of failed banks will cease in the country as the corporation is carrying out its responsibility of protecting banks insured by it and ensuring financial stability.

He pointed out that each depositor was insured up to N500,000 in the event of failure while N2m insures coverage for Microfinance Banks depositors.

Hassan, however, explained that those who have funds in excess of the insured limits will be paid dividends from the proceeds of assets and debt recovery gathered from the defunct banks.

Revealing the mode of payment claims, NDIC stated that verification will be done physically and on their online platforms.

“It is on this note that I like to call on depositors of banks in liquidation to avail themselves of the Corporation’s physical and online platforms for claiming their trapped deposits.

“The online claim verification platform has been incorporated into the Claim Page on our website (www.ndic.gov.ng) to facilitate processing of claims from the comfort of depositors’ houses and offices.”

Hassan further listed the insured banks of which its depositors would be refunded as;

The NDIC Boss further stated that the corporation had declared 100 percent liquidation dividends to depositors of 22 DMBs in liquidation.

This, according to him will afford the agency enough to funds to pay all affected depositors of the 23 DMBs 100 percent of their money.

“The Corporation has since moved on to commence payment of liquidation dividends to creditors and shareholders of some of the banks, indicating that their depositors can access their full payment whenever they file their claims.

“NDIC has been living up to its mandate and public policy objectives of contributing to financial system stability,” he said.

The Nigeria Incentive-Based Risk Sharing System for Agricultural Lending says it has about three million farmers on its database and has facilitated over N128 billion for agriculture and agribusiness across the country since its inception.

The Managing Director/CEO of the agency, Aliyu Abdulhameed, made this known in Akpabuyo during the agency’s Credit Risk Guarantee-backed project launch with Gbagolo Farm Ltd and TOAJ Nigeria Ltd.

While Gbagolo Integrated Farms Limited will use its N81.8 million Term Loan to finance the purchase of 25,000 points of lay birds, 25,000 capacity battery cages and feeding complements, TOAJ Nigeria Limited will channel its N150m Export/Trade Finance facility towards the sourcing and purchase of cocoa for export, Abdulhameed said.

He added that both projects were testaments to the fact that NIRSAL Plc in its bid to realize its vision of transforming the economy supported all sizes of businesses, whether small, medium, or large across the length and breadth of the country.

He added that, as a guarantor, NIRSAL Plc’s intervention positively impacted both the lender and the borrower, as well as the overall economy.