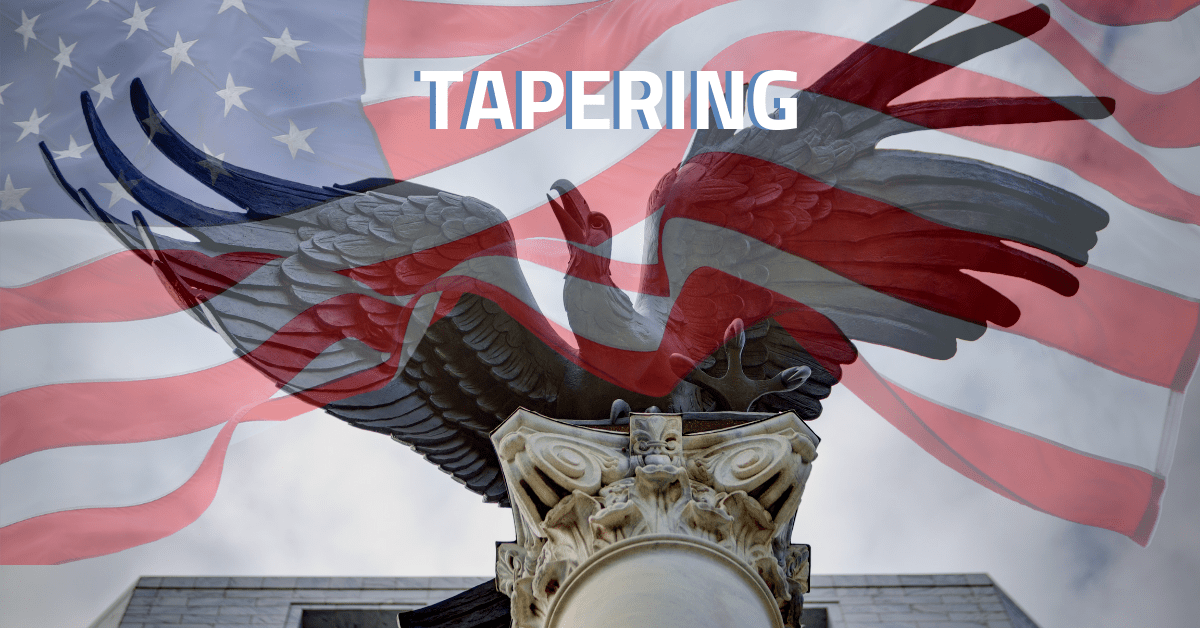 The United States Federal Reserve on Wednesday announced it will start cutting down (tapering) on some of the support (quantitative easing) it has given to the economy since the COVID-19 pandemic struck in 2020. What this means is that the central bank will start reducing the size of the bonds it purchases monthly to improve access to funds and support new job creation in order to gradually allow the economy to partially self-function.

According to available data, the FED was spending $120 billion on asset purchasing program (the means by which funds are injected into the economy) per month and slashed interest rates to near-zero to ensure businesses could access loans at an affordable rate to encourage job creation.

But following a V-Shape recovery that suggested that the American economy is on its way to full recovery, the FED officials at the Federal Open Market Committee on Wednesday unanimously voted to start tapering, especially after the size of the asset-buying program rose to over $8 trillion in 2021.

To begin, the committee will start cutting net asset purchases by $10 billion for Treasury securities and $5 billion for agency mortgage-backed securities in November 2021.

While another $15 billion would be reduced in December and “that similar reductions in the pace of net asset purchases will likely be appropriate each month”. The committee announced it is “prepared to adjust the pace of purchases if warranted by changes in the economic outlook.”

Without devaluation, a strong American dollar has no effect on a pegged currency like Naira as an increase in Dollar value without a simultaneous decline in counterpart value leaves zero room for arbitrage.

What Does These Means

It means the money in circulation will decline in relation to the adjustments made to the asset-purchase program. However, this is where it gets tricky, why several market experts and individuals expect the FED to raise interest rates in justification of a better economy and to control inflation, the FED is likely not to toll that line given the factors responsible for the high inflation rate. Supply constraints being experienced as a result of rising demand in the US and the world at large, rising oil prices, among others, are the underlying factors bolstering consumer prices.

Consumer Price Index, which measures inflation rate, rose to 5.4 percent year on year in September on the back of rising oil prices, supply constraints, limited labour force to match demand and other increases recorded on input materials due to COVID-19 damages. To better sustain support for the economy while simultaneously managing inflation, the FED is unlikely to raise borrowing costs in the near term as that will simply escalate inflation further, drag on job creation, hurt consumer spending, etc.

Again, it would be in line with some of the FED’s suggestions in recent times that tapering does not mean interest rates increase.

“We noticed from the Fed communication that they would like to de-link the taper from the rate hike,” said Erik Nelson, macro strategist at Wells Fargo Securities in New York. “But it will take a lot of convincing and frankly a lot of time for the market to change its reaction function. For now, a taper timeline is closely linked to a rate hike timeline in the market.”

How Do These Affect Naira and the Nigerian Economy

Until the FED raises interest rates, all these will have no effect on the Naira or the Nigerian economy at large. For one single reason, the Naira is not free floated. In other economies, where the value of their local currencies are determined by market forces, this news will have a significant effect – either trigger demand for US Dollars, especially with the global market projecting dollar scarcity and subsequent strong greenback.

Nigerian Naira only responds to the Central Bank of Nigeria’s actions. For instance, if the central bank devalued the Naira against the United States Dollar, the foreign exchange differential automatically widened and increase arbitrage opportunities for hoarders and speculators.

Without devaluation, a strong American dollar has no effect on a pegged currency like Naira as an increase in Dollar value without a simultaneous decline in counterpart value leaves zero room for arbitrage. It is the same reason an increase in American Dollar value does not affect the price of US import items in Nigeria but Nigerian factors.

Power, Still in Need of a Leg-up – Coronation Merchant Bank