The index rose by 275.34 index points or 0.66 percent from 41,763.26 index points recorded in the previous week to 42,038.60 index points last week. In the month of October, the bourse gained 4.52 percent to bolster the year-to-date return to 4.39 percent after months of posting negative returns.

Market capitalisation of all listed equities appreciated by N144 billion from N21.794 trillion in the previous week to N21.938 trillion last week.

Eterna Plc, FBN Holdings Plc, and Transnational Corporation of Nigeria Plc were the three most traded stocks in the week. The three accounted for a combined 1.731 billion shares worth N19.681 billion in 4,207 deals, translating to 57.66 percent and 56.97 percent of the total equity turnover volume and value, respectively.

All other indices finished higher with the exception of NGX CG and NGX Meri Value indices which depreciated by 0.04% and 2.20% respectively, while the NGX ASeM and NGX Growth Indices closed flat. 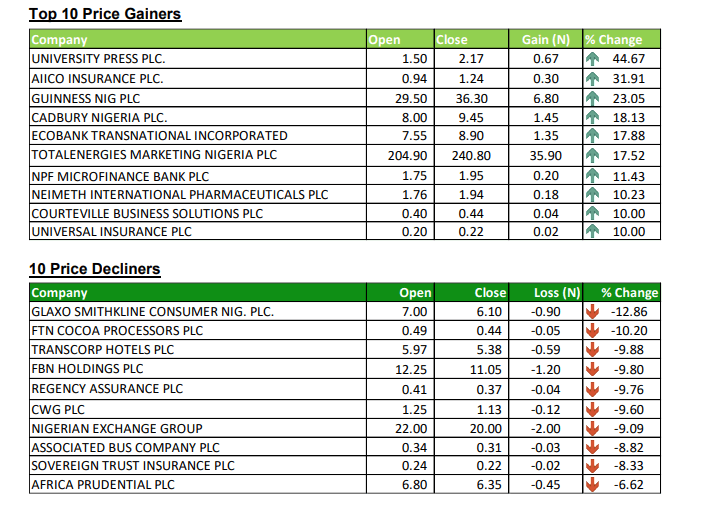 Stocks of Dangote Sugar, Stanbic Bank, Ardova, FCMB and others led the Nigerian Exchange Limited (NGX) decline on Thursday despite the bourse extending its this year gains to 7.45 percent.

The market value of all listed stocks gained N248 billion from N24.477 trillion it closed on Wednesday to N24.725 trillion on Thursday. The NGX All-Share Index appreciated by 1.01 percent on Wednesday after posting a 1.73 percent gain on Tuesday to close at 45,890.52 index points.

The increase was a result of jumped in Dangote Cement activity level. Investor or group of investors, likely in insider dealings – expected to be announced soon, transacted  102,917,075 shares of Dangote Cement valued at N28.779 billion. The transaction accounted for 91.24 percent of the total N31.542 billion traded on Thursday.

Despite the jump in the value of global oil prices to over $90 a barrel this week, the Nigerian oil sector shed 9 bps on a 2.60 percent decline recorded by Ardova. See the details of top gainers and losers below.

Investors in the Nigerian Exchange Limited (NGX) have realised a combined N526 billion gain in the last three trading sessions to offset Monday’s decline. The Exchanged, which closed at N23.951 trillion market value on Friday, increased to N24.477 trillion on Wednesday.

On Monday, NGX dipped by N29 billion to N23.922 trillion but quickly rebounded on Tuesday and sustain its expansion on Wednesday on the back of renewed interest in the bourse.

A total of 16 large stocks posted gains, against 17 stocks that closed in the red. The year-to-date return rose to 6.35 percent. See the details of top gainers and losers below.

Nigeria’s equities market rebounded from Monday’s decline to extend its bullish run for the year by N137 billion on Tuesday.

The NGX Consumer Goods Index rose by 69bps on 7.35 percent and 0.18 percent gain in Dangote Sugar and Flour Mill, respectively. While the Oil and Gas Index also inched higher by 25 basis points on Eterna and Conoil’s 5.83 percent and 3.05 percent gains.

The Exchange year-to-date return rose to 4.54 percent. See top gainers and losers below.