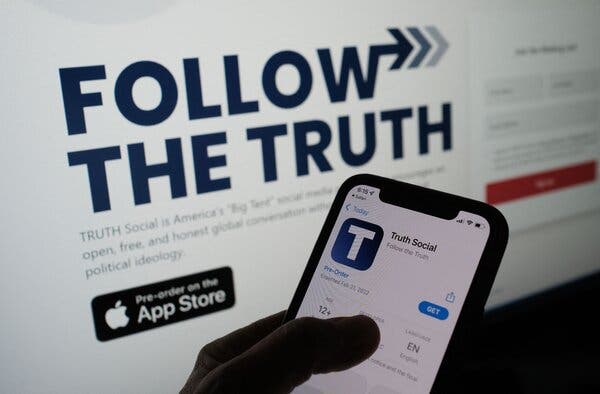 Former U.S. President Donald Trump on Wednesday announced his plans to launch his own social media platform, TRUTH Social. According to a press release he said Truth was created to “stand up to the tyranny of Big Tech” companies such as Twitter and Facebook that have barred him from their platforms.

“I created TRUTH Social and TMTG to stand up to the tyranny of Big Tech,” Trump said in the statement.

The app, which is available for pre-order in Apple’s App Store, will open to invitees in November and to the public in the first quarter of 2022, the release said.

Trump’s announcement comes after months of speculation about his plans to create his own media operation after nearly every major social media platform – including Facebook, Twitter, and YouTube – banned or suspended him for violating their policies.

“We live in a world where the Taliban has a huge presence on Twitter, yet your favorite American President has been silenced. This is unacceptable.

“I am excited to send out my first TRUTH on TRUTH Social very soon. TMTG was founded with a mission to give a voice to all. I’m excited to soon begin sharing my thoughts on TRUTH Social and to fight back against Big Tech,” Trump said in a written statement included in the release.

The social network, set for a beta launch next month and full rollout in the first quarter of 2022, is the first of three stages in the company’s plans, followed by a subscription video-on-demand service called TMTG+ that will feature entertainment, news and podcasts, according to the news release.

In a slide deck on its website, the company envisions eventually competing against Amazon.com’s AWS cloud service and Google Cloud.

The former president’s son, Donald Trump Jr., told Fox News in an interview, “for so long, Big Tech has suppressed conservative voices, tonight my father signed a definitive merger agreement to form what will ultimately be the Trump Media and Technology Group and TRUTH Social – a platform for everyone to express their feelings.”

Twitter, Facebook and other social media platforms banned Trump from their services after hundreds of his supporters rioted at the U.S. Capitol on Jan. 6.

That protest came after a speech by Trump in which he falsely claimed that his November election loss was due to widespread fraud, an assertion rejected by multiple courts and state election officials.

Trump Media & Technology Group will receive $293 million in cash that Digital World Acquisition Corp had in trust, assuming no shareholder of the acquisition firm chooses to redeem their shares, according to the statement.

Meta-owned messaging app, Whatsapp has ventured into the world of entertainment as it is set to premiere an original short film ‘Naija Odyssey’ on YouTube and Amazon Prime Video on the 21st of September.

The film also features his mother Veronica who narrates the different moments in her son’s life as a journey loosely based on the Greek epic poem ‘The Odyssey.’

“In Greece, my teachers told stories of travelers battling the sea, fighting to find their way home to find themselves. “I was on that same journey”,  Antetokounmpo narrates in the trailer.

Speaking on the role WhatsApp plays in the short film, WhatsApp’s global head of marketing on the inspiration for the short film, Vivian Odior said ‘Naija Odyssey’ is a story that reinforces how WhatsApp helps us embrace our multifaceted lives.

“In navigating relationships, identity, and even adversity, WhatsApp is there, enabling you to embrace all sides of you by connecting you to those who matter most.”

Giannis Antetokounmpo signed an endorsement contract with the social messaging platform, he is the first brand ambassador of WhatsApp.

The short film ‘Naija Odyssey’ seems to be a strategic way Whatsapp seeks to not only promote its brand but also show the brand’s ethos of connecting people around the world.

Giannis has already taken to his social media accounts to post the trailer of the short film, as he is seen in places like Milwaukee, Wisconsin, and several other places.

The tagline, “Across worlds, across cultures, across identities”, like the film tries to capture the duality of belonging to two different places, which tells the story of the basketball player.

Microblogging and social networking platform Twitter, has officially launched the alt text feature that enables users to add descriptions to their photos.

The social networking site began the testing of this feature on limited accounts in July this year. After the successful testing phase, it then decided to roll out the feature for all users on the platform.

In an effort to ensure that thousands of images that get posted and retweeted daily on the platform are accessible to visually impaired people, Twitter had to introduce the alt text feature, which is a written description of what’s in an image that can be picked up by a screen reader software used by internet users who are blind or visually impaired.

After a few disability activists urged Twitter to introduce the alt text feature, they have described the introduction of the feature as a long time coming, adding that Twitter should urge users who are not visually impaired to be more consistent with adding alt text to images.

With this newly launched feature, when a user is about to post a picture of the platform, he or she will be given the option to add the alt text which they will need to click on the edit button on the image and then go to the tab named ALT.  When they tap on that, they will be presented with up to 1,000 characters to describe the picture.

Twitter is aware an alt text reminder feature is something users have wanted for a while, says Gerard Cohen, software engineering manager on Twitter’s accessibility experience team.

In his words, “If it was up to us, we would snap our fingers and the world would be accessible. We understand that it’s been a long time coming.

“We’re very grateful for those bot makers, those people that have gone ahead and done it.”

The alt text reminders will be opt-in, meaning that users will need to go into their account settings to turn on the prompts, which will sync across the device.

Once reminders are on, users will get notified each time they add an image without alt text, prompting them to go back and add descriptions before posting.