Nigerian Exchange (NGX) Limited is set to host the inaugural edition of its TechNovation Conference on Thursday, 30 September 2021.

NGX TechNovation Conference is a flagship event that provides a platform for local and global technology leaders to syndicate conversations around technology, partnerships and innovation that can advance technology adoption in the Nigerian capital market.

Key topics to be addressed during the conference are: The Future is Digital – Digital Transformation, New Tech and Emerging Markets; The Path to Exponential Growth – New Technology, Platforms, Emerging Markets, Data & Regulation; and Beyond Tech – Partnerships, Business Models and Innovation. Interested participants can register online.

The advancement and exponential growth of technology around the world have signaled a new wave of opportunities for forward-thinking organizations. NGX remains committed to leveraging technology to provide a broad range of services including but not limited to smart capital formation. TechNovation will, therefore, serve as a platform that can create opportunities for smart business leaders looking to tap into the next level of growth and competitive advantage.

Naira Dips to N413.62 Against U.S Dollar on Monday

Universal Insurance led gainers with N0.02 or 10 percent gain to close at N0.22 a share. University Plc emerged second with N0.15 or 10 percent increase to settle at N1.65 a unit. See other details below.

The Nigerian Exchange Limited (NGX) opened the week in green as more stocks extended their gains on Monday.

The stock price of the Nigerian Exchange Group extended its bullish run to N22 per share last week, representing an increase of 23.95 percent when compared to its N17.75 per share opening price.

In terms of the volume traded, the financial service industry led the activity chart with 1.179 billion shares valued at N12.746 billion traded in 13,272 transactions. Therefore, contributing 75.38 percent and 69.33 percent to the total equity turnover volume and value, respectively.

FBN Holdings Plc, E-Tranzact International Plc and Access Bank Plc were the most traded equities, accounting for 626.888 million shares worth N6.303 billion in 3,677 deals. The three contributed 40.07 percent and 34.29 percent to the total equity turnover volume and value, respectively. 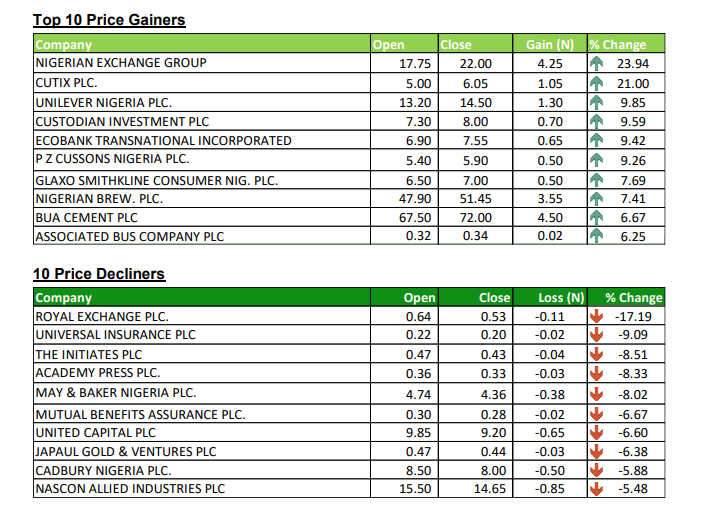