The Independent National Electoral Commission (INEC) on Friday said it would begin the online voter registration, via its registration portal, on June 28.

The INEC National Commissioner, Mr. Festus Okoye, announced this at a news briefing on the preparations for the Gwaram bye-election in Dutse.

“The INEC Voter Registration Portal will be deployed to enable people to register online and thereafter go to their respective state or local government office of the commission to capture their biometrics and facials.

“Those that want to transfer their registration from one place to another can also make use of the online portal.

“Those that have prior issues of accreditation and with damaged or defaced PVCs can also use the online portal to rectify the challenge,’’ the commissioner explained.

Okoye also said that the INEC Chairman, Prof. Mahmood Yakubu, would announce the time for the commencement of the physical registration at the end of the consultation with critical stakeholders.

He, therefore, appealed to all critical stakeholders to rave-up their voter education initiatives.

He also called on civil society groups and the media to assist in educating Nigerians on the import of online voter registration.

The Federal Government plans to release N30 billion as revitalisation fund to universities next week, according to the Minister of Labour and Employment Chris Ngige.

The minister said that the money was paid in January and remain in the custody of the Central Bank of Nigeria (CBN) pending the conclusion of the audit report of the Implementation Committee on the use of previous funds disbursement to universities by the Ministry of Education and the National Universities Commission (NUC).

Ngige said that the monies will be paid to successful universities based on the evaluation report of the committee while those with shortcomings will be made to make up before accessing the fund.

The revitalisation fund is among seven key issues evaluated at a meeting with the leadership of the Academic Staff Union of Universities (ASUU) on Monday.

A statement by the Deputy Director of Press and Public Relations, Federal Ministry of Labour and Employment, Charles Akpan, said both parties at the meeting expressed satisfaction with the implementation stages of what Ngige termed “work in progress.”

The Minister said some of the items in the Memorandum of Action (MOA) were nearly done hundred percent within the timeline.

He explained the National Information Technology Development Agency (NITDA) was directed to expedite action on the integrity test on the University Transparency Accountability Solution (UTAS) which if successful, will eliminate the challenges posed by the peculiarities of the university system to the current payment platform.

“The report has been turned in, deliberated upon and both the Education Ministry and the NUC have promised to write to the Accountant General of the Federation next week for the release of the money to the NEEDS Special Account for onward disbursement to universities shortly,” Ngige said.

“On the proliferation of State universities, a bill has been sent to the National Assembly by the NUC to strengthen its arms in terms of delisting universities where funding and other parameters are inadequate.

“This effort was commended as all the parties agreed that mushrooming and proliferation of state universities, some of which mock the ideals of an ivory tower, should stop.

“We expressed our displeasure that these things are happening – amputation of salaries, not-too-clear, foggy things happening over peoples monthly emoluments. So we have asked IPPIS and ASUU to work together over this,” the Minister said.

He also said that evidence was presented to show that promotion arrears have been paid to some universities while the Budget Office of the Federation and the Office of the Accountant General of the Federation was asked to liaise with ASUU to sort out the rest, noting that the standing committee on the matter has been expended to include National Income Salaries and Wages Commission.

“A situation where a university professor is paid N107, 000 out of mistake or over deduction is unacceptable,” Ngige declared.

The Nigerian Institution of Estate Surveyors and Valuers have rejected the monthly house rent proposal of the Minister of Works and Housing, Babatunde Fashola.

NIESV President, Emmanuel Wike, told journalists at a press briefing in Abuja on Sunday that although the institution would meet the minister on the matter, surveyors viewed Fashola’s position on monthly rent differently.

About two weeks ago, Fashola identified exorbitant amounts of rent, ranging from one to three years demanded by landlords and property owners before they let out their properties as the major cause of housing challenges in Nigeria.

The minister also dismissed the 17 million housing deficit figure being brandished in Nigeria, stressing that the claim had no scientific proof.

Fashola then proposed monthly rent by property owners in order to make houses affordable homes for Nigerians in urban centres.

Reacting to this, Wike said, “As a major stakeholder in the housing sector, the Nigerian Institution of Estate Surveyors and Valuers view the suggestion of the minister from a different perspective.

“The institution intends to visit him as soon as possible to deliberate and harmonise positions on the matter.”

On the claim that Nigeria had a 17 million housing deficit, the NIESV president stated that the institution was working on getting the right figure.

He said findings by the institution would be genuine, stressing that NIESV had also figured out that many abandoned properties were owned by the federal and state governments.

Wike said, “We wish to reaffirm the importance of data in addressing the housing provision. Data is a priority of the institution.

“We are at the moment updating the data we earlier produced on the Nigerian housing sector of which a copy was given to the minister at our 49th annual conference of 2019 in Lagos.

“No doubt, data produced by the institution would be reliable and acceptable to players in the real estate sector.”

He added that the institution would also endeavour to undertake the enumeration of wasting and abandoned properties, some of which belong to government at various levels, with recommendations on what could be done with them. 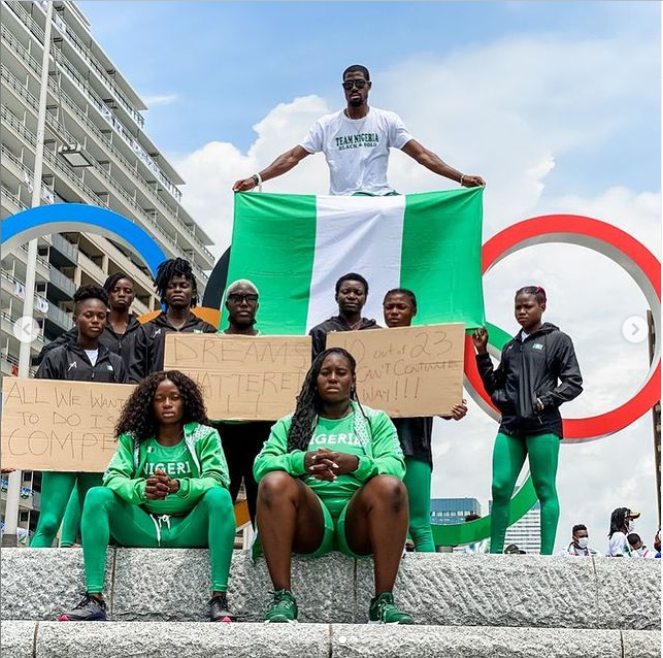 While other countries are celebrating heroic feats and medals in Tokyo, Team Nigeria‘s situation is different as the athletes are protesting the ‘shame’ brought upon the country by negligent sports administrators.

It was reported on Wednesday how 10 of the country’s athletes were disqualified from taking part in the Olympic Games due to their failure to undertake the mandatory three out-of-competition tests expected of athletes taking part in a competition of this magnitude.

Rather than take full responsibility for their failings, the Sports Ministry labeled those affected as ‘alternate and foreign students athletes, whose tests did not meet with sample collection and analysis standards’.

This has not gone down well with the affected athletes who then staged a protest to register their displeasure.

The Athletic Federation of Nigeria, (AFN); the ministry of youth and sports development and the Nigeria Olympic Committee, NOC are all complicit in this national embarrassment brought on Nigeria.

These bodies were saddled with ensuring that the athletes affected undergo the tests in the build-up to the Olympics as prescribed by the World Athletics rules.

During Friday’s protest, the athletes carried various placards with inscriptions such as “We are not just alternate but are potential medalists”, “All we wanted to do is to compete,” “Why should we suffer for someone else’s negligence?” 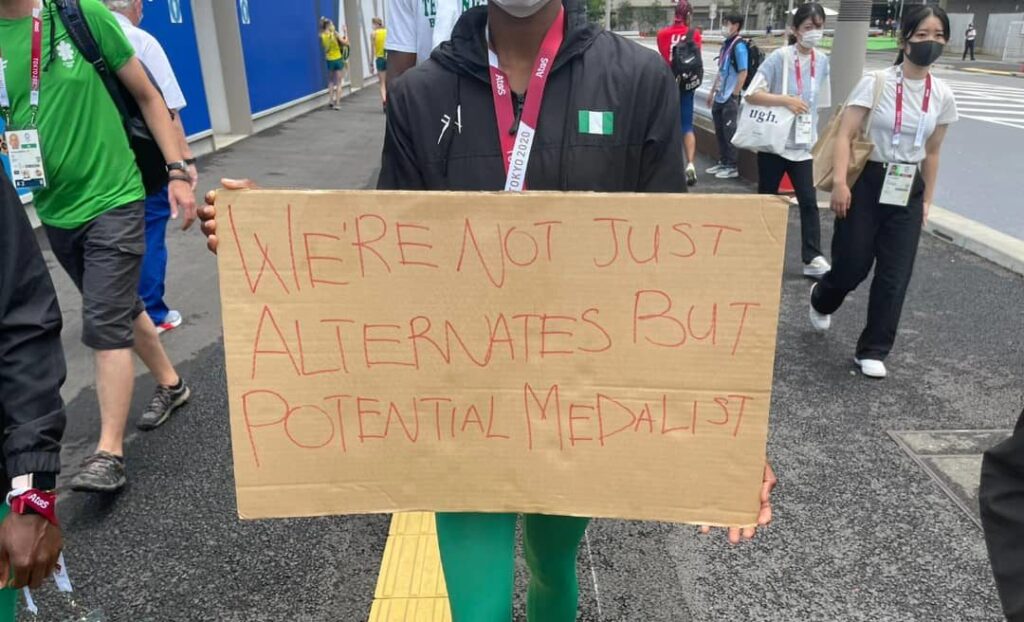 Meanwhile, President of the Athletics Federation of Nigeria (AFN) Tonobok Okowa, has appointed Ken Anugweje as the Head of the Medical and Anti Doping Commission of the Federation.

This step is coming on the heels of the Athletics Integrity Unit’s decision to disqualify the 10 Nigerian athletes from competing at the ongoing Tokyo Olympics due to uncompleted Out of Competition Tests (OCTs).