FTN Cocoa Processors led gainers last week with 27 Kobo or 43.55 percent gain to close at 89 kobo per share ahead of the Christmas holiday.

In the second place was the consumer goods industry, the industry followed with 182.099 million shares worth N4.392 billion in 2,485 deals.

The industrial goods industry came third with a turnover of 145.808 million shares estimated at N10.632 billion but exchanged in 2,587 deals.

The top three most traded equities in terms of volume were Access Bank Plc, Zenith Bank Plc and AXA Mansard Insurance Plc. The three accounted for 1.439 billion shares worth N13.881 billion that were traded in 2,972 transactions. They contributed a combined 52.23 percent and 34.44 percent to the total equity turnover volume and value traded during the week, respectively.

Market value of the Nigerian Stock Exchange blasted through N20 trillion to N20.279 trillion, representing an increase of 5.42 percent from the previous week.

The Exchange year to date gain rose to 44.55 percent while it has gained 27.09 percent in this final quarter of the year with 10.72 percent of that gain coming from December alone.

As the year comes to an end, the NSE Industrial Goods Index leads other indexes with a 72.88 percent gain this year. While the NSE Premium Index came second with a 60 percent gain. See the list of top gainers and losers for the week below. 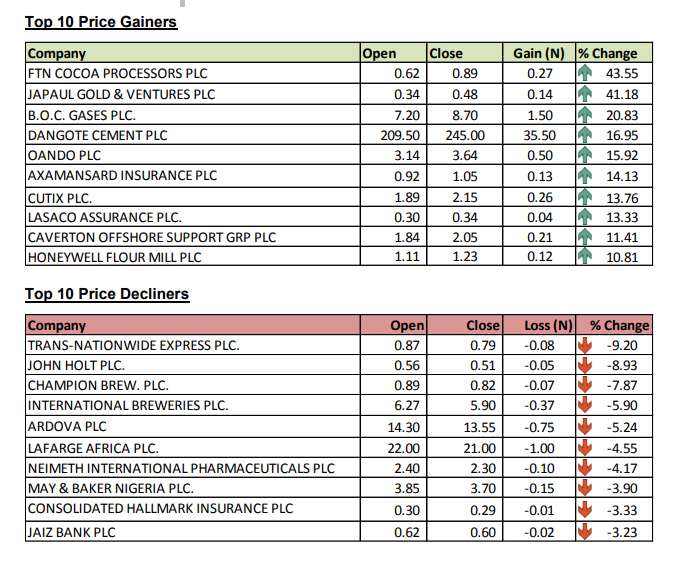