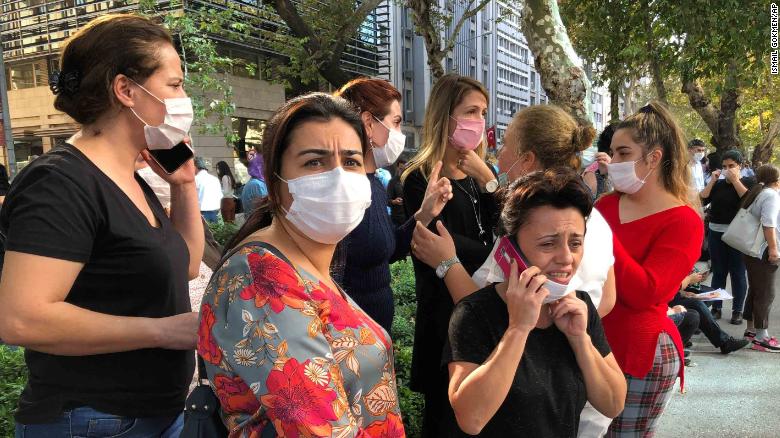 At least 14 people have been killed in Turkey and Greece after a powerful earthquake hit the Aegean Sea on Friday afternoon, sending buildings crashing down and triggering what authorities have called a “mini tsunami.”

Officials said 12 people were killed in coastal areas in Turkey’s west, while two teenagers died on the Greek island of Samos after a wall collapsed on them.

In Turkey, at least 20 buildings in the city of Izmir alone were destroyed, Mayor Tunc Soyer told CNN Turk. Images showed vehicles crushed under the buildings and people digging through the rubble in search of survivors.

At least 522 people have been injured in Turkey, said Murat Kurum, Turkey’s Environment and Urbanization Minister. Dozens were saved by rescue teams using diggers and helicopters to search for survivors, according to the country’s disaster agency.

Kurum said 114 aftershocks have been recorded, and search and rescue operations continue in 17 buildings, four of which have collapsed.

People standing outside their homes in Izmir, Turkey, on Friday.

Turkish President Recep Tayyip Erdogan said that among Turkey’s injured, five people are being operated on and eight are in intensive care.

TV footage showed water flooding through the streets of Cesme and Seferihisar in parts of Turkey’s wider Izmir province, as well as on the Greek island of Samos, in what officials described as a “mini tsunami.” No tsunami warnings were issued.

Idil Gungor, who works as a journalist and runs a guesthouse in the Turkish town of Siğacik in Izmir province, said that the area was damaged more by the force of the water than the quake itself.

Her guesthouse, in a 100-year-old building, had been inundated and fish were swimming inside it, she said. Shops in town have also been flooded and their goods damaged.

“Everybody is calm but shocked and we’re wondering what will happen, if there’s a second tsunami coming or not,” Gungor said.