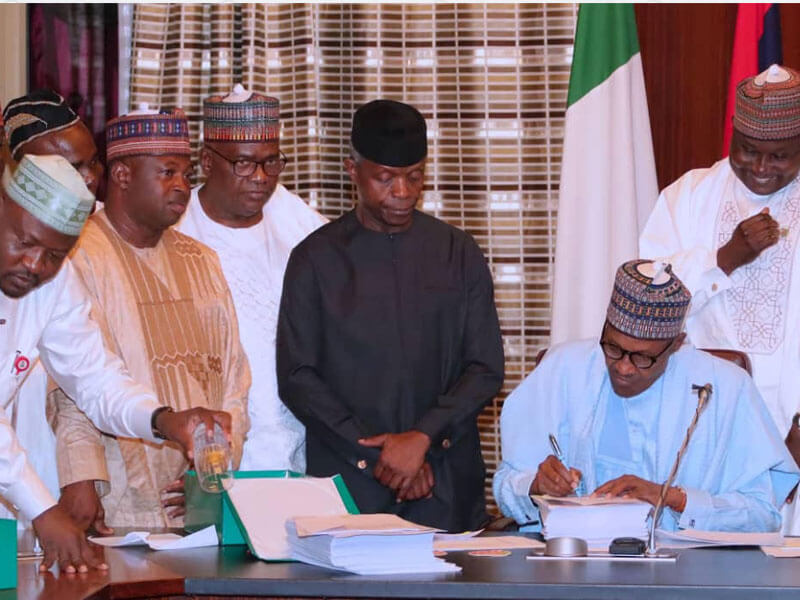 The quest of the 36 state governments for a new revenue formula may soon become a reality as President Muhammadu Buhari is set to inaugurate the board of the Revenue Mobilisation, Allocation and Fiscal Commission, on Thursday (today).

The RMAFC is the body responsible for preparing the formula for sharing revenues among the three tiers of government in the country.

The body is also responsible for fixing the remuneration of political office holders as well as monitoring the revenues accruing to the federation account from revenue-generating agencies.

Our correspondent learnt that 30 new members of the commission would be inaugurated at the State House, Abuja. The commission is made up of 37 members with each state of the federation and the Federal Capital Territory represented by one commissioner.

The inauguration will end more than three years of the revenue body without substantive leadership. It will also end the inability of the body to make policy decisions for lack of quorum given that the commission had progressively diminished in the number of commissioners.

Although Buhari had in July 2016 announced the reappointment of Mr Elias Mbam as the Chairman of the commission, his name was not sent to the National Assembly until recently when it became necessary to fill the depleted body.

Mbam left the commission in November 2015 after the end of his first five-year tenure.

Some of the major tasks facing the commission as it is inaugurated include giving the nation a new revenue formula which constitutionally is supposed to be reviewed every five years.

The commission may also feel the pressure to review the remunerations of political office holders in the country which many Nigerians think are outsized and do not reflect the reality in an economy that has been facing declining revenues.

Although the commission had completed work on both new revenue formula and remuneration package for political office holders, the processes were not concluded because the documents were not presented to the National Assembly by the President.

State governors had recently hinged the payment of N30, 000 minimum wage on the review of the revenue formula in a way that would give the states more substantial resources.

Revenue sharing formula which has remained a controversial subject in Nigeria even before independence in 1960 refers to the proportion of resources accruing to the federation that goes to each component of the federation.

It also defines the proportion of resources that must be retained in the territories where they are generated as well as what goes to the agencies of government that collect the revenues on behalf of the federation.

Currently, 13 per cent of mineral resources known as derivation go to oil and solid minerals producing states. Four per cent of the money collected by Nigeria Customs Services is given to the organisation as the cost of collection.

Similarly, the Federal Inland Revenue Services receives seven per cent of the money it collected to cater for the cost of collection.

After these deductions, both mineral and non-mineral revenues are pulled together into the federation account and shared among the three tiers of government.

At present, the Federal Government gets 52.68 per cent. The state governments get 26.72 per cent while the Local Government Councils get 20.6 per cent.

From Value Added Tax, four per cent cost of collection is assigned to FIRS.

After these deductions, the net revenue is shared among the three tiers of government in the proportion of the Federal Government, 15 per cent; state governments, 50 per cent, and Local Government Councils, 35 per cent.