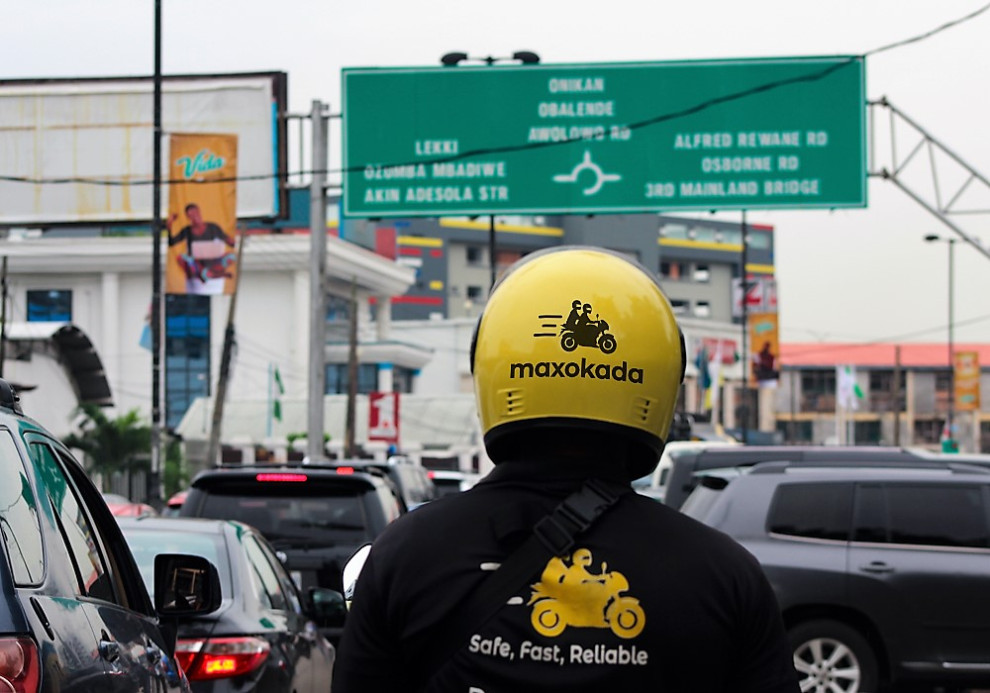 Max.ng, one of Nigeria’s motorbike startups, has raised $7 million from some of the top investors in the world to expand its business operations in West Africa.

The app-based motorcycle startup raised six million of the investment in Series A funding and another $1 million in grants.

MAX has now raised a total of $9 million in funding.

According to Guy-Bertrand Njoya, MAX’s CFO, the company will use the fund to push its expansion drive to 10 cities in West Africa and add new vehicle classes –including watercraft and three-wheeled tuk tuk taxis.

“We intend to invest massively in our technology capabilities,” he said.

This is the company’s second investment in a ride-hailing company in emerging market within a year after investing about $150 million in Grab, a Southeast Asian taxi company.

Similarly, Gokada, MAX’s competitor raised $5.3 million two months ago to expand and has since launched a Gboat service to transport people through the waterways.

However, MAX co-founder, Chinedu Azodoh, said the company is not scared to compete given its edge.

“We’re a very driver-centric business and at the end of the day the driver is where the business is at. If we find that maybe there’s something else we’re missing out on, we’re happy to jump into that.”

Vodacom to Sell Nigerian Operation and Three others 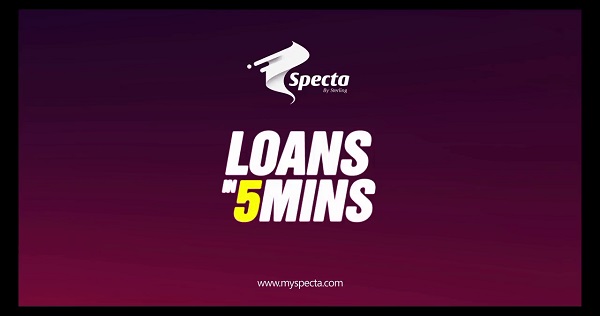 Online instant lending platform, Specta and PaywithSpecta, a digital credit solution introduced by Sterling Bank has disclosed that it has disbursed over N100 billion in digital loans and about N5 billion digital credits, respectively.

Both solutions make loans and digital credits available in less than five minutes to banked Nigerians, irrespective of their bank, without paperwork and collateral.

But above all, they are also the best in the segment for providing the best lending rates and interest free funding up to 90 days for online and offline purchases.

Divisional Head, Retail and Consumer Banking at Sterling Bank, Mr. Shina Atilola, in a statement made available to the press explained: “Specta has disbursed about N100 billion in digital loans in three years. It is an important milestone worth celebrating by a platform that revolutionised and opened digital lending space in Nigeria.

“PaywithSpecta, the digital credit solution extension of Specta has also exceeded expectations. In a few months, it has provided over N5 billion in digital credits to Nigerians.

“We are proud to be at the forefront of deploying innovative solutions that meet the needs of everyday Nigerians and small businesses. Our profound gratitude to our esteemed retail customers and business owners for their loyalty that has made Specta and PaywithSpecta the country’s undisputed market leaders in digital lending and credit solution segments.”

Specta, an instant lending platform that offers up to five million naira consumer loans in five minutes, was unveiled in 2018 by Sterling Bank Plc.

The lending platform uses proprietary data and analytics to process and disburse consumer loans to borrowers who belong to pre-approved communities in less than five minutes without paperwork and collateral.

The types of loans offered include personal, payday, wedding finance, rent, education, and medical finance loans, among others, to salary earners and business owners.

Following the success of Specta, Sterling Bank recently creed another variant of it known as PaywithSpecta to enable customers to pay for goods in instalments. At the same time, Merchants are credited instantly, thereby helping businesses to increase sales.

The tech-driven health care company is expected to expand access to quality Medicare for millions and revolutionize the health care value chain in Nigeria.

Feelers from a reliable source indicate that the management of Konga has secured all pending statutory approvals for the formal launch of the company. Further, the source disclosed that the management of Konga has been testing its robust technology, nationwide logistics; as well as its payment platforms in partnership with local and international players in the sector; ahead of the rollout in order to achieve a seamless experience from launch.

Meanwhile, the expected debut of Konga Health has also been confirmed by a confidential source at Konga.

The source, who spoke on the condition of anonymity, revealed that the startup will radically improve the speed at which quality drugs are delivered nationwide to pharmacies, hospitals and other health services providers; while also boosting structured last mile delivery to patients and other end-users across Nigeria.

In addition, he disclosed that Konga Health will power an unprecedented level of digital health democracy in Nigeria; adding that the company may possibly launch a globally rated blood bank across the six geo-political regions in Nigeria; using cloud-based digital sensors to monitor secure cold rooms in its facilities.

‘‘I can assure you that it is an ambitious project which serious local and international donor agencies; government at all levels, the public sector and corporate organizations will leverage to deliver quality health programs; backed by reliable data at the least cost to the remotest villages,’’ the source stated.

Konga Health was initially due for launch in September 2019.

However, the management of Konga had pushed back the rollout due to delays encountered with approvals from statutory bodies.

Jack Dorsey, Twitter co-founder on Monday announced Ghana has been chosen as African Headquarters over Nigeria despite the tech giant having the largest African users and revenue from Nigeria.

The announcement was made by both Dorsey and Nana Akufo-Addo, President of Ghana.

“The choice of Ghana as HQ for Twitter’s Africa operations is excellent news. Government and Ghanaians welcome very much this announcement and the confidence reposed in our country,” said Ghanaian President Nana Akufo-Addo.

President Akufo-Addo, who held a virtual meeting with Jack last week, said  “As I indicated to Jack in our virtual meeting on 7th April 2021, this is the start of a beautiful partnership between Twitter and Ghana, which is critical for the development of Ghana’s hugely important tech sector. These are exciting times to be in and to do business in Ghana.”

It was shocking that in spite of Dorsey visiting Nigeria, investing and supporting several startups like Mark Zuckerberg has been doing since he first visited Africa’s largest economy, there were several issues like unclear policy path, basic amenities, unnecessary bottleneck because of bribery, etc that were more imperative to Twitter future in Africa than what Nigeria is presently offering despite its potential.

While it was obvious that Nigeria remains a target given its huge potentials, Twitter preferred to operate from outside with manageable proximity unlike if it was in South Africa like Facebook.

According to Twitter, in a statement released on Monday, the decision was based on Ghana’s openness towards the internet and handling of AfCFTA released matters.

“As a champion for democracy, Ghana is a supporter of free speech, online freedom, and the Open Internet, of which Twitter is also an advocate. Furthermore, Ghana’s recent appointment to host The Secretariat of the African Continental Free Trade Area aligns with our overarching goal to establish a presence in the region that will support our efforts to improve and tailor our service across Africa,” the statement read.

As a Nigerian, this is not good given that we have a huge unemployment rate at 33.33 percent, a weak GDP growth rate at 0.11 percent, a rising inflation rate at over 17 percent, weak revenue generation and low foreign reserves. This would have been an opportunity to boost each of those metrics and also sell the nation as a true tech hub to other establishments.

In recent months, several of Nigeria’s startups have raised huge capital with the latest coming from Appzone that raised $10 million after Paystack was acquired for over $200 million. Kuda Bank, Bankly, etc have gone on to raised mouthwatering amounts to further deepen their presence across Africa but lack of infrastructure, stable policy and genuine internet openness continue to impede Nigeria’s true potential as leading Africa’s tech nation.

Twitter immediately commenced recruitment in Ghana on Monday in an effort to hit the ground running. 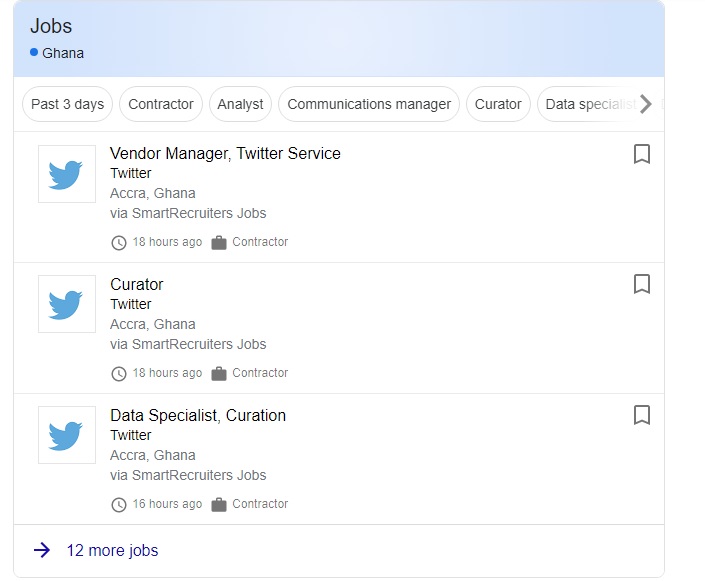