Prof. Mahmoud Yakubu, INEC Chairman disclosed this at a press conference in Abuja.

Yakubu, however, said all the uncollected PVCs had been deposited at the Central Bank of Nigeria.

The Chairman said Lagos has the highest number of collected PVCs, which stood at 5.5 million, while Ekiti State has the lowest with 666,591 cards collected so far. 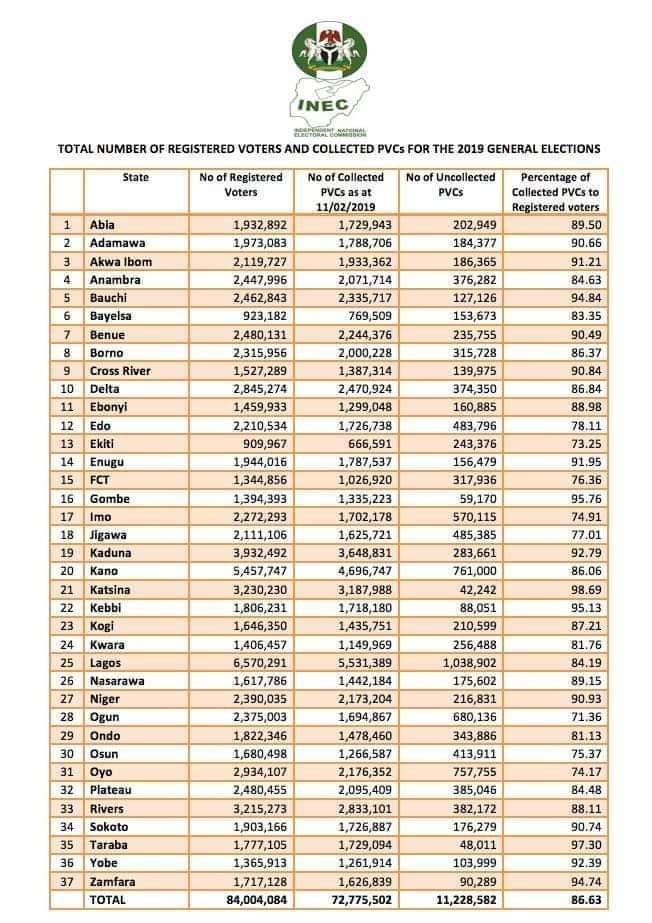 On Wednesday, the federal government of Nigeria approved $11.17 billion for the construction of rail line to link all of Nigeria’s coastal cities in six years.

According to the minister of Information and Culture, Lai Mohammed, the funds was approved by the cabinet at their meeting presided over by Vice President Yemi Osinbajo.

Mohammed said that the Minister of Transportation, Rotimi Amaechi, presented two memos which had to do with Federal Government’s commitment to expanding and consolidating on the rail project.

“Actually, what was approved today was funding to ensure that work starts immediately on those two rails.

“And then, also another memo that was approved today was the ratification of the president’s approval for the award of contract for the Lagos-Calabar Coastal Standard Gauge.”

He said the project was an old project which was inherited by current administration.

Mohammed said that under the former administration, approval was given but nothing was done.

“Today, the council has given approval to commence the Lagos-Calabar Coastal rail.

“This particular route is very important because after the Lagos-Kano route, this Lagos-Calabar Coastal route actually will link all the coastal cities in the country.

“Actually, the proposed route alignment is as follows; it will go from Lagos to Sagamu, Sagamu to Ijebu-Ode, Ijebu-Ode to Ore, Ore to Benin City, Benin-City to Sapele, Sapele to Warri, Warri to Yenogoa, Yenegoa to Port Harcourt, Port Harcourt to Aba, Aba to Uyo, Uyo to Calabar, Calabar to Akamkpa to Ikom, Obudu Ranch with branch lines from Benin-City to Agbo, Ogwashi-ukwu, Asaba, Onitsha and Onitsha Bridge and then Port Harcourt to Onne Deep Sea Port.

“This particular route is very important especially for our coastal economy; the cost of the project is $11.17 billion,” he said.

According to him, the project is expected to be completed in six years.

Protecting Africa’s wildlife from unstainable and illegal harvest and trade and the contribution legal trade and use can provide towards livelihoods and development of Africa’s people is at the heart of a newly signed Memorandum of Understanding between TRAFFIC and the African Union Commission (AUC).

Under this agreement, the parties will collaborate to support the African Union Member States’ policies for environment, wildlife management and trade, and conservation and recognise that wild flora and fauna loss affect African people’s livelihoods, especially during post-pandemic recovery. It acts as a framework to combat the illegal exploitation and trade in Africa’s rich wildlife with a joint goal of protecting flora, and fauna on land, wetlands, and marine ecosystems.

The Memorandum of Understanding is a significant step towards implementing the African Union’s Wildlife Strategy and was signed by Her Excellency Ambassador Josefa Sacko, AUC Commissioner for Agriculture, Rural Development, Blue Economy and Sustainable Environment (ARBE) and Steven Broad, TRAFFIC Executive Director.

On the occasion of the signing, the MoU, H.E. Amb. Josefa Sacko, AUC Commissioner for Agriculture, Rural Development, Blue Economy and Sustainable Environment (ARBE) states: “For the African Union, this is an important MoU for the safeguarding of Africa’s wild biodiversity. We are looking forward to deepening our already great collaboration with TRAFFIC and are welcoming TRAFFIC’s technical support and policy which stems from its evidence-based experience, on how to keep the use and trade of wild-harvested flora and fauna at legal and sustainable and levels, and on how to best combat any illegal trade and overexploitation threatening our biodiversity.”

“We are committed to improving the sustainability of Africa’s wildlife, environment and legal trade to support national economies and local development across the continent alongside the African Union Commission. It is a promising and welcome step towards sustainable wildlife trade in Africa” said Richard Scobey, Executive Director for TRAFFIC.

With 45 years of experience, a global network of expertise and ongoing projects in the field, TRAFFIC will provide the AUC and its Member States with the latest evidence-based technical guidance to implement sustainable natural resource strategies that support national economies and local community development. Existing TRAFFIC projects like Reducing Illegal Timber Exports already work with communities living adjacent to forests with the legal knowledge and tools to reap the rewards of legal, sustainable forest management.

Additionally, TRAFFIC’s growing portfolio of work with private sector companies along the supply chain including e-commerce, transportation and financial sector companies directly support common interests and sustainable development agendas. TRAFFIC will also collaborate with and support the African Union Commission in the effective implementation of the Green Recovery Action Plan, providing support especially to the ‘Biodiversity and Nature-based Solutions’ component.

On the international front, TRAFFIC will also assist the AU and its Member States to prepare for and build relationships at multilateral summits such as The Convention on Biological Diversity (CBD), the Convention on International Trade in Endangered Species of Wild Fauna and Flora (CITES). These crucial meetings can be informed by holistic and pioneering methods like the Trade in Wildlife eXchange (TWIX) platforms in Central, Southern and Eastern Africa to support the elimination of the illegal trade of Africa’s fauna and flora. At the same time, other international TRAFFIC behaviour change projects work across the globe to reduce demand for illegally and unsustainably harvested wild fauna and flora at the end of the supply chain, whilst supporting choices for wildlife stemming from sustainable and legal sources.

H.E. Amb. Josefa Sacko continues to express: “The AU is further looking forward to co-operating with TRAFFIC in preparations for key multilateral and bilateral fora, such as for example for CBD and CITES, as well as for the environmental components of the Commission’s frameworks and partnerships. We hope that African negotiators participating at such fora can be better capacitated.”

We also welcome TRAFFIC’s commitment to collaborate with and support the Commission in the effective implementation of the Green Recovery Action Plan, providing support especially to the ‘Biodiversity and Nature-based Solutions’ component to which we can bring considerable technical expertise and international experience.”

Existing intergovernmental relationships between the AU and the Member States allow coordination with the relevant ministry departments and other government sectors. In a post-pandemic world, not only will this be vital for conservation and development but will enable sound and evidence-based responses to zoonoses-induced threats stemming from wildlife trade.

The Oyo State Government has signed a memorandum of understanding with the CSS Global Integrated Farms in Nasarawa State to train 3,300 youths from the state on agriculture and agribusiness.

The state governor, Seyi Makinde, made this disclosure at the Stakeholders Consultative Meeting on the 2022 Budget, noting that the move is part of measures being taken by his administration to address the challenges of youth unrest and youth unemployment.

He equally explained that the state government’s decision to reconstruct the Oyo-Iseyin federal road was borne out of the need to prevent the state’s investments in the Fashola Agribusiness Hub from becoming a waste as a result of lack of road access.

A statement by the Chief Press Secretary to the governor, Mr Taiwo Adisa, quoted him as explaining that the training will have 150 participants per batch and that the first batch is to begin training this week.

“I am happy to tell you that we just signed an MoU with CSS Farms in Nasarawa State to assist us in training 3,300 youths in agriculture and agribusiness.

“The training will last two weeks. The first set will start on August 1, and there will be 150 participants for every batch. By the end of August, we would have trained 600 of them.”

Governor Makinde, who stated that his administration will do everything to ensure that youths in the state are meaningfully engaged, said he has also instructed the local governments to set up Direct Labour Agencies, which would absorb the youths to engage in minor construction and other works.

He said: “Our youths have to be meaningfully engaged and we will continue to strive. What I asked them to do in each local government is to set up a Direct Labour Agency, in which a certain amount of money will be earmarked for them every month.

“They will be the ones to be doing culverts, fixing street lights, channelisation of drainages and we have an arrangement with the local government chairmen. As soon as we put the new cabinet in place, I assure you that whoever becomes the new Commissioner for local government matters will drive the process.”

The governor equally said that his administration has been investing heavily in sports development in order to take youths off the streets, saying the investments in the Lekan Salami Stadium and other sporting facilities will soon pay off.

“Some of us have talked about our troublesome youths who are disturbing the peace of our environments because they have nothing doing. This is why the Oyo State Government has committed resources of about N6bn to remodel the Lekan Salami Stadium, not only for football but for other sporting activities.

“We have to be patient with the government so that we don’t lose focus. What you are doing at the community level and what we are doing at the state level, what we need to do is to consolidate, which is the only way we can develop the talents in our communities. We should not relent.

“So, I also want to urge our local government chairmen and chairpersons to develop their programmes to ensure they utilise the sports facilities we have put in place.”

While stating that the state is set to flag off the Oyo-Iseyin Road once it obtains the written approval, Governor Makinde said: “I went to Abuja to meet with the Minister of Works and Housing, Babatunde Raji Fashola. We are hell-bent on the reconstruction and rehabilitation of Oyo-Iseyin road even though it is a federal road.

“This is because we are investing a lot of money in the Fashola farm estate there. If we don’t fix that road, all of that money will go to waste.

“I am happy to report that the Minister was gracious and has given his verbal go-ahead. He asked us to come with the document and it will be signed.”