The British pound surged on Monday to $1.4072 against the U.S. dollar following the report that an agreement between the U.K and European Union was close ahead of their joint meeting later today.

The talks broke down in December when the U.K refused the EU proposal separating the Irish border from the rest of the U.K. 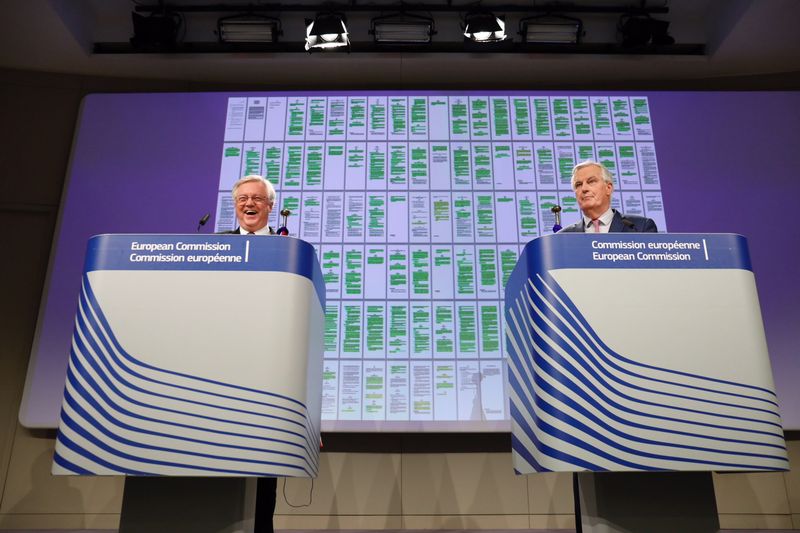 Davis and Barnier with highlighted negotiation documents projected on a screen, in Brussels on March 19.Photographer: Dario Pignatelli

While, the U.K. officials were reported to have said the terms of the transition are already agreed and just waiting to be signed by the U.K.’s Brexit Secretary David Davis and EU counterpart Michel Barnier, experts think any gain in pound now will be temporary, given longer-term challenges faced on trades with the EU that needs to be settled.

“The stronger pound reflects building optimism that a transition deal will be agreed this week,” said Lee Hardman, an analyst at MUFG. “The EU press conference has fueled optimism of a break through in talks over the weekend.”

A positive Brexit deal would further strengthen the odds of the Bank of England raising interest rates as early as May 2018. The chance of the central bank raising rates rose from 5 percent in February to 82 percent in March as more investors continued to price in that possibility.

This is likely to push the probability to almost 100 percent if a transition deal with the EU is reached later today.

“We need to see the language, conditions etc., but this is obviously progress and likely enough to cement a May hike in our view,” said John Wraith, head of macro rates strategy in London at UBS Group AG. “The stakes are going to get rapidly higher so if you’re going to get short-term relief reflected in a stronger sterling, higher short-end rates, a more hawkish MPC, it will prove short-lived,” said Wraith, who sees the pound dropping to $1.37 by year-end.”

The Pound is expected to jump above 1.4105 price level to 1.4208 if the deal materialized with positive acceptance across global financial markets.

However, it is unlikely it will sustain gains above 1.4208 level on a long-term