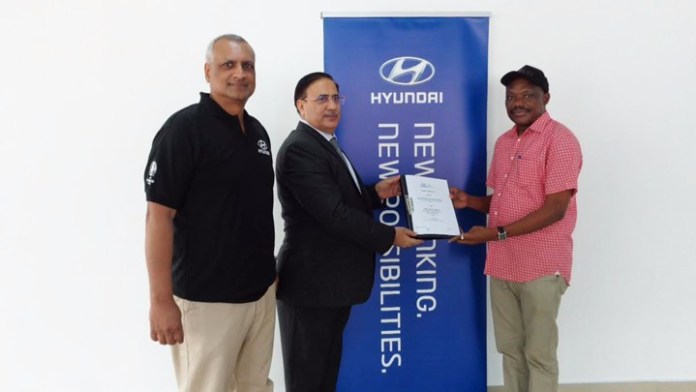 More than a month before the close of 2017, Nigeria has received the first batch of the 2018 edition of the face-lifted Hyundai Sonata.

The new car was unveiled at the Lagos head office of Hyundai Motors Nigeria Limited, a subsidiary of Stallion Autos, last week with the hope of winning more fans and capturing more market share for the segment.

It is said to have been assembled locally at the Hyundai Motors Nigeria plant in Lagos and equipped with numerous other niceties such as the proximity key with push-button start, power driver’s seat as well as shiftronic gear system with courtesy door lamps.

It is described as a comprehensive makeover of its predecessor that had not seen any major changes since 2015.

According to the automaker, the face-lifted Sonata is an adept family hauler that expresses proficient and distinctive gaze that can attract upwardly mobile executives and well-heeled officials as well as anyone with an eye for specifics.

“Suffice to say, there are indeed, no dull moments with the new Sonata, given the so much likes in the stylish sedan that sits five passengers over long distances with an adaptable room to stretch even when stuck in traffic,” the automaker stated.

Specifically, it states that the new midsized Sonata family sedan is coming with a long list of standard and accessible features even as it integrates a perfect mix of high fuel economy and mileage as well as a rare blend of comfort, cavernous trunk and cabin space.

The Head of Sales and Marketing, Hyundai Motors Nigeria

Mr. Gaurav Vashisht, acknowledged the automaker’s perspective when he told local media at the launch of the new Sonata that almost every exterior element of the car had been reworked, beginning from the forward A-pillars.

“Unlike its predecessor, the front end of the car for instance, has become more muscular, blending with Hyundai’s new cascading grille design with an aggressive lower facia, new headlights and a reshaped hood,” Vashisht said.

“When it comes to delivering everything you would expect from a midsize family sedan, the 2018 Hyundai Sonata does not disappoint. It has a spacious interior with worthy seats and a long list of standard features and well-laid out controls that reassures on smooth ride,” he said.

The 2018 Hyundai Sonata is available in six trim levels. But Vashisht said, “Only the Elite SE 2.0-litre and Elite SE 2.4-litre variants, which are already in designated HMNL showrooms, will be marketed locally.”

Both models are however paired to a six-speed automatic transmission that raises the EPA fuel economy numbers to 23mpg highway from 22/31mpg.

“Hyundai may consider the new Sonata its best yet with sales expected to climb higher up the charts, the car could in the foreseeable feature be pitched against arch rivals Honda Accord, Toyota Camry, Ford Fusion, Mazda 6 and Nissan Altima or so it seems,” the firm said.