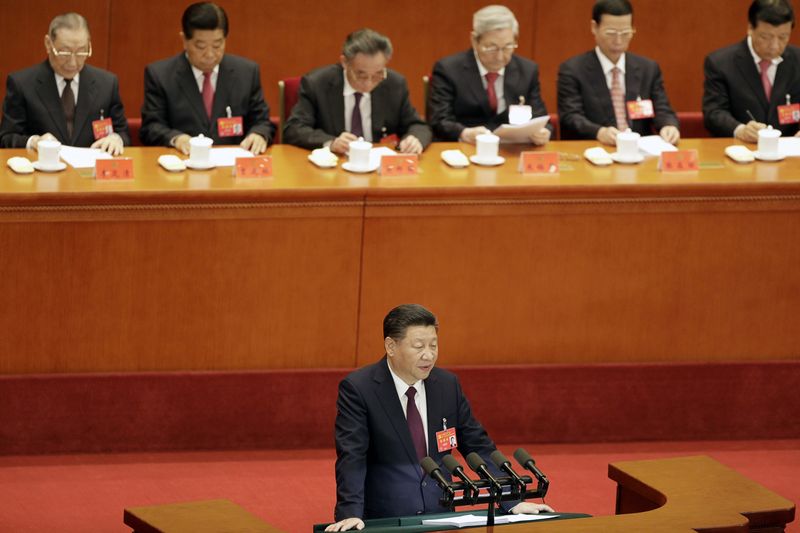 China took a major step toward the long-awaited opening of its financial system, saying it will remove foreign ownership limits on banks and asset-management companies while allowing overseas firms to take majority stakes in local securities ventures and insurers.

The new rules, unveiled at a government briefing on Friday, will give global financial companies unprecedented access to the world’s second-largest economy. The announcement coincides with Donald Trump’s visit to Beijing and bolsters the reform credentials of Chinese President Xi Jinping less than a month after he cemented his status as the nation’s most powerful leader in decades.

While China has already made big strides in opening its equity and bond markets to foreign investors, international banks and securities firms have long been frustrated by ownership caps that made them marginal players in one of the fastest-expanding financial systems on Earth.

Those who enter China will face plenty of risks, including competition from state-owned players and the threat of rising defaults, but optimists say the opening will create new opportunities for foreign firms and make the domestic financial system more efficient.

“It’s a key message that China continues to open up and make its financial markets more international and market-oriented,” said Shen Jianguang, chief Asia economist at Mizuho Securities Asia Ltd. in Hong Kong. “How important a role foreign financial firms can play remains to be seen.”

Regulators are drafting detailed rules, which will be released soon, Vice Finance Minister Zhu Guangyao said at the briefing in Beijing. Here’s what we know so far:

Chinese markets took the news in their stride, with the nation’s benchmark Shanghai Composite Index trading little changed after the announcement. Shares of Chinese financial companies were mixed in Hong Kong.

Foreign financial companies applauded the move, with JPMorgan Chase & Co. and Morgan Stanley saying in statements that they’re committed to China. UBS Group AG said it will continue to push for an increased stake in its Chinese joint venture.

Policy makers had hinted at an opening in recent months. Just yesterday, China’s Foreign Ministry said entry barriers to sectors such as banking, insurance, securities and funds would be “substantially” eased “in accordance to China’s own timetable and road map.” People’s Bank of China Governor Zhou Xiaochuan, who has spent much of this year amplifying calls for financial reform, advocated greater competition in the financial sector in June.

The announcement’s timing, on the day Trump ended his first visit to China as U.S. president, may help him claim some credit for the opening and for warmer ties between the two world powers, but the decision was almost certainly the result of long behind-the-scenes planning by Chinese authorities, according to Iris Pang, a China economist at ING Groep NV in Hong Kong.

Bloomberg News reported in September that the PBOC was drafting a package of reforms that would give foreign investors greater access to the financial services industry, citing people familiar with the matter. JPMorgan Chief Executive Officer Jamie Dimon said earlier this year that the bank was patiently negotiating with Chinese regulators for structures that would eventually give it full control.

“I believe China has planned for this for a very long time, and now is the right time to announce it because Trump is visiting,” ING’s Pang said. China is likely to push for improved access to U.S. markets for its financial firms, she added.

The relaxed ownership rules follow a period in which most overseas lenders have lost interest in direct stakes in their Chinese counterparts. After sales by Citigroup Inc., Goldman Sachs Group Inc. and others, HSBC Holdings Plc is the only international bank with a major holding — a 19 percent stake in Bank of Communications Co. HSBC has been building its business on the mainland as part of a “pivot to Asia” under outgoing Chief Executive Officer Stuart Gulliver.

Foreign banks held 2.9 trillion yuan ($436 billion) of assets in China at the end of 2016, accounting for 1.26 percent of the nation’s total banking assets, the lowest share since 2003, according to the China Banking Regulatory Commission. They earned 12.8 billion yuan in the nation last year, less than 1 percent of the profits at Chinese counterparts.

Even if they take full control of their China ventures, international financial companies will face multiple challenges. One of the biggest is competition from government-controlled rivals, who currently dominate the nation’s financial system and have longstanding relationships with giant state-owned companies that drive much of China’s economic activity.

Then there’s the country’s record debt burden, which amounts to an estimated 260 percent of gross domestic product after government-run lenders juiced the economy with easy money in recent years to avoid a deep economic slowdown. The country suffered its first onshore corporate bond default in 2014 and has seen at least 20 defaults so far this year. Prominent investors including Hayman Capital Management’s Kyle Bass and billionaire George Soros have warned that the country could be headed for a financial crisis.

Still, there’s little sign of an imminent blowup. Bank earnings in China swelled to 2.1 trillion yuan last year, up four-fold since 2008, and earnings in the securities industry have more than doubled over the same period to 123 billion yuan, according to regulatory data.

Chinese authorities have also taken steps to curb excesses in the banking system, embarking on a campaign this year to clean up some of the nation’s riskiest financial products. The potential influx of foreign capital and expertise could help China manage the aftermath of the credit binge and help prevent a repeat, according to Tom Orlik, the Chief Asia Economist at Bloomberg Economics.

Overseas firms will “calculate the risk-reward margin carefully,” said Raymond Yeung, chief Greater China economist at Australia & New Zealand Banking Group in Hong Kong. “That said, the scale of the market is something they won’t ignore.”