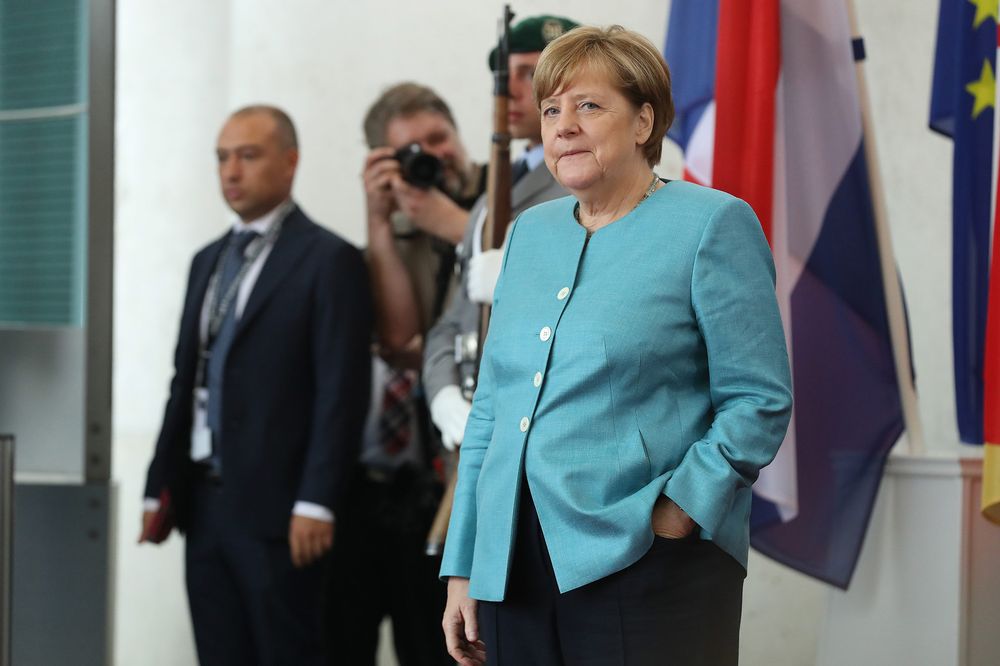 Chinese President Xi Jinping took a swipe at the U.S. for retreating from globalization, exposing the tensions before a meeting of world leaders divided over everything from trade and climate change to handling North Korea’s provocations.

Xi, speaking in Hamburg on Friday at the start of one of the most highly-anticipated summits of Group of 20 nations in years, slammed unnamed “major” developed nations for stoking geopolitical risks through calls to reverse globalization and return to protectionism. China and others must respond by stepping into the leadership vacuum and pressing for their interests, he said.

“Major developed countries have significantly backtracked positions on trade, climate change and other issues,” Xi said before a meeting with fellow leaders from the so-called BRICS group of major developing nations. These developments affect the BRICS nations — Brazil, Russia, India and China — and reinforce the need to step up coordination “to speak in one voice to steer the world economy in right direction,” he said.

Xi’s outspoken remarks hint at the difficult task ahead for German Chancellor Angela Merkel as she chairs the two-day G-20 summit. Already overshadowed by violent clashes between police and anti-globalization protesters, the talks began with an informal session on terrorism. The event will also see the first official meeting between U.S. President Donald Trump and Russian President Vladimir Putin, which will take place around 3:45 p.m.

“I look forward to all meetings today with world leaders, including my meeting with Vladimir Putin,” Trump said in a tweet. “Much to discuss.”

The summit is set to highlight the tensions that are reshaping global politics as the world adjusts to Trump’s election last year. The U.S. will be represented for the first time in decades by a president who embraces protectionism, forcing Germany and China into an informal alliance pushing the merits of free trade and action against climate change.

Participants also face a U.S. leader much more unpredictable than his predecessors, which may concern the Chinese as tempers fray on how best to curtail North Korea’s nuclear ambitions.

“We won’t paper over discord, but rather recognize when there is discord and different views on various topics,” Merkel said Thursday.

So far, the summit in the port city has been dominated by clashes between protesters and police. Protesters harried police on Friday, as they tried to disrupt the summit hours after the authorities used water cannon on a group of about 1,000 people seeking to march to the site of the meeting.

The summit’s official agenda will be dominated by discussions about terrorism, financial regulation, global trade, climate and migration. But the real highlight will be the first meeting between Trump and Putin, which is expected to last about 30 minutes. The U.S. president’s initial months in office have been dominated by the fallout from Russia’s meddling in the U.S. election and allegations about collusion between his campaign officials and the Kremlin.

Issues between the nations include Russian sanctions, halting North Korea’s nuclear weapons program and managing frictions over Syria and Iran. Amid suspicions of further Russian interference, this time in U.S. power plants, it’s still not clear whether Trump will raise the hacking issue.

Both sides played down expectations, portraying the meeting mostly as a chance for the leaders to take the measure of each other. The goal of improved ties has met fierce resistance from some in the Washington establishment.

Trump’s meeting with Xi, scheduled for Saturday, is also one to watch. Chinese officials have struck an optimistic tone — even going so far as to single out the “Art of the Deal” as a book to be read “with respect,” in a press conference Thursday. But Xi’s latest comments underscore how the friendship struck up with Trump at Mar-a-Lago in April is fraying.

Trump initially backed off campaign threats to declare China a currency manipulator following his shock election victory in November, seeking China’s help on North Korea. But he has since shown signs of losing patience as Pyongyang tests missile after missile, including what the U.S. said was its first intercontinental ballistic missile on Tuesday. “So much for China working with us – but we had to give it a try!” Trump said in a tweet Wednesday.

Ultimately, Merkel will have the toughest job at the summit as she tries to steer a path through the divisions to produce a communique everyone can agree on. She is reluctant, for example, for the U.S. to seem too isolated after a G-7 summit in Sicily that was marred by a bitter disagreement between Trump and other leaders over climate change. The president declared his intention to pull out of the Paris Accord just days later.

“I will do all I can to find compromises and answers to the questions that are important for shaping globalization,” Merkel told reporters on Thursday. “Naturally climate will also play a role here, and as you can imagine, there will be discussions here that won’t be all that easy.”