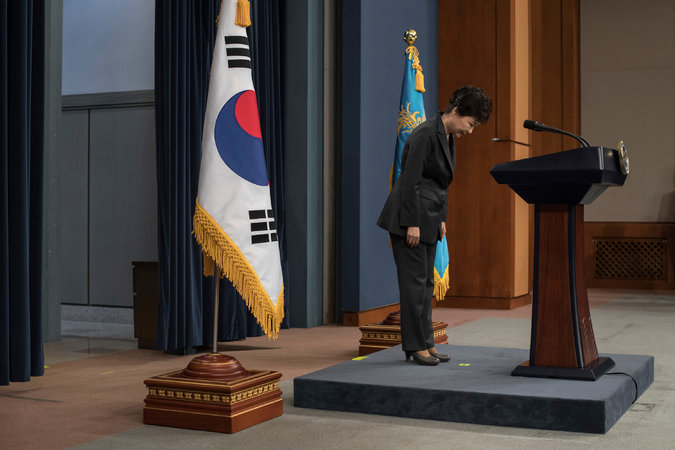 South Korea’s ousted president Park Geun-Hye was questioned by prosecutors Tuesday about the corruption and abuse of power scandal that brought her down, after using executive privilege to avoid them for months while in office.

Park apologised to the public as she arrived at the prosecutors’ office in Seoul, adding: “I will undergo the investigation sincerely.”

The nation’s first female president was impeached by parliament in December as millions took to the streets to demand her removal over the sprawling scandal, which has exposed the links between politics and business in Asia’s fourth-largest economy.

Her dismissal was confirmed by the country’s top court earlier this month, ending the political career of a woman who grew up in the presidential palace as the daughter of army-backed dictator Park Chung-Hee.

As a private citizen once again, Park’s convoy drove at walking pace through crowds of flag-waving supporters lining the street outside her home — some of them lying on the pavement to try to block her exit before she left.

Every inch of the journey was covered live on television, with cameramen trailing the vehicles in cars and on motorcycles and at fixed points along the route.

Questioning by prosecutors is a key step in South Korea’s judicial process before a suspect is charged. It can last for many hours, late into the night, and can be repeated if officials deem it necessary.

Park faced two prosecutors and an investigator and was accompanied by one of her lawyers, but standard procedure bars him from interjecting, only allowing consultations during rest breaks — which could be an issue for her.

The 65-year-old has a reputation for fastidiousness and as president reportedly refused to use toilets that had been employed by others.

She had a packed lunch of seaweed rice rolls and sandwiches brought by one of her security guards, South Korea’s Yonhap news agency said.

“She has been cooperating well,” it quoted a prosecutor as saying, adding she would return home after the questioning.

The interrogators were addressing her as “Madam president”, he added, but in the transcript she was referred to as “suspect”.

Park faces multiple charges ranging from abuse of power and coercion to bribery. She is the fourth former South Korean leader to be probed or jailed over corruption scandals.

Two former army-backed leaders who served in the 1980s to 1990s — Chun Doo-Hwan and Roh Tae-Woo — served prison terms for bribery after they stepped down.

Roh Moo-Hyun, who served from 2003 to 2008, killed himself by jumping off a cliff after being probed by prosecutors over corruption allegations in 2009.

Park has been named as an accomplice to her secret confidante at the heart of the scandal, Choi Soon-Sil.

Park is accused of offering governmental favours to the business tycoons who enriched Choi.

The former leader is also accused of letting Choi, who had no official title or security clearance, handle a wide range of state affairs including nomination of top officials or diplomats.

Park also allegedly forced her aides to create a “blacklist” of thousands of artists who had voiced criticism of her, in order to stop offering their projects state subsidies.

Prosecutors have accused her of pressing local businesses including Hyundai and steelmaker Posco to award lucrative deals to firms or individuals linked with Choi.

The ex-president has repeatedly denied any wrongdoing and blamed her friend for abusing their friendship.

Choi is on trial at Seoul Central District Court — a few hundred metres from the scene of Park’s interrogation — on charges including abuse of power and coercion.
Samsung heir Lee Jae-Yong has also been arrested and indicted for bribery and other offences.

Park won the 2012 presidential vote largely thanks to the popularity of her late father among the aged conservative voters who benefited from rapid economic growth under his iron-fisted rule from 1961-1979. But the scandal sent her once-bulletproof support ratings to record lows.

An election to choose her successor will be held on May 9 with Moon Jae-In, her rival in 2012 and a former leader of the main liberal opposition Democratic Party, leading polls by large margins.