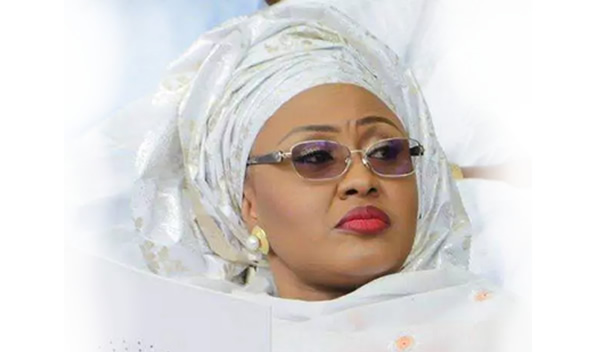 The First Lady, Aisha Buhari on Wednesday congratulated acting President Yemi Osinbajo on his 60th birthday, saying that Osinbajo has developed the ability to lead Nigeria in line with the manifesto of the All Progressives Congress (APC).

The president’s wife felicitated with Osinbajo via her Twitter handle @aishambuhari.

She wrote: “On the occasion of the birthday of Your Excellency, Prof. Yemi Osinbajo (SAN), Ag. President of the Federal Republic of Nigeria.

“I wish to extend my congratulations to you and to state that the years you have spent building your reputation in multiple capacities, have today resulted in your ability to carry out your duties in line with the manifesto of the All Progressives Congress (APC) to ensure that a better Nigeria is realised.

The president’s wife, who has displayed a knack for being independent minded, raised eyebrows last year in an interview with BBC, when she admonished her husband for being held hostage by a cabal.

Her remarks forced her husband to remind her that she had no business meddling in politics and that she was better suited to his kitchen and the “other room”. Buhari’s controversial response to his wife’s interview caused another uproar and a series of jokes on the social media.

Also felicitating with Osinbajo on Wednesday, the National Leader of the APC, Chief Bola Tinubu, congratulated him, saying his birthday came at a momentous time this year.

Tinubu, who was instrumental to Osinbajo’s emergence as Buhari’s running mate in the 2015 elections, described the acting president as “a consummate team player who does not seek individual accolades but one, who without personal notoriety or fanfare, does his best to advance the policies and interests of the government in which you serve”.

Osinbajo has been acting as president since President Muhammadu Buhari proceeded on medical leave almost 50 days ago.

“We know that you will have little time to celebrate as your birthday comes at a momentous time this year. As the humble and selfless person you are, you shall be busy promoting the policy agenda of your principal and our president, Muhammadu Buhari.

“You have been a faithful and dedicated lieutenant to our president. We wish you nothing but the best and congratulate your loyal service to him and to our beloved country.

“From my experience working with you when you were the Attorney-General and Commissioner for Justice in Lagos State, I can say that you are a consummate team player who does not seek individual accolades but one who without personal notoriety or fanfare, does his best to advance the policies and interests of the government in which you serve. “As you do your best to serve President Buhari and the nation, I cannot help but wish you the best on the occasion of your 60th birthday.

“As always, you have conducted yourself with the decorum and circumspection your office and this moment require. You have been faithful to the letter in following the guidance and instruction of your principal, President Buhari. I know that you shall continue to do so.”

Responding to the congratulatory messages, which started pouring in on Tuesday, Osinbajo said his life has been the work of God’s grace.

He made the remarks when he spoke to State House correspondents after members of the federal cabinet celebrated his birthday by cutting a cake at the Presidential Villa, Abuja.

Osinbajo said: “Frankly speaking, there is no difference between today and yesterday. It is really a work of grace.

“It is worth thanking God that one is 60 and one is in good health and that one is able to serve one’s country.

“I am happy and fulfilled. I am thankful to God.”

Earlier, the Minister of Agriculture and Rural Development, Chief Audu Ogbeh, who coordinated the small ceremony after the Federal Executive Council (FEC) meeting, described Osinbajo as an unusual man, wishing him many more fruitful years.