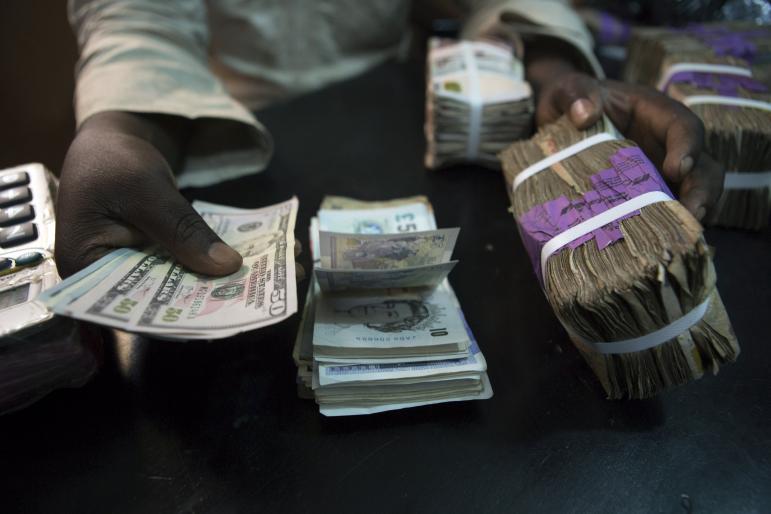 The naira rose to 445 against the United States dollar at the parallel market on Sunday, one week after the Central Bank of Nigeria introduced a new policy measure aimed at boosting foreign exchange supply in the market.

The local currency, which had tumbled to 520/dollar last Monday, closed at 450 on Friday.

The CBN had last Monday commenced the implementation of the reformed forex policy with a promise to sell $1m weekly to each of the 21 commercial banks in the country.

Following the announcement of the new forex policy measure by the CBN on Monday, the naira commenced a gradual reversal of its previous losses, closing at 512/dollar on Tuesday.

It recorded further gain on Wednesday and Thursday, closing at 505/dollar and 495/dollar, respectively.

Foreign exchange traders said the CBN had intervened on the official market in recent days.

Economic and financial experts told our correspondent on Sunday that the naira would record further gain this week but not as big as last week’s.

“There is always a restriction point beyond which the exchange cannot cross except there is a huge forex inflow to breach that ceiling,” a currency analyst at Ecobank Nigeria, Mr. Kunle Ezun, said.

“The naira will gain further but it won’t be like last week’s own.”

The Managing Director, Financial Derivatives Company Limited, Mr. Bismarck Rewane, commended the CBN for the policy reform and wondered why the regulator had delayed such measure for months.

Rewane said, “With less than $600m supply into the spot market, the naira has gained 13 per cent of its value to N460/$ on Friday. Can you imagine what would have happened if the spot market was adequately funded in a transparent manner for nine months ago, rather than the opaque forward transactions.

“Maybe we could have had a soft landing rather than a race to the bottom. This move by the CBN is a good one in the right direction provided the dollar supply is sustained.

“We expect the CBN to commit itself to a regular and predictable supply of dollars to the forex spot market in March. There will be a rapid convergence of rates and a gradual end to multiple exchange rates and forex abuse.”

Chukwu said, “Confidence is beginning to return to the market. The naira will gain further but there may be resistance around N400/dollar because the CBN sells to BDCs currency at 381/dollar.

“The CBN needs to watch and sustain this intervention for weeks. They need to work with the fiscal authority to get the $2.3bn loan from World Bank and China released on time.”

Chukwu, Ezun and other experts advised the CBN to re-admit the banned 41 items into its official forex window.

According to them, there is the need to discourage end-users from going to the parallel market to source for forex.