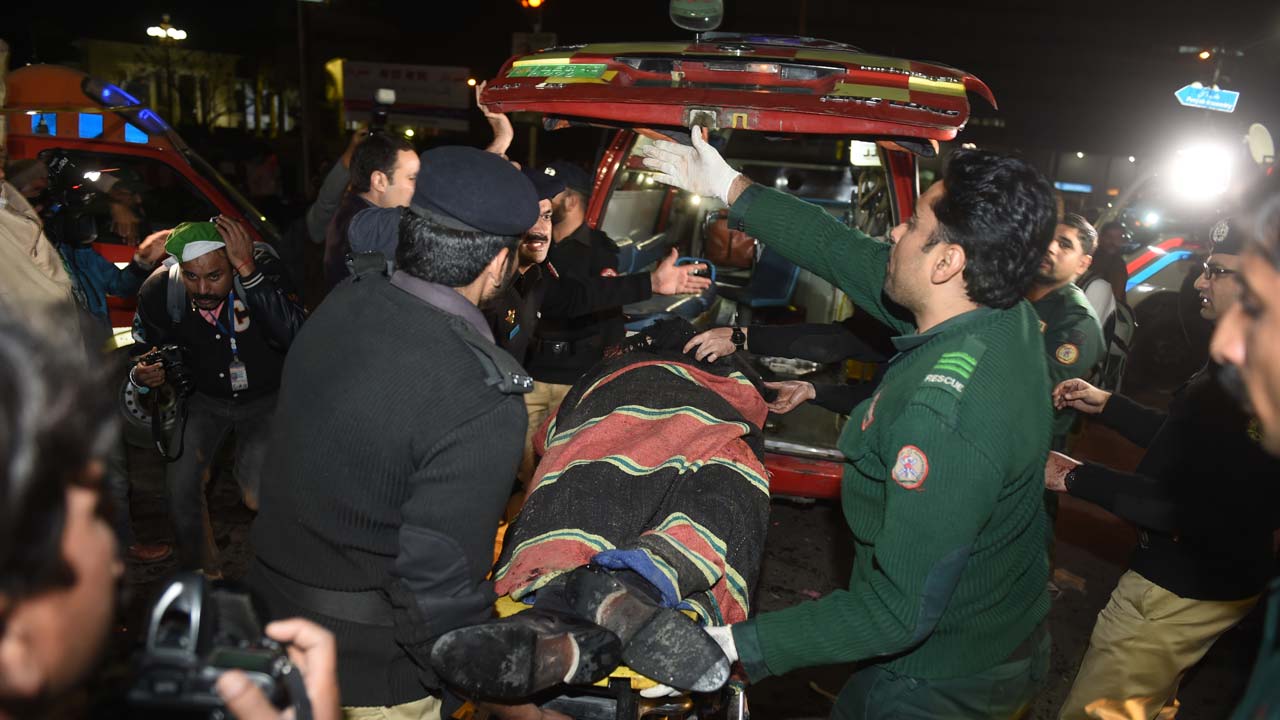 At least 13 people were killed and 82 injured when an apparent Taliban suicide blast ripped through a protest in Lahore on Monday, Pakistani officials said, shattering the city’s growing sense of security.

Police cordoned off the area near the crowded Mall Road, one of the city’s main arteries, as witnesses fled in fear of a second explosion. Local media showed images of the injured being carried away.

The road had been packed with hundreds of people, mainly chemists, protesting provincial government plans to further regulate the medical sector. “The blast was so powerful. I saw the injured and bodies, saw flames surrounding the blast site, people were crying,” witness Muhammad Tariq told AFP.

Chief of police in Punjab province of which Lahore is capital, said at least 13 people including six policemen were killed in the attack. Rescue officials said that at least 82 wounded people had been rushed to city hospitals.

The attack “seems to be a suicide blast”, senior police official Amin Wains said, adding it had apparently targeted police trying to regulate the protest.

The Pakistani Taliban faction Jamaat-ul-Ahrar claimed responsibility for the assault, which came three days after it announced it would carry out a series of attacks on government installations around the country.

A spokesman for the group warned in a statement that Monday’s blast was “just the start”.

Meanwhile, in the southwestern province of Balochistan, two members of a bomb disposal squad were killed in Quetta city when they were attempting to defuse an explosive.

“Commander of Quetta’s bomb disposal squad and his assistant were killed as a bomb went off when they tried to defuse it. At least 11 other people were wounded in this incident,” Abdul Razaq Cheema, a senior police official in Quetta, told AFP.

Lahore, the country’s cultural capital, suffered one of Pakistan’s deadliest attacks during 2016 — a Jamaat-ul-Ahrar suicide bomb in a park over Easter that killed more than 70 including many children.

But such incidents have been rare in the city in recent years, with security across Pakistan improving dramatically in 2015 and 2016 after the military launched a crackdown on extremism backed by a government-led National Action Plan.

“Terrorism isn’t a novelty for us. Our story has been one of constant struggle against its grasp, and a fight for the soul of Pakistan,” he said in a statement.

“We will not stop until we can call ourselves a free and secure people; that is a promise.”

More than 60,000 people have died and $111 billion has been spent in the “staggering” cost of Pakistan’s war on extremism, the Foreign Office said in a statement Monday.

The statement, hitting back at recent criticism out of the US of Pakistan’s role in Afghanistan, also vowed that emerging militant groups such as Islamic State in the region “will not deter Pakistan from continuing its valiant struggle against terrorism”.

Last month a Taliban-claimed bomb blast at a market in a mainly Shiite area of Pakistan’s northwestern tribal belt killed at least 24 people, the first major militant attack in the country in 2017.

Cricket fans on social media voiced fears that Monday’s explosion could derail plans to hold the highly anticipated final of the Pakistan Super League in Lahore.

Pakistan’s international tournaments have been held abroad for years out of security fears, and the second year of the popular Twenty20 tournament is currently being held in the United Arab Emirates.