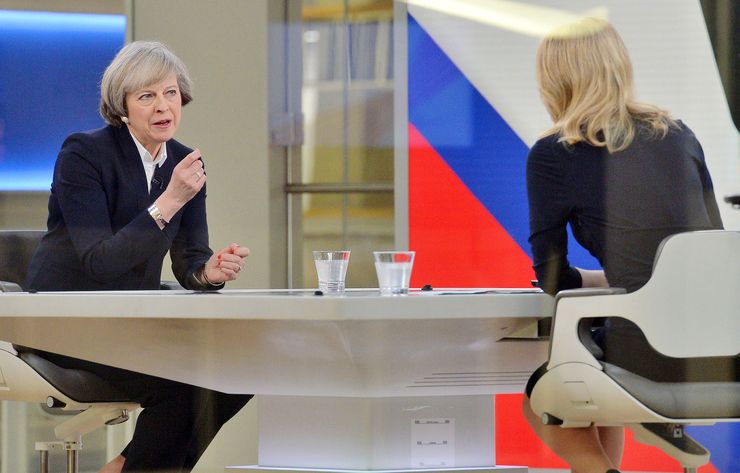 Theresa May has had a torrid start to 2017. On Sunday she made a bid to take back control, signaling that regaining control of immigration and lawmaking are her key priorities in upcoming Brexit talks, even if that costs Britain membership of the single market.

The prime minister told Sky News on Sunday that leaving the European Union will be about “getting the right relationship, not about keeping bits of membership.”

“We are leaving. We are coming out. We are not going to be a member of the EU any longer, so the question is what is the right relationship for the U.K. to have with the European Union when we are outside,” she said.

A report released on Monday by the think tank Civitas outlined how U.K. exporters could be compensated if May can’t strike a free trade deal. It suggested that by levying £13 billion ($15.9 billion) of tariffs on European products, the government could craft an £8.8 billion package of support based on research credits, cash for disadvantaged regions and cheaper energy bills.

May also used the interview to deny the government’s plan to exit the EU is “muddled,” saying she’ll unveil details of her strategy in the coming weeks.

In a bid to broaden her country’s political agenda beyond Brexit by promoting domestic issues, May will on Monday unveil a plan to “transform” attitudes about mental health. Meanwhile, Foreign Secretary Boris Johnson is in New York to meet advisers to President-elect Donald Trump, who tweeted over the weekend that he will meet May in the Spring.

Trade Secretary Liam Fox has identified 50 nations as potential markets as he urges businesses to take advantage of export opportunities, the Press Associated reported. Donor Andrew Cook warned the Conservative Party it will get no more money from him if May withdraws from the single market, according to The Times. Canadian trade expert Jason Langrish told the Observer that Britain risks a “catastrophic Brexit” because a trade deal could take a decade to strike.

Ivan Rogers, who quit last week as ambassador to the EU, told former Prime Minister David Cameron before Christmas that May was botching Brexit, the Sunday Times said. The Mail on Sunday reported that Trump is considering naming Brexit-supporter Professor Ted Malloch as his envoy to Brussels. The Telegraph says takeovers and investment deals in the British tech sector rose by 40% to a new high last year despite the Brexit vote. The Daily Express reported the U.K. wants a share of the 42,000 bottles of wine owned by the EU.

British consumers, who helped the economy emerge largely unscathed from the Brexit vote, now face their next big health check.

Their updates should reveal clues about any changes to household spending patterns, and whether the economy will continue weathering the U.K.’s decision to leave the EU, according to Bloomberg’s Jill Ward and Sam Chambers. A sharp upswing in inflation in expected this year. That, and uncertainty over the economic outlook could test how willing households are to keep on splurging.

The pound fell against the dollar and euro in Asian trading after May’s hints about the single market.

According to Chris Hughes of Bloomberg Gadfly, such gains may explain why foreign takeovers of British companies have been surprisingly few given the fall in sterling.

Investors moved quickly to price in the benefits weaker sterling would give U.K.-listed companies, such as Arm Holdings, that derive a large portion of their revenue from overseas. Companies drawing at least 75 percent of their revenue from outside the U.K. are up about 22 percent since the referendum. That cancels out the pound’s 16 percent fall against the dollar in the same period.

According to Chris Hughes of Bloomberg Gadfly, such gains may explain why foreign takeovers of British companies have been surprisingly few given the fall in sterling.

Investors moved quickly to price in the benefits weaker sterling would give U.K.-listed companies, such as Arm Holdings, that derive a large portion of their revenue from overseas. Companies drawing at least 75 percent of their revenue from outside the U.K. are up about 22 percent since the referendum. That cancels out the pound’s 16 percent fall against the dollar in the same period.

Chastened by how the economy proved more resilient in the wake of the referendum than they anticipated, economists at HSBC and Morgan Stanley are hedging their bets slightly this year.

While both are still predicting slowdowns, each last week outlined scenarios in which the economy again tops expectations.

For that to happen in Morgan Stanley’s eyes there would need to be a “Goldilocks Brexit” in which the U.K. and EU enjoy what the bank’s analysts called a “gentle” split, resulting in better inflation and unemployment pictures than they now project.

Over at HSBC, economist Liz Martins still thinks Brexit will be “disruptive, peppered with uncertainty and detrimental to growth.” But she added that negotiations could go smoothly, allowing the breakup to be extended over time with London-based banks perhaps allowed continued access to the bloc for a while. That might encourage businesses to keep investing and sterling to gain by enough to cool inflation and prompt consumers to spend, she said.

MMM Dumps Naira, to Use Bitcoin