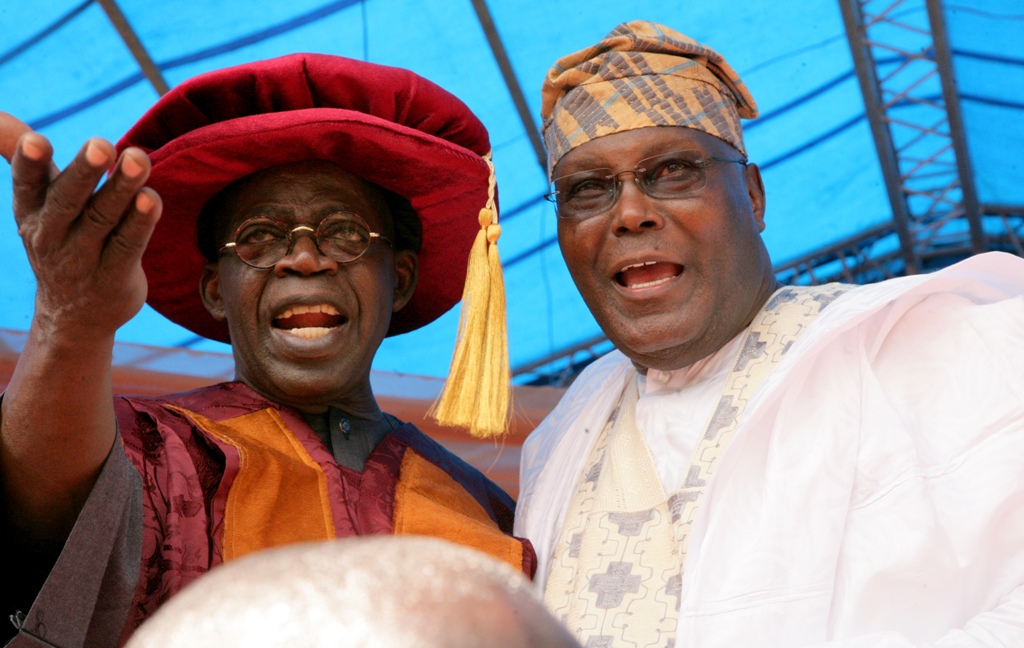 With an eye firmly fixed on the 2018 governorship polls in Ekiti and Osun States and 2019 general election, the movers of the proposed new mega party are already targeting at least 16 states of the federation whose governors they are confident will decamp to the new party, to bolster their chances of unseating the present government of President Muhammadu Buhari. 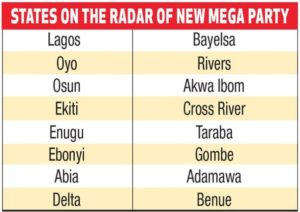 The new opposition party is believed to have the tacit support of the Senator Ahmed Makarfi-led faction of the Peoples Democratic Party (PDP) that currently controls 11 states in the country, a National Leader of the ruling All Progressives Congress (APC), Chief Bola Ahmed Tinbubu, and former Vice-President Atiku Abubakar, a major chieftain of the APC.

Both APC leaders have, however, denied their involvement in the proposed party, saying they remained committed to the APC.

Some of the states being considered for the taking are spread across five crucial geo-political zones of the country, with the calculation that once the new party is able to hold down these states, the others could be turned into battleground states, where it would compete for votes with the APC to shore up its chances in the 2019 elections.

The states already considered to be the strongholds of the proposed mega party are Abia, Ebonyi and Enugu in the South-east; Rivers, Akwa Ibom, Delta, Cross River and Bayelsa in the South-south; Osun, Oyo, Ekiti and Lagos in the South-west; Gombe, Taraba, Adamawa in the North East; and for now Benue State in the North-central zone.

Since the governors of the 16 states are seen to be sympathetic to the cause of the mega party, either directly or indirectly, their membership would most likely be taken for granted, while the party is saddled with the task of concentrating on areas where it is considered to be relatively weak.

The movers behind the new party are of the view that if they must make any meaningful impact in the elections in 2018 and 2019, respectively, then certain states are germane to the victory.

However, whilst the backers of the party are working on a winning strategy, the Makarfi-led PDP, sources confirmed yesterday, has expressed disappointment in the way Atiku and Tinubu denied their involvement in the formation of the new party.

The PDP leadership, while trying to empathise with the concerns Atiku and Tinubu might have over the news of their involvement in the proposed party coming out too early in the day, however, some members of the PDP felt that they should have known what they were up against from the outset.

According to a PDP chieftain, “We would have expected Atiku and Tinubu to have been more strategic in their reactions to the news.

“They just proved that they could develop cold feet at the slightest whiff and are not really prepared to take on the challenges that lie ahead. Their denials could be a setback for the mega party, as there is no way the formation can progress with this kind of attitude.

“We know it is going to be tough, but we must be ready to live with the consequences.”

From the perspective of the PDP, the source said the party was on the verge of putting its house in order and was preparing to start a new chapter, adding that once the challenges related to the leadership tussle are cleared, it would be in a better position to fully concentrate on the talks for a new mega party, which he described as the only joker for the 2019 elections.

He said the argument by some concerned observers about the Makarfi-led PDP not really needing an alliance or merger the minute it settles its leadership crisis may be logical, but noted that the battle to unseat an incumbent president in Nigeria was not an easy one to be prosecuted by one party alone however strong, hence the need for co-operation from people of like-minds to pool resources.

He noted that with the PDP going into talks with anyone as a united family, this would give it better grounds for negotiations and that the concerns about anyone selling out or undoing the party would be unfounded once the other faction has been completely neutralised.

“At least, we know that the Ali Modu Sheriff faction is working for and with the APC. So, the fears about the kind of damage they could do would have been adequately checkmated with their exit.
“The collaboration is therefore important and key to the success of our collective plan to take over the government and lead the nation to a better place,” he said.

He described the issue of the presidential candidacy as too early in the day since the consolidation of the proposed party was yet to take place.

“It is true that the APC wing of the proposed party might have been pondering their options on the choice of candidate for the presidency, but the PDP too has its own take on all of this and there are many options from which the ideal candidate can be chosen.

“But first, we need to tidy up the amalgamation and other things will follow,” he said.

The source did not however dismiss the influence of former President Olusegun Obasanjo on the choice of a presidential candidate for the mega party, but expressed concern about Obasanjo’s opposition to Atiku and former President Goodluck Jonathan, both of whom he said the former president had vowed never to have anything to do with.

“His take on Atiku is particularly worrisome because he once said even if he dies today and Atiku was coasting home to the presidency, he would beg God to let him come back to life, finish him off and then return to God.

“You may want to laugh this off, but it is deep and speaks so much about his disdain for these two persons, Atiku especially,” he said.