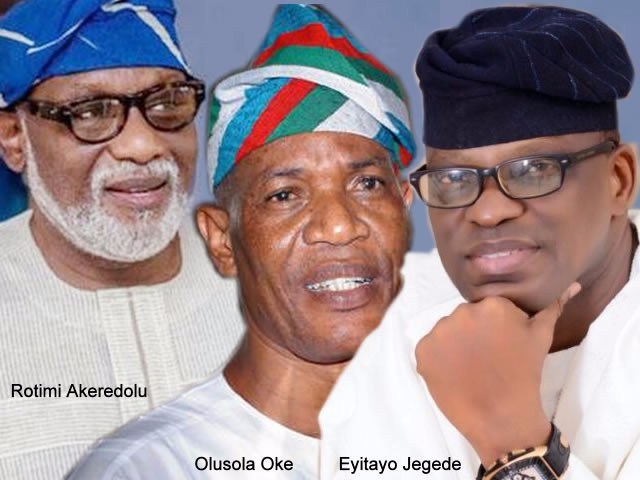 The leading candidates in yesterday’s governorship election in Ondo State retained their traditional strongholds in the three senatorial districts of the state, as early results showed them scoring victories in the areas where they hail from.

The All Progressives Congress candidate, Rotimi Akeredolu, maintained a comfortable lead in many of the polling units in his native Owo, in Ondo North senatorial zone, just like the candidate of the Peoples Democratic Party, Eyitayo Jegede, in Akure, Ondo Central. The candidate of the Alliance for Democracy, Oluwole Oke, equally won in majority of the polling units in Ilaje and Okitipupa areas, Ondo South senatorial district, where he comes from.

The election was largely peaceful across the state. There was virtually no major security breach, contrary to fears that the widespread pre-election tensions might give rise to violence in many areas.

Voting started as early as 8am in many polling units and electoral materials got to the polling centres early. However, what looked like an impressive turn-out of voters in many places in the early hours of the day did not translate to massive votes in the results released after the completion of voting in many of the polling units.

There were isolated reports of card reader malfunction in some units, including the unit where the state governor, Olusegun Mimiko, voted. The card reader deployed to Unit 20 Ward 7, Ondo West Local Government Area, could not recognise Mimiko’s fingerprint. He was consequently given the incident form, which he completed before he was allowed to cast his vote about 11.30am.

The governor lamented the failure of the card reader.

Mimiko also alleged monetary inducement of voters, saying the people of the state would resist any manipulation of the electoral process.

In Ondo South, there were reports that the card readers in some communities were not functioning well, particularly in Ilaje Local Government Area. It was gathered that the machine in some instances started counting from 200 or 300, instead of counting from 001, an indication that such numbers of people had voted. This case was said to have occurred mainly at Constituency II in Ilaje Local Government Area.

The matter was reported by the candidate of AD, Oke, who quickly called on the Resident Electoral Commissioner, Mr Olusegun Agbaje, to intervene. Oke alleged that the card readers were preloaded to give the impression that some people had voted at Alagbon, Idi Ogba Ode Ugbo, and some other places in the constituency.

A major feature of the election was allegations of financial inducement of voters by some candidates. It was gathered that each voter was given as much as N6,000 while about 450,000 was said to have been given to units in some senatorial districts. THISDAY gathered that some governors and a minister had been in the state since four days before the poll to help their party’s candidate.

AD alleged that both the APC and PDP had engaged in rigging through intimidation, heavy monetisation and outright manipulation of the ballot materials in a bid to win the election at all costs. Spokesperson of the Olusola Oke campaign organisation, Mr Bisi Kolawole, said in a release that it was unfortunate that the APC had become an instrument of corruption, despite its change slogan.

Kolawole stated, “They have threatened to win this election at all cost and today they have demonstrated their willingness to make their prediction come true. Our leaders were brutalised and hounded out of their homes in order to scare them and their supporters from the polling booths. They have brought in loads and loads of money to buy votes due to the pangs of hunger which they brought unto the people.

“Yet, they say they are fighting corruption. Again, the PDP too have been attacking us, including our candidate, Chief Olusola Oke. They are now buying votes in the full glare of all shamelessly to continue pillaging the state.

“From all over the state reports have it that cases of electoral manipulations are on-going. The PVC card readers are not functioning properly and appear to have been compromised as they show figures different from what were usually recorded in the accreditation exercise.”

Meanwhile, according to the results from some polling units, at Unit 20 Ward 7, where Mimiko voted, the PDP scored 176 votes against 40 and 25 scored by APC and AD, respectively. Also at Unit 021 in the same ward, PDP polled 92 votes as against the 31 and 23 scored by AD and APC, respectively.

The PDP candidate, Jegede, won at his Unit 009 located at Sacred Heart School, Akure. The results indicated that PDP polled 184 votes, APC got 77, and AD polled 32.

Akeredolu won at his Unit 6 Ward 5 at Oke Ijebu Owo. He polled 413 votes; PDP scored 13 votes, and AD got four votes. He was leading other candidates in the entire local government, which has 83, 639 voters with permanent voter cards.

The Secretary to the State Government, Aderotimi Adelola, lost his own unit to APC at Unit 007, Ayesan Ward, located at St Peter’s Primary School, Araromi Obu, Odigbo Local Government Area. The APC got 113 votes, AD had 79, and PDP had 73 votes.

But PDP alleged that it observed early irregularities in the conduct of the election and poor preparation on the part of the Independent National Electoral Commission and the security agencies. A statement by the party’s spokesman, Dayo Adeyeye, Saturday morning also alleged widespread card reader failure.

According to PDP, “Despite the fact that INEC owns more units of card readers, in several locations there are no back up card readers. As such, many voters are already being deprived of the right to cast a vote for the candidate of their choice.

“In Ward 2 of Akure South Local Government Area, Tunji Light-Ariyo, a known chieftain of the All Progressives Congress was recorded campaigning on behalf of and canvassing for votes for the APC candidate, Chief Rotimi Akeredolu, at PUs 28, 29, and 30, in spite of the prohibition of such actions by the Electoral Act 2010 (as amended).”

PDP said the police and other security agencies did nothing to stop the alleged breach of the electoral law. “We view these incidents for what they are – violations of the law and evidence of the plots to rig the elections in favour of Chief Rotimi Akeredolu. We reiterate our earlier warnings that we will not stand by and watch anyone tamper with the democratic process and subvert the will of the Ondo people,” PDP stated.

As at 2am today, reporters gathered at the INEC headquarters in Akure for the announcement of the official results by the commission, but the exercise was yet to begin at the time of filing this report. Many of the results were still being awaited from the various local government areas.