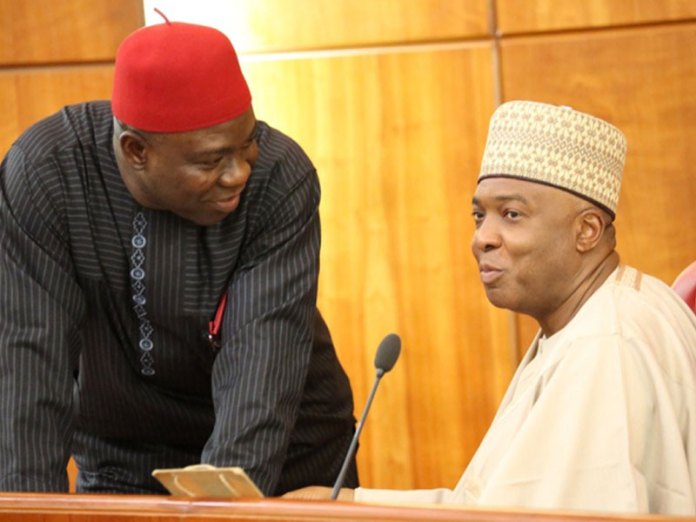 The federal government on Thursday withdrew the charges of criminal conspiracy relating to the alleged forgery of the Senate Standing Orders, 2015, filed against Senate President Bukola Saraki and his deputy, Ike Ekweremadu, at the Abuja High Court.

In doing so, the Ministry of Justice filed an application to amend the charges and attached the amended charges. In the new charges, only the former clerk of the National Assembly, Mr. Salisu Maikasuwa, and a former deputy clerk, Mr. Ben Efeturi, were listed as the accused persons.

Saraki and Ekweremadu were charged alongside Maikasuwa and Efeturi for allegedly forging the Senate Standing Orders. All of them pleaded not guilty to the charges and were granted bail. They were first arraigned before Justice Yusuf Halilu on June 10, 2016.

However, a litigation officer from the Ministry of Justice, Odudu Loveme, yesterday deposed to an affidavit, which was attached to the new charges.

Loveme averred that the prosecutor, Aliyu Umar (SAN), had on September 30, in the Office of the Director of Public Prosecution told him that he had studied the case diary and “had decided to amend the charges in the manner stated on the face of the motion paper”.

He stated that he had consequently filed the amended charges. He said: “That I depose to this affidavit in good faith believing same to be correct to the best of my knowledge and information and in accordance with the Oaths Act Cap 01 Laws of the Federation of Nigeria.”

On the face of the new charge, only Messrs Maikasuwa and Efeturi would now face prosecution.

Count one of the new charge reads: “Salisu Maikasuwa and Benedict Efeturi, on or about the 9th day of June 2015 at the National Assembly Complex, Three Arms Zone, Abuja, within the jurisdiction of this honourable court, agreed to do an illegal act, to wit to make the Senate Standing Orders, 2015 (as amended), without the authority of the 7th Senate of the Federal Republic of Nigeria, which act was committed by yourselves and that you thereby committed the offence of criminal conspiracy.”

They were accused of forging a document punishable under Section 366 of the Penal Code Act (Northern States) Federal Provisions Act, 1960, Cap 345, Laws of the Federation, 1990 (as amended).

The federal government also accused them of giving false information with the intention to mislead the public.

The court had on September 28 adjourned the matter to today, October 7 for commencement of hearing.

Justifying the amendment, Umar said that the sole issue for determination was “whether the court can permit the amendment of the charge in terms of the amended charge”.

According to him, the court has the powers to permit the amendment based on the provisions of Section 216(1) of the Administration of Criminal Justice Act.

The section states that “a court may permit an alteration or an amendment to a charge or framing of a new charge at any time before judgment is pronounced”.

He also quoted Section 216(3), which states that “where a defendant is arraigned for trial on an imperfect or erroneous charge, the court may permit or direct the framing of a new charge, or any amendment to, or the alteration of the original charge”.

When the federal government charged Saraki and Ekweremadu for the alleged forgery, both of them had maintained their innocence, saying that it was politically motivated arising from their emergence as Senate President and Deputy Senate President, respectively.

Their election did not sit well with the presidency and the ruling All Progressives Congress (APC), which had backed Senators Ahmed Lawal and George Akume to lead the Senate.

The decision to withdraw the charges against them may also not be unconnected to weakness of the federal government’s case against them.