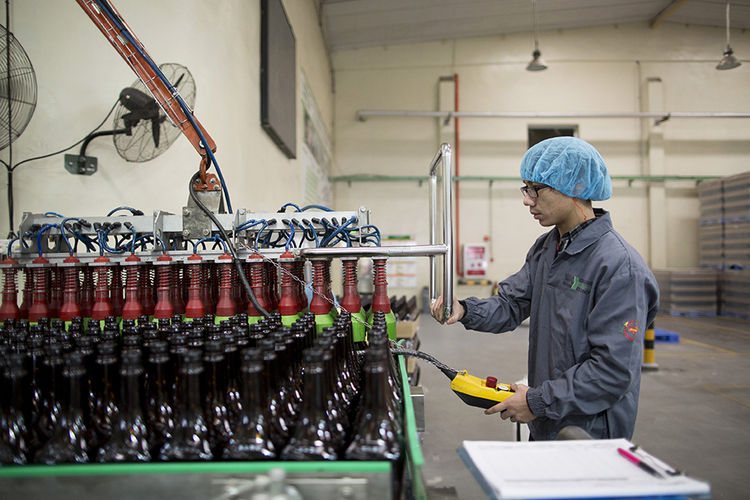 China’s official factory gauge remained above the dividing line that signals improving conditions for a third month, adding to recent evidence of stabilization in the world’s second-largest economy.

The manufacturing purchasing managers index stood at 50.1 in May, the nation’s statistics agency said Wednesday, matching April’s level and compared with median estimate of 50 in a Bloomberg News survey of economists. The non-manufacturing PMI was at 53.1 compared with 53.5 in April. Numbers above 50 indicate improving conditions.

Fresh signs of resilience will be welcomed by policy makers, after weak April readings raised concerns that a first-quarter stabilization was faltering. Authorities are striving to keep economic growth above 6.5 percent this year while keeping a lid on debt and cutting excess capacity in industries like coal and steel.

“The economy is operating steadily right now, but lacking any upward momentum,” said Tao Dong, chief regional economist for Asia excluding Japan at Credit Suisse Group AG in Hong Kong. “The economy will wane again in the summer, and that will be a key test for the PBOC — can it maintain stable policy and focus on supply-side management,” he said, referring to the People’s Bank of China.

Measures of output and purchases quantity rose, with small and medium-sized enterprises picking up, the manufacturing data showed. For the services gauge, declines in input prices and business activity expectations weighed on the index.

The statistics authority warned about upcoming challenges for manufacturers as a gauge for new orders fell for the second month and the index for new export orders dropped. “Demand remains on the weak side, and the base for growth in the manufacturing sector isn’t solid yet,” the statistics bureau said in a statement released with the data.

A separate PMI reading from Caixin Media and Markit Economics fell to 49.2 in May, matching economists’ estimates and down from 49.4 in April.

The lack of any pick-up in external trade underscores the economy’s reliance on domestic industries, said Iris Pang, senior economist for greater China at Natixis SA in Hong Kong.

“Domestic growth is mostly supported by real estate and related industries such as cement and steel, indicating leverage in zombie companies remains high,” she said. “The situation will continue as monetary policy is relaxed and fiscal stimulus is likely to continue.”