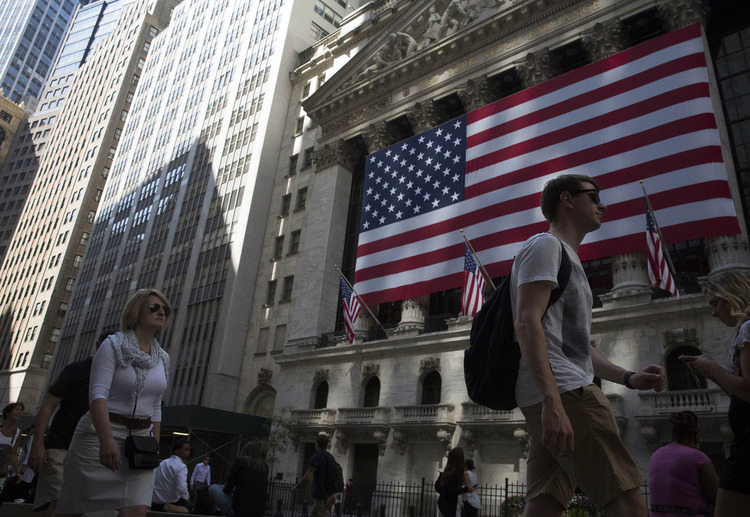 The U.S. economy expanded in the first quarter at the slowest pace in two years as American consumers reined in spending and companies tightened their belts in response to weak global financial conditions and a plunge in oil prices.

Gross domestic product rose at a 0.5 percent annualized rate after a 1.4 percent fourth-quarter advance, Commerce Department data showed Thursday. The increase was less than the 0.7 percent median projection in a Bloomberg survey and marked the third straight disappointing start to a year.

Shaky global markets and oil’s tumble resulted in the biggest business-investment slump in almost seven years, and household purchases climbed the least since early 2015, the data showed. While Federal Reserve officials on Wednesday acknowledged the softness, they also indicated strong hiring and income gains have the potential to reignite consumer spending and propel economic growth.

“The fact that personal consumption is a bit on the soft side is a disappointment, especially in light of the low gasoline prices,” said Thomas Costerg, senior economist at Standard Chartered Bank in New York, who correctly projected first-quarter growth. “Consumption seems to be stuck in a low gear.”

Economists’ projections for GDP, the value of all goods and services produced in the U.S., ranged from gains of 0.1 percent to a 1.5 percent. This is the government’s first of three estimates for the quarter before annual revisions in July.

Household purchases, which account for almost 70 percent of the economy, rose at a 1.9 percent annual pace last quarter, compared with 2.4 percent in the final three months of last year.

Spending, while slightly better than the 1.7 percent median forecast, was a disappointment in light of the consumer-friendly fundamentals including low gasoline prices, cheap borrowing costs, increased hiring and warmer-than-usual winter weather.

“The first quarter is going to be the worst quarter for consumption for all of 2016,” said Jacob Oubina, a senior U.S. economist at RBC Capital Markets LLC in New York. “With financial markets calming down and retracing all of their losses, the fundamental factors that have driven consumption will continue to do so.”

Americans have more job security. A separate report from the Labor Department showed filings for unemployment benefits held last week around four-decade lows. Jobless claims rose to 257,000 from the prior week’s revised 248,000 that were the fewest since 1973.

The GDP report showed disposable income adjusted for inflation climbed 2.9 percent in the first quarter, an improvement from the 2.3 percent gain in final three months of 2015. The saving rate ticked up to 5.2 percent from 5 percent.

The biggest factor weighing on the economy last quarter came from companies. Nonresidential fixed investment, or spending on equipment, structures and intellectual property, dropped at a 5.9 percent annualized pace, the biggest decline since the second quarter of 2009.

Last year’s slump in oil prices that extended into early 2016 led to an 86 percent annualized plunge in capital spending on wells and shafts, the most in records back to 1958.

Investment is also languishing as corporations struggle to boost profits against a backdrop of weak overseas demand and restrained domestic purchases.

Customers in the U.S. also limited orders as companies trim stockpiles to bring them more in line with sales. Inventories subtracted 0.33 percentage point from growth after a 0.22 percentage-point drag in the three months ended in December.

Progress in trimming inventories, along with receding headwinds from abroad and a comeback in the prices of oil and other commodities, may keep investment from deteriorating further.

A dearth of eager overseas customers led to a drop in exports in the first quarter. Trade subtracted 0.34 percentage point from overall growth, the most in a year.

Stripping out unsold goods and trade, the two most volatile components of GDP, as well as government expenditures, so-called final sales to private domestic purchasers increased at a 1.2 percent rate, the weakest advance since the third quarter of 2012.

Government spending rose at a 1.2 percent pace, led by states and municipalities.

If the past two years are any guide, the economy will shake off the first-quarter softness. In 2015, GDP rose 0.6 percent before rebounding to a 3.9 percent pace in the second quarter. A year earlier, the economy shrank at a 0.9 percent rate and then advanced 4.6 percent in the April-June period.

Fed policy makers, after skipping an interest-rate hike for a third straight meeting on Wednesday, suggested they remain upbeat about the underpinnings of U.S. growth. Central bankers also said they will continue to “closely monitor” inflation.

The GDP price index rose 0.7 percent in the first quarter. A measure of inflation tied to personal spending and excluding volatile food and fuel costs climbed 2.1 percent, the most in four years and in line with policy makers’ target.