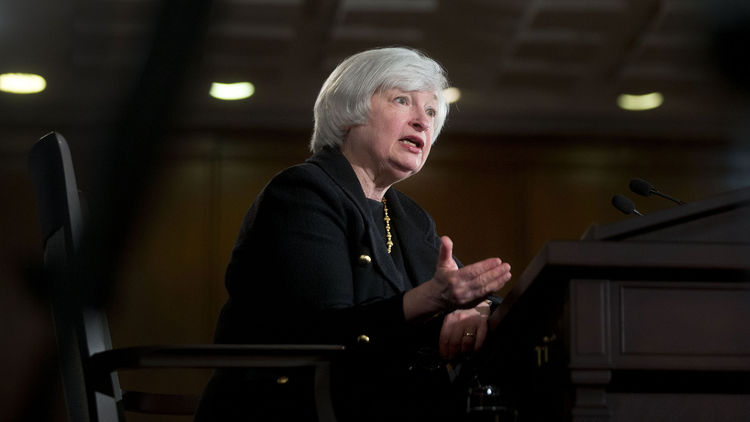 The Federal Open Market Committee omitted previous language that “global economic and financial developments continue to pose risks,” instead saying officials will “closely monitor” such developments, according to a statement released Wednesday following a two-day meeting in Washington. The Fed left its benchmark interest rate unchanged.

“Labor market conditions have improved further even as growth in economic activity appears to have slowed,” the FOMC said. “Growth in household spending has moderated, although households’ real income has risen at a solid rate and consumer sentiment remains high.”

The committee reiterated that it will probably raise rates at a “gradual” pace. The central bank’s next meeting is June 14-15.

Extending a hold since raising interest rates in December from close to zero, the committee said that inflation has continued to run below the Fed’s 2 percent target, and market-based measures of inflation compensation remain low.

Officials omitted an assessment of whether the risks to the outlook were balanced or not for the third straight meeting. After saying in December that risks were “balanced,” policy makers removed the so-called “balance of risks” in January amid financial-market turmoil.

Minutes from the March meeting showed that “many” officials saw the global situation posing downside risks to the U.S. economy.

Esther George, president of the Kansas City Fed, dissented for the second meeting in a row, repeating her preference for a quarter-point increase instead of voting to leave the federal funds rate’s target range at 0.25 percent to 0.5 percent.

Spurred largely by robust jobs growth, Yellen closed 2015 by leading the FOMC to its first rate rise in almost a decade and declaring her expectation for a “gradual” pace of additional hikes this year.

Despite continued strength in the labor market, the committee balked at another move in January and again in March amid worries that weak global growth and turbulence in financial markets might harm the U.S. economy. Markets have since calmed and inflation has showed signs of rising closer to the central bank’s 2 percent target, but growth in the U.S. has slowed.

“Since the beginning of the year, the housing sector has improved further but business fixed investment and net exports have been soft,” the FOMC said. The committee reiterated that a “a range of recent indicators, including strong job gains, points to additional strengthening of the labor market.”

GDPNow, the Atlanta Fed’s measure of economic growth, estimated first-quarter expansion at an annual rate of 0.6 percent, as of Wednesday. Growth in the last quarter of 2015 was also weak, at 1.4 percent on an annualized basis, according to the Commerce Department, which releases preliminary first-quarter figures Thursday for gross domestic product.

In quarterly forecasts submitted in March, the median projection from FOMC members was for two quarter-point interest-rate increases in 2016, down from the four projected by the median forecast in December. In contrast, prices for federal funds futures contracts before the FOMC statement implied that investors expected just one move this year, and not until September at the earliest.

Some Fed officials have worked to lift market expectations in recent weeks. Boston Fed President Eric Rosengren, an FOMC voter this year, said April 18 that raising rates at the pace predicted by markets would risk pushing unemployment too low and inflation too high. Rosengren is known for advocating a slower approach to rate hikes than most of his policy-making colleagues.