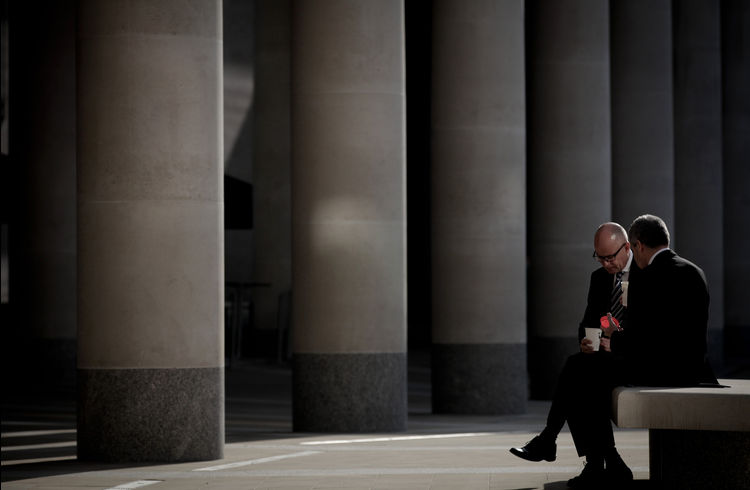 Turmoil returned to global markets as oil plunged and European stocks sank to the lowest levels in 13 months, fueling a rush into haven assets.

Earnings exacerbated the rout, sending MSCI Inc.’s gauge of global equities to the brink of a bear market. Russia’s ruble and Mexico’s peso fell to records, while bets mounted on an end to Hong Kong’s dollar peg. Yields on 10-year Treasuries dropped below 2 percent and the yen jumped to a one-year high.

“There are a lot of things behind” the selloff, said Steven Schwarzman, the chief executive officer of Blackstone Group LP, in an interview Wednesday with Bloomberg Television’s Erik Schatzker from Davos, Switzerland. “You have economic things such as the slowing of the U.S. economy which has been pretty gradual. You’ve got energy going down so quickly that you can almost get windburn. You’ve got China as an issue which is is probably overdone. So when you put those factors together you have an unattractive brew along with the concern the Federal Reserve will raise rates and slow the economy further.”

Oil’s slump to a 12-year low is ripping through markets. Just on Wednesday, Royal Dutch Shell Plc said profit may drop at least 42 percent in the fourth quarter and Saudi Arabia was said to order a halt in selling options used to bet against its currency peg. U.S. bonds now predict the slowest inflation since May 2009. A report on Thursday will probably show U.S. crude stockpiles expanded, exacerbating the global glut.

“It’s back to oil and that’s what is driving everything,” said Barra Sheridan, a rates trader at Bank of Montreal in London. “We can easily run more because it’s pure fear. I don’t know what we need to change this sentiment.”

The Stoxx Europe 600 Index tumbled 2.5 percent at 8:35 a.m. in New York, with all industry groups declining. The MSCI All-Country World Index retreated 1.2 percent, extending its drop from a May high to 18.6 percent, nearing the 20 percent threshold for a bear market. More than $15 trillion has been erased from the value of global equities in the period, according to data compiled by Bloomberg.

Standard & Poor’s 500 Index futures slid 1.6 percent. Goldman Sachs Group Inc. slipped 1.9 percent after reporting a 65 percent drop in fourth-quarter profit as an agreement to settle a U.S. probe into its handling of mortgage-backed securities reduced earnings.
The cost of living in the U.S. dropped in December, led by a slump in commodities, and New-home construction in the U.S. unexpectedly fell, government reports showed to day.

The MSCI Emerging Markets Index dropped the most in two weeks, sinking 2.8 percent to the lowest on a closing basis since May 2009. The gauge is down more than 12.6 percent this year, the worst start since records began in 1988.

Russia’s Micex Index declined 1 percent and the Bloomberg GCC 200 Index of equities in Gulf markets lost 3.6 percent. Saudi Arabia’s Tadawul All Share Index sank 5 percent and Dubai shares slid 4.6 percent. Egypt’s benchmark tumbled 5.3 percent.
Russia’s ruble weakened as much as 3.1 percent to a record 81.0490 against the dollar. The Mexican peso fell to a record 18.4775 per dollar and is down 6.4 percent this year, making it Latin America’s worst performing major currency.

Saudi Arabian banks are under orders to stop selling currency products that allow investors to make cheap bets on a devaluation of the riyal, according to five people with knowledge of the matter. The Saudi Arabian Monetary Agency told banks not to sell options contracts on riyal forwards at a meeting in Riyadh on Jan 18., the people said, asking not to be identified as the information is private.

Hong Kong’s dollar traded near its weakest level since 2007 and forwards contracts sank as China’s market turmoil fueled speculation the city’s 32-year-old currency peg will end. Contracts to buy the currency in 12 months fell as much as 0.3 percent to HK$7.8904 per dollar, beyond the HK$7.75-HK$7.85 range that it can trade within under the existing exchange-rate system. The spot rate dropped to as low as HK$7.8272, within 0.35 percent of the weak end of its band.

West Texas Intermediate crude lost as much as 4 percent to $27.32 a barrel before trading 3 percent lower. Inventories probably increased by 2.75 million barrels last week, according to a Bloomberg survey before a report from the Energy Information Administration Thursday.

Industrial metals dropped on prospects for slower economic growth in China and sustained low oil prices. Copper fell as much as 1.1 percent.

Gold rose as renewed losses in equities spurred demand for less risky assets, with Citigroup Inc. saying bullion’s rationale as a haven was now back in vogue and prices may be supported over the first quarter.

Soybeans in Chicago dropped from the highest in almost four weeks on bets that ample supply in South America will damp prices.

The Australian dollar slid 0.8 percent to 68.52 U.S. cents, extending this year’s decline to 6. percent. The kiwi touched the weakest level since Sept. 30.

The Canadian dollar, which has fallen every day this year, slipped to the lowest since 2003 amid speculation the central bank will cut its benchmark interest rate to a level last seen during the 2009 financial crisis.

The Bank of Canada decides on interest rates Wednesday, and private-sector economists are almost evenly divided on whether it will cut the policy rate to 0.25 percent.

The difference between yields on 10-year notes and similar-maturity Treasury Inflation Protected Securities, a gauge of expectations for consumer prices, shrank as much as three basis points to 1.37 percentage points, the narrowest since May 2009.