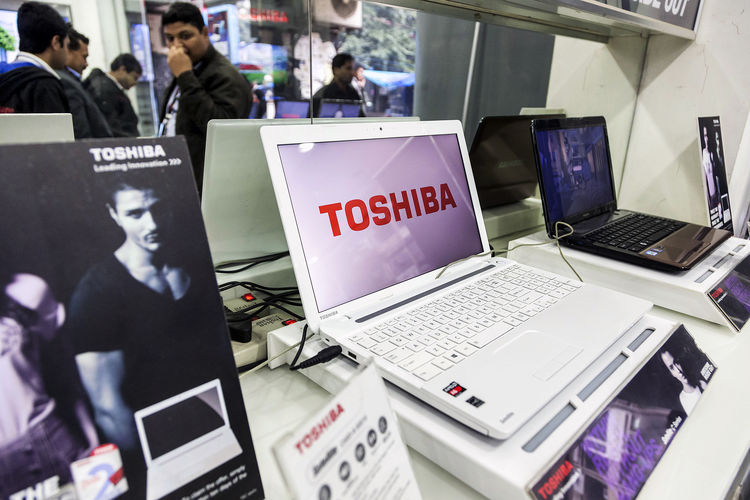 The projected net loss for this fiscal year includes 260 billion yen in taxes because of a reversal of deferred income-tax assets, it said in a statement Monday. The forecast doesn’t include possible impairment of goodwill and fixed assets at the company’s nuclear power systems business because Toshiba is still checking that, it said.

Toshiba, trying to recover from an accounting scandal in which it padded profits for almost seven years, is halting development and sales of TVs outside Japan, cutting costs at its PC and home appliances businesses and considering alliances with third parties.

President Masashi Muromachi told reporters Monday the group considers listing its chip business as one option, and may also sell a stake in its medical equipment unit. Toshiba has a 34 percent share of the global market for flash memory chips used in smartphones and mobile devices through its alliance with SanDisk Corp.

“Considering how bad things have gotten, this level of restructuring is the least they can do,” said Mitsushige Akino, Tokyo-based executive officer at Ichiyoshi Asset Management Co., which doesn’t hold Toshiba shares. “They need to do more, but it’s not as simple as cutting people and closing unprofitable businesses. The questions is what will the results be two years after the restructuring.”

Shares of the industrial conglomerate fell 9.8 percent, the most since May 11, to close at 254.8 yen in Tokyo trading before the announcement. The company has lost about $9 billion, half of its market value, over the past eight months since initially announcing an accounting probe.

The company will end consignment of design and manufacturing to outside vendors for its PC business, while concentrating on business-to-business sales and focusing the consumer portion of the segment to the Japan and U.S. markets. Product platforms will be reduced to less than one-third of the current number, the company said.