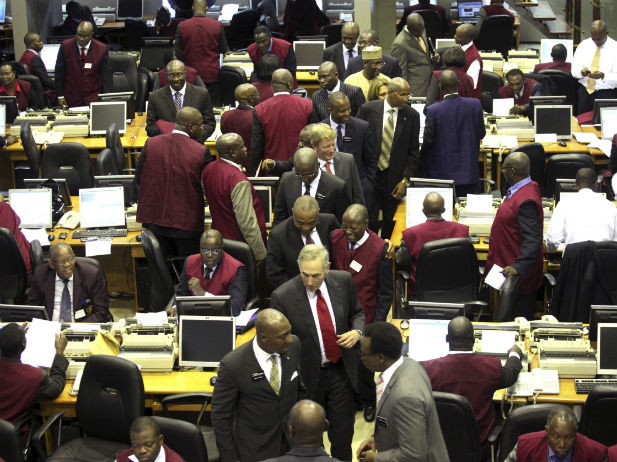 The Nigerian Stock Exchange All Share Index gained 2.96 percent at 09:31:56 a.m. local time as global crude oil price reached $48.95 to a barrel for the first time in a month. The index that has lost 11.28 percent of its value this year alone seem pose for moderate recovery as emerging markets continue to recover from last week global market dip.

However, Nigerian economy grew 2.35 percent in the second quarter according to the data released on August 25th by National Bureau of Statistics. The report shows a 1.61 percent reduction in growth when compared with preceding quarter and lower by 4.19 percent from second quarter 2014. Aggregated GDP was N22, 859,153.01 million at basic prices while second quarter of 2014 was N21, 734, 829.86 million, nominal GDP was 5.17 percent more than last year and 0.85 percent higher than first quarter, 2015.

There is no denying the fact that the current Central Bank of Nigeria Forex policy  has hampered importers’ trade and subsequently reduced the new job creation (informal sector) by 74.8 percent and 69.9 percent decline in the total new jobs created in the second quarter.

“The measure would slow economic growth and even deter foreign investors from actively investing in the economy” said Doyin Salami, one of the members of Nigeria’s Monetary Policy Committee that criticized the new policy by the apex bank.

Another member, Chibuke Uche questioned the legitimacy of the apex bank’s June decision to stop importers of 41 items from accessing official FOREX rate.

Markets across Asia-pacific continue to climb for second consecutive day

Nigeria’s Presidency has explained that a total of 15 projects, spread across the six geo-political zones of the country, are to be financed with more than $4 billion from multilateral institutions.

Malam Garba Shehu, Senior Special Assistant to the President on Media and Publicity stated on Saturday in Abuja that the loan is under the 2018-2021 medium-term (rolling) external borrowing plan.

He revealed that President Muhammadu Buhari had already requested the Senate to approve sovereign loans of $4.054billion and €710million as well as grant components of $125million for the proposed projects.

He quoted the letter by the president as saying that the sovereign loans will be sourced from the World Bank, French Development Agency (AFD), China-Exim Bank, International Fund for Agricultural Development (IFAD), Credit Suisse Group and Standard Chartered/China Export and Credit (SINOSURE).

He said: “The President’s request to the Senate listed 15 proposed pipeline projects, the objectives, the implementation period, benefiting states, as well as the implementing Ministries, Departments and Agencies (MDAs).

“A breakdown of the Addendum to the Proposed Pipeline Projects for the 2018-2021 Medium Term (rolling) External Borrowing Plan shows that the World Bank is expected to finance seven projects including the $125million grant for ‘Better Education Services for All’.’’

According to him, the Global Partnership for Education grant is expected to increase equitable access for out-of-school children and improve literacy in focus states.

He expressed the hope that the grant, which would be implemented by the Federal Ministry of Education and the Universal Basic Education Commission (UBEC), would strengthen accountability for results in basic Education in Katsina, Oyo and Adamawa States.

Other projects to be financed by the World Bank, according to Shehu, are the State Fiscal, Transparency, Accountability and Sustainability Programme for Results as well as the Agro-Processing, Productivity, Enhancement and Livelihood Improvement Support Project.

He said the benefiting states for the agro-processing project included, Kogi, Kaduna, Kano, Cross River, Enugu and Lagos with the Federal Ministry of Agriculture and Rural Development as the implementing ministry.

The presidential aide stated that the objective of the project was to enhance the agricultural productivity of small and medium-scale farmers and improve value addition along priority value chains in the participating states.

Shehu added that the World Bank would also be financing the Nigeria Sustainable Water Supply, Sanitation and Hygiene (WASH) project in Delta, Ekiti, Gombe, Kaduna, Katsina, Imo and Plateau States, for the next five years.

According to him, the project, when completed, is expected to improve rural water supply, sanitation and hygiene nationwide towards achieving Sustainable Development Goals (SDGs) for water supply and sanitation by 2030.

“Under the external borrowing plan, the World Bank-supported projects also include Nigeria’s COVID-19 Preparedness and Response Project (COPREP), under the supervision of the Federal Ministry of Health and Nigeria Centre for Disease Control (NCDC).

“The project, which has an implementation period of five years, will respond to threats posed by COVID-19 through the procurement of vaccines.

“Furthermore, no fewer than 29 states are listed as beneficiaries of the Agro-Climatic Resilience in Arid Zone Landscape project, which is expected to reduce natural resource management conflicts in dry and semi-arid ecosystems in Nigeria,’’ he said.

He gave the names of the benefiting states for the project to be co-financed by the World Bank and European Investment Bank (EIB) to include: Akwa Ibom, Borno, Oyo, Sokoto, Kano, Katsina, Edo, Plateau, Abia and Nasarawa.

He said the World Bank would also be funding the Livestock Productivity and Resilience project in no fewer than 19 states and the Federal Capital Territory (FCT) while the China EXIM Bank is expected to finance the construction of the branch line of Apapa-TinCan Island Port, under the Lagos-Ibadan Railway modernisation project.

“The digital identity project will be co-financed with World Bank and EIB.

“The Value Chain Development Programme to be financed by IFAD and implemented in Anambra, Benue, Ebonyi, Niger, Ogun, Taraba, Nasarawa, Enugu and the Kogi States will empower 100,000 farmers, including over 6,000 and 3,000 processors and traders, respectively.

“The loan facility to be provided by European ECA/KfW/IPEX/APC will be spent on the construction of the Standard Gauge Rail (SGR) linking Nigeria with Niger Republic from Kano-Katsina-Daura-Jibiya-Maradi with branch to Dutse.

“The specific project title, Kano-Maradi SGR with a branch to Dutse, has an implementation period of 30 months and will be implemented by the Federal Ministry of Transport.

“The National Agency for Science and Engineering Infrastructure (NASENI) will implement the project aimed at increasing local capacity and capability in the development of power and renewable energy technologies and infrastructure,’’ he further disclosed.

Shehu revealed that Credit Suisse would finance major industrialization projects as well as micro, small and medium enterprises schemes to be executed by the Bank of Industry.

He said the SINOSURE and Standard Chartered Bank would also provide funds for the provision of 17MW Hybrid Solar Power infrastructure for the National Assembly (NASS) complex. “The project, with an implementation period of five years, is expected to address NASS power supply deficit and reduce the higher overhead burdensome cost of running and maintaining fossil fuel generators (25MW installed capacity) to power the assembly complex,’’ he added.