The Nigerian Exchange Limited (NGX) closed in the green for a second consecutive week last week as investors have started returning to the Exchange following interest rates hike that eroded interests.

Breaking down each sector, the Financial Services Industry led the activity chart with 1.017 billion shares valued at N5.685 billion traded in 10,107 deals. Therefore, contributing 85.09% and 43.99% to the total equity turnover volume and value respectively. The

During the week, Sterling Bank Plc., Fidelity Bank Plc and Access Holdings Plc were the most traded equities. Together, the three accounted for 540.056 million shares worth N1.499 billion that exchanged hands in 2,179 deals and contributed a combined 45.18% and 11.60% to the total equity turnover volume and value, respectively.

The market value of all listed equities appreciated by N197 billion from N26.797 trillion recorded in the previous week to settle at N26.994 trillion last week.

Similarly, all other indices finished higher with the exception of NGX- Growth Index which depreciated by 0.51% while, the NGX ASeM and NGX Sovereign Bond indices closed flat.

$20 Billion Diaspora Remittance Can Boost Liquidity on The Capital Market

Trading session on the NGX on Tuesday 20th, 2022 witnessed some sell-off, especially in the blue-chip stocks. However, despite the sell-off, investors gained N2 billion in value as market capitalisation went up to N26.670 trillion.

Investors King analysis shows that the gains recorded in First Bank, Fidelity bank, Zenith Bank, Linkage Assurance, Briscoe Nigeria and six others were responsible for the marginal gain recorded on the Exchange today.

Also, Regency Alliance Insurance went up by 4.00 percent to close at 26 kobo. Mutual Benefits Assurance appreciated by 3.70 percent to settle at 28 kobo a unit.

Breaking down activity in key sectors, the Financial Services Industry led the activity chart with 411.407 million shares valued at N3.943 billion traded in 9,471 deals. Therefore, contributing 57.19% and 49.26% to the total equity turnover volume and value respectively.

Courteville Business Solutions Plc, Zenith Bank Plc and Access Holdings Plc were the three most traded equities and accounted for 278.293 million shares worth N1.984 billion that exchanged hands in 3,038 deals. The three contributed a combined 38.68% and 24.78% to the total equity turnover volume and value respectively.

Similarly, all other indices finished lower while the NGX ASeM and NGX Growth indices closed flat.

The Exchange year-to-date return to 15.82%. See details of top gainers and losers below. 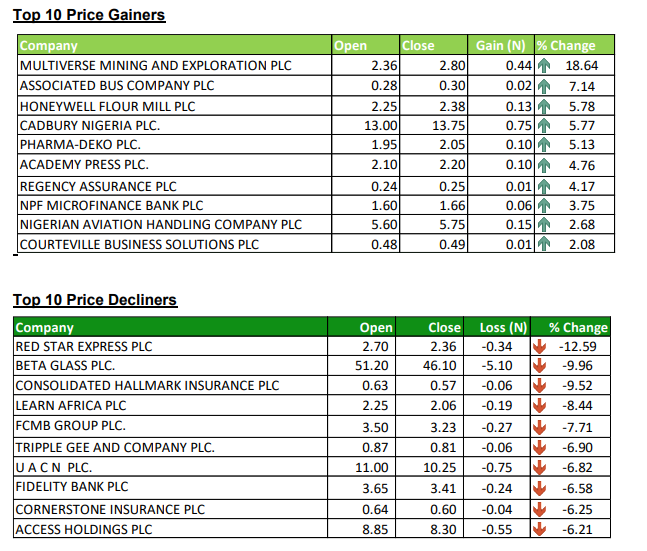 NGX Group was the most affected after its share price dropped from N21 to N20, down by N1 or 4.76percent.

These drops are a continuation of the wider equity sell-off because of the uncertainty in the market.

Reacting to this mixed development, an analyst at PAC Holdings, Wole Adeyeye, said some investors migrated from the stock market to the fixed-income market in a move to take advantage of high yields, which was triggered by the recent hike in policy rate.

He stated further that “ foreign investors avoided the Nigerian stock market due to the upcoming general elections, weak local currency and insecurity in the country.”

While this trend may likely continue for a couple of months because of the attractiveness of the fixed income market which is expected to remain relatively high and the uncertainty surrounding the economy which has created a degree of fear for investors, the long-term outlook of the equity market looks positive.