The Federal Government of Nigeria has estimated that Sub-Saharan Africa would need about $60 billion in order to have electricity, energy supply and clean processing of food between now and 2030.

Minister of State for Petroleum Resources, Timipre Sylva disclosed this at the annual Symposium and Exhibition of the Petroleum Engineers (LPE) in Lagos.

He noted that an annual investment of around $35 billion could bring electricity access to 759 million Africans who currently lack it.

He added that another $25 billion a year could help 2.6 billion people globally to access clean cooking by 2030.

“Annual investments of around $35 billion could bring electricity access for 759 million people who currently lack it, and $25 billion a year can help 2.6 billion people gain access to clean cooking between now and 2030,” he said.

The need for developing African petroleum value chains has been at the forefront of African development. Investors King had earlier reported that oil will play a significant role in the African energy mix and will take the highest share over all forms in the future mix.

However, Sylva noted that with the demand of over 600 million without access to electricity, Africa must do this in a modern way.

”We must not solve one problem while creating another. Africa needs to also take care of the environment.

“We must have a clear mandate and one voice on how we are going to meet our emissions targets. China has said that by 2060, it will achieve carbon neutrality. Europe has set its target for 2025. Africa needs to do this, as well.”

Sylva also emphasized that the required expenditure is a minor part of the larger multi-trillion-dollar global energy investment required.

Despite providing below 6% of global energy use and 2% of total global emissions, Sylva believes that the continent must transition to sustainable energy use.

Africa, Sylva believes, has the potential to take a prominent role in this regard because of its vast undiscovered fossil energy deposits, which may offer more even foreign direct investment and export money.

However, the minister emphasized that Nigeria possesses the most extensive natural resources in Africa, with around 208.62 trillion cubic feet (TCF) of known gas valued at over $803.9 trillion and a potential upside of 600TCF of gas.

Sylva described the Petroleum Industry Act (PIA) as a game-changer that will assist Africa in eradicating energy crises.

“The PIA has generous incentives to enable development, distribution, penetration, and utilization of gas even as it incentivizes entry into the midstream, especially for pipelines with an additional five-year tax holiday for investment in gas pipelines.

“The PIA is a supply-side enabler, capable of provoking and triggering commercial interests and investments in gas utilization as well as treating gas as a stand-alone commodity.

“As a nation, we are following a transition pathway that combines technology, investment, business strategies, and government policy that will enable Nigeria to transition from its current energy system to a low-carbon energy system with natural gas playing a pivotal role over the next generation, roughly between now and 2060,” he added.

The minister insisted that there must be multiple pathways to the energy transition in order to ensure that no country is left behind in the process of achieving net zero by 2060.

“As a continent, we need to be intentional and recognize the need to develop hydrocarbon resources in environmentally and socially responsible ways.

“And as alluded to by the African Union, we need to be realistic in choosing the energy transition pathways which address our unique requirements and circumstances,” Sylva said.

Mele Kyari, the Chief Executive Officer, NNPC, was quoted as saying at the Nigeria-Portugal Business and Trade Forum attended by President Muhammadu Buhari.

The NNPC boss said Portugal has been purchasing Nigeria’s energy for decades now and explained that President Buhari is on a state visit to Portugal for the second United Nations Ocean Conference.

He said “President Muhammadu Buhari is on a state visit to Portugal for the second United Nations Ocean Conference.

“On the sidelines of the event, President Muhammadu Buhari is leading a high-level Nigerian business delegation to the Nigeria-Portugal Business & Trade Forum.

“On the President’s delegation is the CEO NNPC Ltd, Mallam Mele Kyari, who highlighted the age-long energy partnership between the two countries, stressing that Nigeria supplies 70 per cent of energy imports to the European nation.”

On its Twitter page, the NNPC further quoted Kyari as saying, “This year alone, we have sold over a billion-dollar worth of natural gas to Portugal.”

NNPC boss also noted that there were ample opportunities to grow the energy supply to Portugal.

He told participants at the forum that Nigeria had invested in critical infrastructure to ensure domestic gas availability and increase gas supply to the international market. 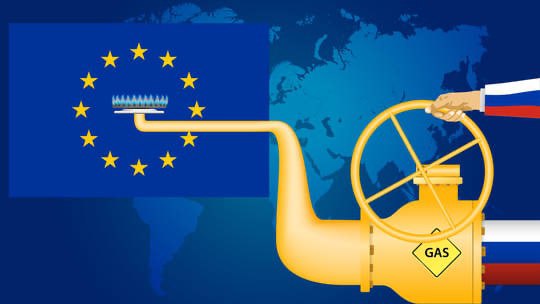 Russia’s state-owned gas supplier, PJSC Gazprom has said it would halt gas supply to Denmark’s Orsted and Shell for its contract to supply gas to Germany after both parties refused to make payments in roubles – the Russian currency.

The move by Gazprom comes after European Union leaders said they will block most Russian oil imports by the end of 2022 to punish Moscow for invading Ukraine. The gas company said it would continue to phase out Russian fossil fuels.

The EU ban will affect oil that arrives by sea – around two-thirds of imports – but not pipeline oil after Hungary opposed the decision.

In response to Western sanctions, Russia has already cut off gas supplies to Poland, Bulgaria, and the Netherlands, after the countries refused to comply with Russian demands to switch to payment in roubles.

The latest move expands that retaliation to Germany and Denmark.

President of the Russian Federation, Vladimir Putin’s decree has been seen as an attempt to boost the Russian currency, which has been hit by sanctions, as more foreign exchange demand for roubles is likely to increase demand and push up its value.

Shell Plc has now said it will work to keep gas flowing to its customers in Europe despite the decision by the Russian gas company and has also promised that it would continue to get gas from its other sources, as reported by a UK media outfit.

“It had not agreed to “new payment terms set out by Gazprom”, which included the creation of Russian bank accounts,” Shell stated in an interview with newsmen.

“We will work to continue supplying our customers in Europe through our diverse portfolio of gas supply,” according to its spokesman.

“Shell continues to work on a phased withdrawal from Russian hydrocarbons, in compliance with applicable laws and regulations.”

Shell has taken a hit of $5bn (£3.8bn) from offloading its Russian assets as part of its plans to withdraw sever ties with the country. It also confirmed it had quit its joint ventures with Gazprom.

The firm pledged in April to no longer buy oil from Russia but said contracts signed before the invasion of Ukraine would be fulfilled.

Recall also that Investors King reported that the EU’s decision to ban the Russian oil led to an increase in the price of crude oil from which Nigeria is expected to benefit from.

Crude oil prices rose above $120 a barrel on Monday as traders awaited the decision of the EU concerning Russian crude oil sanctions.