In terms of the volume traded, the financial services industry led the activity chart with 1.770 billion shares valued at N18.058 billion and exchanged in 12,942 deals. Therefore, the sector contributed 81.20 percent and 82.22 percent to the total equity turnover volume and value, respectively.

FBN Holdings Plc, Universal Insurance Plc and Fidelity Bank Plc were the three most traded stocks and together accounted for 1.161 billion shares worth N12.338 billion that were traded in 3,460 transactions. The three contributed 53.28 percent and 56.18 percent to the total equity turnover volume and value, respectively.

The market value of all listed equities rose by N340 billion or 1.62 percent from N20.956 trillion it closed in the previous week to N21.296 trillion last week.

University Press Plc led gainers with 28.46 percent or N0.35 during the week to close at N1.58 percent per share. This was followed by the 21.74 percent or 1.75 percent recorded in FBN Holdings Plc in the same week. See the details below. 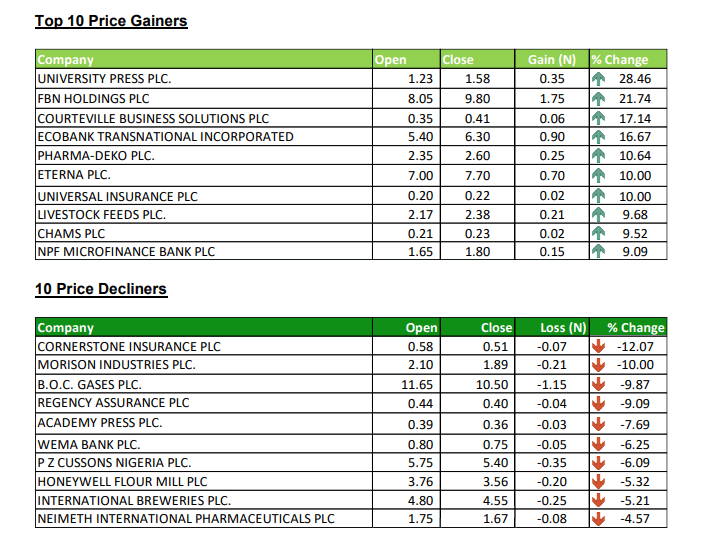 Investors at the Nigerian Exchange Limited (NGX) gained another N238 billion on Thursday following a profit of N53 billion on Wednesday.

Market value of all listed equities closed at N21.764 trillion, an increase of N238 billion when compared to N21.526 trillion it closed on Wednesday.

The Nigerian Exchange Group (NGXGROUP) extended its bullish run on Wednesday to top gainers for the third consecutive day since it was listed on Friday.

NGXGROUP opened the day at N19.50 a share before setting a new record-high at N23.55 per unit and gradually paring gain to N21.45.

The Nigerian Exchange Limited All-Share Index gained 0.26 percent to close at 41,249.71 index points, while the market value of all listed equities expanded by N53 billion to N21.526 trillion, up from N21.473 trillion it closed on Monday.

Price of Shares of Nigerian Exchange Group Near N20 a Unit

The recently listed Nigerian Exchange Group (NGXGROUP) extended gains to N19.5 per share as more investors keyed into the prospect of the newly created company following the demutualisation of the Nigerian Stock Exchange to reposition the organisation for better growth and opportunities.

The price of the stock continues to rise on Monday, hitting N19.5 per as more investors jumped on it. Investors traded 19,000,933 units on Monday.

“The most significant benefit of our listing on the NGX exchange is the ability it gives us to drive inorganic growth as we add new subsidiaries and business lines that complement our business. This new era is indeed very exciting for us and we look forward to many possibilities achievable from deepening our various partnerships,” stated Mr. Oscar Onyema, the Chief Executive of NGX Group.