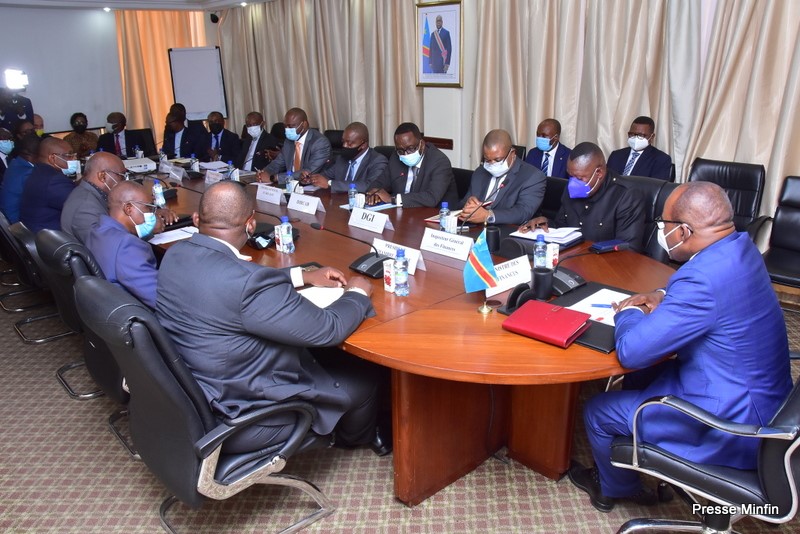 The Minister of Finance, Nicolas Kazadi, urges the operators of the mining sector to work for the development of the DRC. It is the first time that the Finance Minister has exchanged with some of the primary contributors of revenue to the national treasury.

During this meeting, Nicolas Kazadi announced the creation of an investment fund for the diversification of the Congolese economy. This initiative is being developed to contribute to mechanisms of stabilization for the economy and especially open the process of perennial development, an essential goal for His Excellency President Félix Antoine Tshisekedi Tshilombo.

According to the Minister of Finance, the mining sector remains a vital component of the Congolese economy. The mining code was designed to attract foreign investors and the rapid rise of this sector has allowed the state to maximize revenues despite the structural problems that remain.

The Inspector-General of Finance, Mr. Jules Alingete, was equally present in this session. He urged the mining operators to comply with legal provisions, such as the payment of VAT, and the repatriation of export revenues which the Finance Minister requested during the meeting. Jules Alingete also insisted on the importance of restoring order so as to increase public revenues and special attention was brought to the more rational use of mining resources in order to stimulate the development of local communities.

In addition to the legal and fiscal debate for effective management of the mines for future generations, a proposal was brought forward to strengthen this dialogue by holding regular meetings under the leadership of the Ministry of Finance to examine the different issues thoroughly. This proposal made by Louis Watum, the President of the Chamber of Mines, was immediately adopted to mend the atmosphere of mistrust that was previously apparent between the Congolese government and operators in the mining sector.

Another subject of lively debate is customs disputes. For some mining operators, this issue is simply a matter of optical illusion, with customs officials often presenting unfounded figures to the Congolese State. To ease the tension, the Minister of Finance, Nicolas Kazadi, reminded his audience of the necessity of forming an arbitration commission, as stated in the customs code, to clear up any misunderstandings.

Though it possesses several deposits of various minerals (including copper, cobalt, gold, and diamonds), the DRC only exploits a dozen of these deposits. This is why the Minister of Finance, Nicolas Kazadi, is working on setting up a hotline to regularly record the opinions of all parties on the various solutions to tackle the challenges faced by the mining sector.