Investors in the Nigerian Exchange Limited gained N292 billion in the week ended July 2, 2021 as stock traders positioned for the first half of the year’s reports.

In terms of the volume traded, the financial services industry led the activity chart with 646.404 million shares estimated at N5.199 billion traded in 8,996 deals, therefore, the sector contributed 64.26 percent and 50.33 percent to the total equity turnover volume and value, respectively.

The top three most traded equities were Zenith Bank Plc, Transcorp Hotels Plc and Access Bank Plc. The three accounted for 207.341 million shares worth N2.510 billion in 2,774 deals and contributed 20.61 percent and 24.30 percent to the total equity turnover volume and value, respectively.

The year-to-date decline of the index improved to -5.11 percent but 0.80 percent growth in the month of July or the third quarter so far.

Ikeja Hotel led gainers with a 60 percent increase in share price from N1 to N1.60 as shown below.  The Linkage Assurance Plc followed with 30.77 percent from N0.65 to N0.85. See the details below. 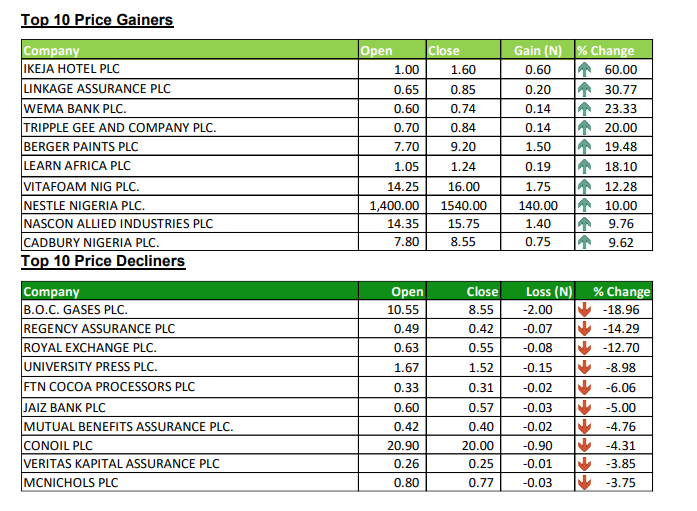