The Central Bank of Nigeria (CBN) has devalued the Nigerian Naira once again despite efforts to caution the apex bank on intermittent devaluation of the local currency given the current economic reality.

The CBN had removed the Naira-USD official exchange rate of N379 from its website a week ago in a move that suggested the central bank was looking to devalue the embattled Nigerian currency again after three devaluations in the last 18 months.

On Tuesday, the apex bank adopts NAFEX (Investors and Exporters’ Forex Rate) as the official exchange rate of the nation, putting the Naira-US Dollar exchange rate at N410.25 as of Wednesday 9:27 am. A devaluation of N31.25. 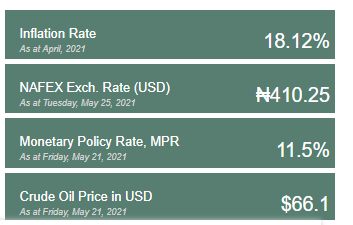 The Nigerian Autonomous Foreign Exchange (NAFEX) is the FMDQ reference rate for foreign exchange (“FX”) activities in the Investors’ & Exporters’ FX Window and is designed to represent Spot FX market rates in the Window. NAFEX rates are generated independently and objectively and published every business day at 12 noon or at a time advised by FMDQ.

The rates are calculated using a trimmed arithmetic mean of submissions from ten (10) contributing banks.

“Upon receipt of quotes, the individual contributing banks’ submission is ranked in descending order. The lowest and highest two (2) quotes are eliminated from the ranked rates leaving only the middle six (6) rates. The arithmetic mean of the remaining rates are then calculated to two (2) decimal places and disseminated as the NAFEX Spot Rate,” FDMQ stated.

The NAFEX was introduced by the Central Bank of Nigerian in 2017 to address the forex crisis that trailed the nation’s economic recession at the time.

While the NAFEX is an autonomous fx window, the CBN intervenes from time to time to manage rates in line with the economic reality of the nation. Suggesting that the Naira is not entirely free-floated even with the plunging foreign revenue and dwindling foreign reserves.

This means Naira official exchange rates will be determined daily by the activities of investors and exporters that operate on the FMDQ NAFEX window.

Godwin Emefiele, the Governor of the Central Bank of Nigeria, who spoke with journalists after the two-day monetary policy meeting held in Abuja on Tuesday, said “We are still running a managed-float [system]. We are monitoring the market and seeing what is happening for us to ensure that the right things are happening for the good of the Nigerian economy.”

Naira Depreciates to N420.25/$1 on Wednesday After Devaluation