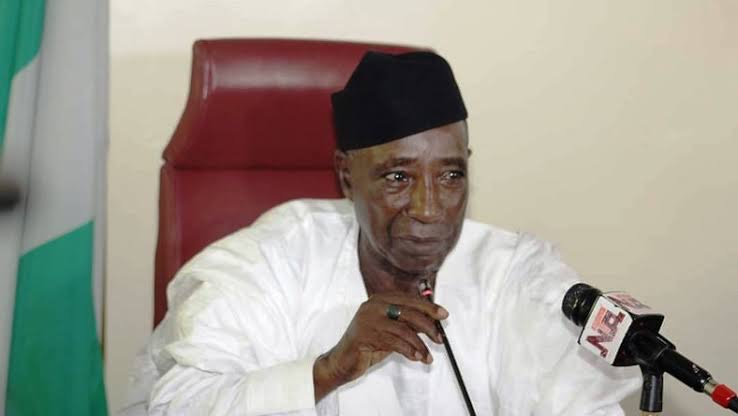 The Federal Ministry of Agriculture and Rural Development has come under fire on social media following a leaked memo conveying the approval of N30m for the construction of a ‘Friday’ mosque with taxpayers’ funds.

The memo, dated December 10, 2020, with reference number FMA/PROC/AHS/SIP/2020/7742/1, stated that the Ministerial Tenders Board approved the contract.

The ministry is led by Kano-born Minister, Alhaji Mohammed Nanono, who was appointed by the President, Major General Muhammadu Buhari (retd.), in 2019.

The document titled, ‘Award of Contract for the Construction of Friday Mosque’ was signed by the Deputy Director, Procurement, Musa Musa on behalf of the minister and was addressed to the Managing Director, El-Shukhur Multi-Buz Nig. Ltd.

It read in part, “I am directed to inform you that the ministerial tenders board at its 7th meeting held on December 7, 2020, approved the award of contract for the construction of Friday mosque to your company at the total sum of N30m only, inclusive of VAT, with a completion period of eight weeks with effect from the date of this letter.

“You are therefore required to indicate in writing within three days of receipt of this offer, your acceptance to the office of the director, procurement, FMARD, Abuja or otherwise, the offer will be considered lapsed.”

The Federal Ministry of Agriculture and Rural Development declined to make any official comment on the development.

Officials of the ministry demanded that a letter be written to the FMARD’s permanent secretary about the matter which was already trending.

The spokesperson of the ministry, Theodore Ogaziechi, told one of our correspondents that he would not comment on the matter as he had yet to be briefed about it when contacted.

However, it was observed that many employees at the ministry’s headquarters had seen the trending memo, although senior officials refused to endorse or deny its authenticity.

Meanwhile, a search through the 2020 budget showed that no mosque construction was stated in the ministry’s estimates.

A former lawmaker, Senator Dino Melaye tweeted, “What! Despite all the challenges facing food security, building a mosque is the Federal Ministry of Agriculture’s priority! To pray for rain or what? How did we get here for Heaven’s sake? What has the government got to do with churches or mosques?”

Nicholas Oduaran tweeted, “So this is part of the projects the loans the Federal Government is collecting will be used for?”

Obua Uchenna tweeted, “So hilarious and pathetic that the ministry of agric is building a mosque, the mumu wey de this country is mind-blowing and it is getting worse.”

See the memo below: 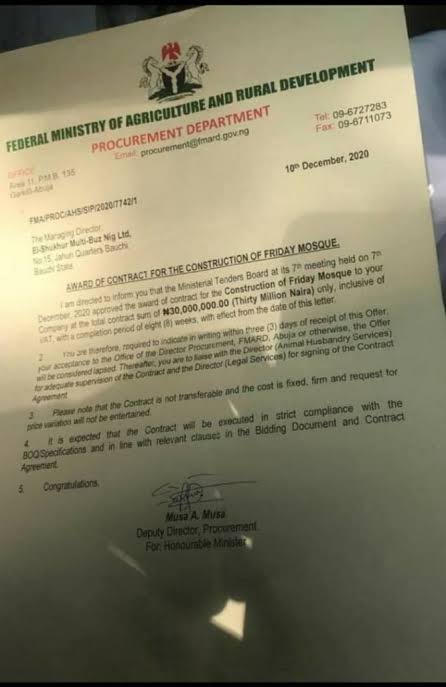 Gov Abiodun Suspends Aide Arrested In US over Alleged Fraud

Residents of Lagos state have raised alarm over the rising case of POS fraud in the state as criminals continue to illegally access their funds.

Residents of Lagos state have raised alarm over the rising case of Point of Sale (PoS) fraud in the state as criminals continue to illegally access their funds.

The rampaging rate of PoS fraud across the state has raised concerns and doubts about the reliability of the PoS system of payment as few affected Lagosians narrated their ordeal using the system.

A victim of PoS fraud in Lagos state Omotayo wept when her bank account was exploited by fraudsters who emptied her account.

Narrating her ordeal, she said: “I had used my ATM card many times during the week of that incident. I couldn’t identify the particular point where the scam happened.

“I visited a PoS point to withdraw N5,000 and after the withdrawal, I kept my ATM card in the usual spot that is known only to me. When I received debit alerts from my bank, I felt it was a mistake but when I checked my account, N10,000 had been deducted from my balance of N111,000.

“This time, with tears running down my cheeks, I hurried to a nearby POS point to withdraw the remaining N11,000 before I would withdraw, I received another debit alert of N10,000, leaving my account balance at N1,000. I wept. I cursed the scammers but then I had lost N110,000 to PoS fraudsters.”

Following the incessant case of PoS fraud in the state, the Lagos State Government (LASG) has declared its move to partner strategically with Mobile Money and Bank Agents in a bid to protect Lagosians from the rising incidence of fraud perpetrated through Point of Sale (PoS).