The Ethereum network continues to grow globally, but it appears to be more concentrated in selected regions. Data analyzed by Finbold indicates that the United States and Germany control 58.08% of all 6,806 Ethereum nodes globally as of March 9, 2021.

In the Ethereum ecosystem, a node refers to a part of software known as the client that connects to other nodes, thus participating in forming the network. A node stores the blockchain and verifies all transactions in each block, keeping the network secure while enhancing data accuracy. The nodes are divided into light, full, and archive.

The dominance of Ethereum nodes in the U.S. and Germany shows prevalence in the developed countries. The node density goes hand in hand with connectivity, industrialization, and wealth in these regions. This might be backed by the fact that running a full Ethereum node is resource-intensive, and the two countries offer the perfect environment.

Interestingly, countries that are not yet economically advanced have not featured on the top list despite controlling a notable share of crypto usage. Furthermore, countries with more Ethereum nodes are also characterized by more advanced cryptocurrency infrastructure, making it easy to establish the nodes. The countries have invested more in blockchain technology and putting it to a practical test.

The question of Ethereum centralization

The distribution of Ethereum nodes is commendable since it drives the idea of decentralization. However, there have been concerns regarding the hosting of the nodes.

Surveys show that almost a quarter of Ethereum nodes ran on Amazon Web Services at some point. This, therefore, indicates that the management of Amazon holds the potential of deciding the fate of Ethereum nodes which beats the logic of decentralization.

The distribution of nodes comes in the wake of the Ethereum 2.0 launch, which brings more scalability, increased speed, and efficiency onto the Ethereum network. The launch ushers in the Proof-of-Stake (PoS) consensus mechanism while moving away from the Proof-of-Work (PoW) model.

The upgrade also eliminates the environmentally wasteful Ethereum mining required to make the blockchain function. With Ethereum 2.0,  there is a perfect opportunity for more nodes to emerge in the future.

Ethereum, the world’s second most capitalised cryptocurrency, rose by 2.01 percent in the last 24 hours to extend its 2021 returns to 169.76 percent. 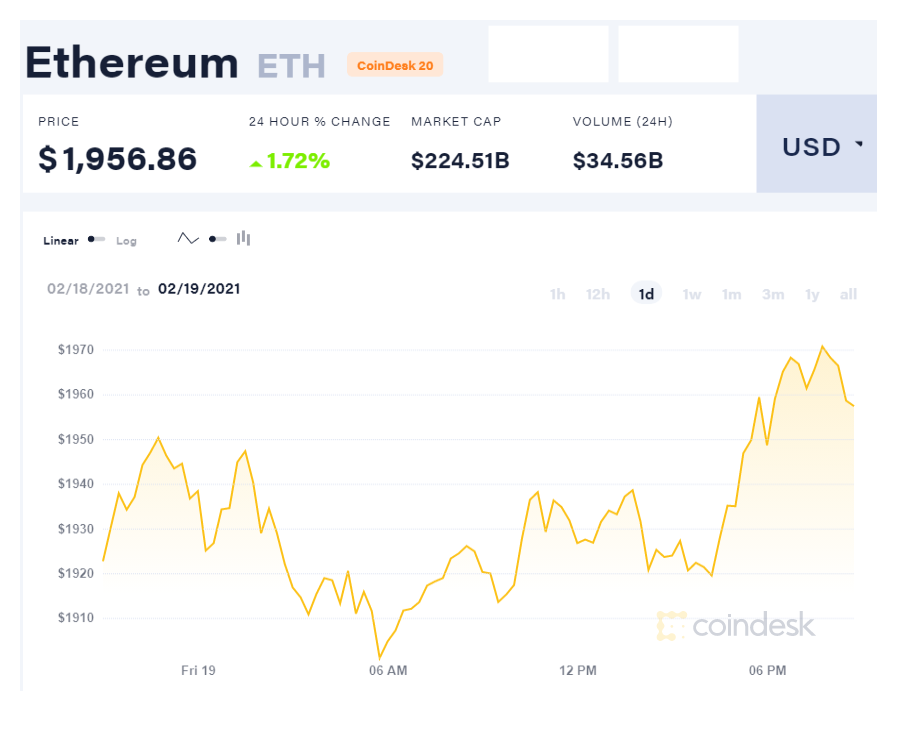 Investors traded Ethereum valued at $11.09 billion in 1.30 million transaction count at an average transaction fee of $21.44 in the last 24 hours.

The world’s second most valued cryptocurrency has enjoyed a huge surge in capital inflow since Bitcoin took off in the final quarter of last year.

Ethereum was trading at $390.87 per coin as of August 2020 when Investors King predicted its long-term bullish run for the coin.

Read Why I am Bullish on Ethereum Despite Global Uncertainty

Institutional investors are behind Ethereum’s rising value, according to various cryptocurrency reports.

“Since Grayscale Ethereum Trust (ETHE) just bought over 197,890 ETH worth $344 million on behalf of its investors in a span of two weeks, we are witnessing an influx of investments in ether only a few months after bitcoin’s institutional influx,” F2Pool’s Mao told CoinDesk.

Also, the surged in demand for Defi, Decentralised Finance, powered with the Ethereum blockchain is aiding Ethereum bullish run. Presently, the total value locked in Defi stood at $41.8 billion. Twice of its January value.

“Ether approaching $2,000 could be seen as validation of all the dapps and use cases that have blossomed over the years – from DeFi to NFTs,” OKCoin’s Lau said, referring to nonfungible tokens. “It is also benefiting strongly from bitcoin’s increased adoption. The ratio of ether to bitcoin remains at 2%-4%, a range that has persisted since September 2018.”

Ethereum, the world’s second most capitalised digital coin, gained 31.74 percent in the last 24 hours to hit $1,056.10 per coin in the early hours of Monday.

The digital coin total market value rose to $120.51 billion while investors’ volume of trade in the last 24 hours stood at an astonishing $55.88 billion.

Also read Why I am Bullish on Ethereum Despite Global Uncertainty

Total Bitcoins in circulation rose to 18.59 million, out of the total 21 million expected to be mined.

Institutional investors continued to dump money on Bitcoin for the fear of missing out despite no clear explanation or logic for the recent upsurge in the coin value.

Why I am Bullish on Ethereum Despite Global Uncertainty

Why I will be Investing in Ethereum on a Long-Term

Ethereum, the world’s second most capitalised cryptocurrency, broke through the $362.73 resistance level on Monday August 3, 2020 for the first time since July 22, 2018.

While Bitcoin attractiveness has surged on the back of the recent bullish run, a strategical look into Ethereum and the entire crypto market painted a unique picture of the world’s second most capitalised cryptocurrency.

The digital coin has gained over 35 percent since July 24, 2020. However, its recent bullish run started on May 12, 2020, a day after the third Bitcoin Halving happened. Suggesting that investors that understand market parameters have started buying Ethereum even before the present cryptocurrency bullish run.

This is because as Bitcoin becomes more expensive and out of reach of retail investors, they would naturally jump on the next affordable digital coin, which is Ethereum.

Therefore, I expect the price of Ethereum to grow further, especially if the $362.73 support level continues to hold. Again, in the near-term, I will expect the digital coin to hit a $545.72 resistance level and expect a sustained break of that level to open up a $748.44 resistance level.

Here is Why I am Bullish on Ethereum

Ethereum blockchain technology is multi-purpose compared to Bitcoin that is basically ‘digital money/asset to store value’. Ethereum can be used to power other programs like the smart contract and automate agreement or payment of agreement across key sectors using Ether, Ethereum payment unit. Meaning, there is room for Ethereum to grow going forward while Bitcoin will continue to struggle with acceptance against fiat currencies.

Ethereum is generally affordable. This, I believe would boost its attractiveness as Bitcoin becomes more expensive and out of reach of most retail investors that propelled Bitcoin to the current level.

These people have granted several interviews and attended events. Therefore, they can be held accountable for whatever goes wrong with the Ethereum technology going forward.

If Bitcoin crashed today, the team behind it will stay anonymous forever.

Bitcoin has been used to siphon billions of dollars across the cyberspace than any known cryptocurrency. It has gotten to a point where Bitcoin is gradually becoming a funnel for cybercriminals despite its seemingly value.

While Ethereum has had its fair share of scams and fraud, it is nothing compared to Bitcoin. Hence, Bitcoin will continue to struggle with perception going forward. Therefore, it is a good idea it was capped at 21,000,000.

Update: Five months after the above analysis, Ethereum hits over $1,000 per coin.