Several Nigerian youths have started completing the Access Bank account closing form following the decision of the bank to restrict bank accounts of #EndSARS protesters without a court order.

In a series of tweets, the protesters accused the lender of abusing its power by implementing the Central Bank of Nigeria’s directive to freeze bank accounts of #EndSARS leaders without a court order.

According to them, they can no longer trust the bank with their vital details, especially with the Federal Government seizing passport and arresting protesters across the nation.

One of the youths, Oloye @oloye_ on Twitter, said they were not forcing people to close their bank accounts with the lender but they were certain that if the government decides to perform a raid on dissenting voices, Access Bank would not hesitate to give up their details.

“A bank that doesn’t respect the rule of law“, he said.

Nobody is forcing you to close your accounts with Access Bank o. But let me assure you that if the government ever decides to perform a raid on those who have spoken up against it, Access Bank will willingly give up your home address.

A bank that doesn't respect the rule of law.

Another person, Peter Ogunsona @pitharoy, said “It is very sad that a bank can liaise with GOVERNMENT — and instantly closed accounts of peaceful #EndSARS protesters without court order.

“It is obvious that ACCESS BANK can disclose our private information (home address, phones numbers) if the need arise.”

This was after the lender released a statement stating it acted in line with banking regulation.

In the statement titled “We are for you, always”, Access Bank said “we want to express our sympathy for the inconvenience that eight (*) of our customers are going through due to the restrictions on their accounts as mandated by a Federal court order. We are eager for this to be resolved as soon as possible.”

However, the Nigerian youths refuted the bank’s reason and insisted that it did without a court order as it took the Central Bank of Nigeria almost two weeks after the restrictions to secure a valid court order.

Some claimed Stanbic IBTC, one of the leading lenders in Nigeria, resisted the central bank’s directive without a valid court order. A position applauded by the youths.

Stanbic IBTC bank received the same order from CBN but they resisted when the CBN did not bring a valid court order. They know it was an infringement on people's right.
I'm sorry but Access bank is culpable https://t.co/C7Ql052E89 pic.twitter.com/cycl2G0W7t

Others said Access Bank is working with the Federal Government to clampdown on dissent voices. A user, Salman, explained that since it is compulsory for a serving youth corps member to open an Access Bank account during the one year mandatory National Youth Service Corps (NYSC), people should know they are working with the federal government.

Since its Compulsory for you to open Access Bank account in NYSC for your allawee, you should know they are working with the govt, so you shouldn’t expect them on the side of the people 😏😏 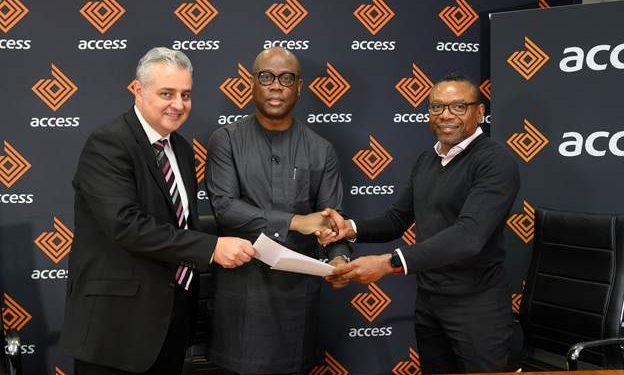 The bank described the development as another step in engraving Access Bank Plc into the continent’s history.

Noting the enthusiasm of all parties leading up to this day, Access Bank CEO, Herbert Wigwe said the SADC region represents the strongest economy on the African continent.

“This means Access Bank SA is firmly seated in one of the principal geographical areas apart from Nigeria, in terms of the size of the economy, and unlocks the gateway to the entire Southern African region,” he was quoted to have said in a statement.

Wigwe highlighted Access Bank’s solid presence in Zambia too, saying the opening of the South African subsidiary cements the Bank’s commitment to sub-Saharan Africa as a portal for exceptional banking opportunities across the continent.

Building on the organisation’s vision of delivering a robust banking operation that connects key African markets, the CEO of Access Bank SA, Bennie van Rooy, described the development as, “an exciting event for the South African banking industry,” as well as the provision of sustainable support to existing customers while appealing to new clients with a business presence across Africa.

“As part of the robust Access Bank family, the South African operations look forward to contributing meaningfully to the achievements and ambitions of the Group. In offering a full suite of financial service products to a market we understand in-depth, Access Bank SA is delighted to grow the family footprint,” he added.

Continuing, Wigwe said the Group would continue to focus on building relationships, as a partner in both businesses and in communities it serves.

“It’s vital that our banking solutions give clients the advantage they need to grow sustainably, with access to smart solutions that help them reach greater goals,” he added.

With its transactional account and online banking, commercial and asset finance, offshore investments and Forex requirements or deposit solutions, Access Bank puts the power of choice in clients’ hands.

“Partnerships with all our clients mean power for them to achieve their aspirations, while Access Bank’s growth brings greater advantages in the financial sector. Like Bennie, I am excited to be on this path with the knowledge and experience of the continent that we share,” said Wigwe.

“We look forward to the opportunities that present themselves with opening doors for individuals and businesses, and growing possibilities as we go.”

Stanbic IBTC Bank, a member of Standard Bank Group, has upgraded its USSD platform with innovative features and capabilities to improve customer experience.

Some of the new features on the upgraded platform include the bill payment gateway for billers such as the DISCO companies, which will enable customers to pay their electricity bills without stress; auto-airtime top-up, which allows customers to set up a mandate for airtime top-up whenever their balance drops below a set benchmark; as well as direct data top-up.

Speaking on the rationale behind the USSD platform upgrade, Remy Osuagwu, Executive Director, Personal and Business Banking, Stanbic IBTC Bank, said, “We are dedicated to meeting the banking needs of our customers. Improving customers’ experiences at every touchpoint with the brand is critical. We are optimistic that the new features added to our USSD platform will indeed give our customers a bigger and better banking experience.”

To onboard, customers should dial *909*11*1# to register and enter the last four (4) digits of their debit cards to create an authentication PIN that will be used to approve transactions anytime and anywhere. Existing users on the platform have access to the upgraded functionalities by just dialing *909# and following the prompt.

Remy Osuagwu assured the Bank’s esteemed customers of the organisation’s commitment to continually develop digital banking solutions to meet their needs as they evolve.

The International Islamic Trade Finance Corporation (ITFC), a member of the Islamic Development Bank (IDB) Group, has signed a new 5-Year Framework Agreement in favour of the Government of The Gambia that target to provide up to US$ 50 million to the country on an annual basis.

The agreement, signed with H.E. Mambury Njie, Minister of Finance and Economic Affairs (IsDB Governor), is a part of the Corporation’s ongoing efforts to combat the economic repercussions from COVID-19 and strengthen key economic sectors in member countries.

This US$250 million Framework Agreement will provide pre-export financing for major cash crops such as groundnuts and cashew nuts, the main agricultural produce in a sector that is a major employer of the country’s workforce. In addition, this agreement will also facilitate the import of essential agriculture inputs such as fertilizer.

In the energy sector, the financing will enable imports of key commodities such as refined petroleum, which is crucial to generate electricity in the country. Other sectors that will benefit from the five-year framework agreement include the healthcare sector through the import of medicines and health equipment, and the private sector through financing facilities to local banks and financial institutions aimed at boosting local SMEs.

Technical assistance for trade development aimed at building capacity and promoting information exchange and knowledge dissemination are other areas covered in the agreement.

H.E. Mambury Njie, The Gambia’s Minister of Finance and Economic Affairs thanked ITFC on behalf of the Government for its continued support, highlighting that this framework agreement would support national development goals to drive economic diversification and job creation across key growth sectors, whist facilitating trade and investment flows within the country, as well as globally through the country’s participation in agriculture value chains.

Reiterating ITFC’s commitment to supporting its member countries, Eng. Hani Salem Sonbol, ITFC CEO, said: “The five-year framework agreement will make way for further cooperation with the Government of The Gambia across key economic sectors whilst fostering greater collaboration with the country’s budding private sector to drive SME growth. In addition to crucial import-export financing, the agreement also has provisions to help develop the country into a stronger trading nation through enhanced capacity development and knowledge transfer programs.”

Since inception in 2008, ITFC has approved a total of US$607 million in favor of The Gambia. From energy to employment through agriculture, it reaffirms ITFC’s proven strategy of investing in key sectors of its member countries and thus contributing towards the development of the priority industries.