The Central Bank of Nigeria has continued to enforce its 27.5 percent Cash Reserve Ratio (CRR) across all banks.

According to a Nairametrics report, the apex bank debited a total sum of N459.7 billion from 26 banks, including merchant banks, on Thursday for failing to meet the CRR target. 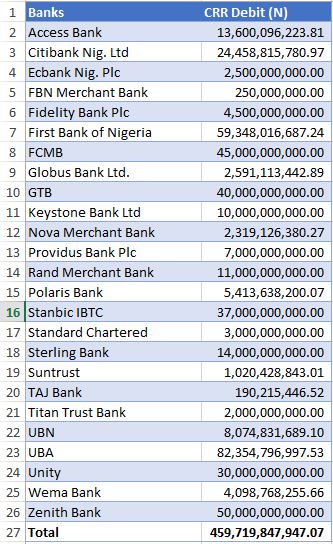 The central bank-led monetary policy committee had left the CRR unchanged in the last monetary policy meeting held in May to mop up cash in circulation and better manage the rising inflation rate.

In order to ensure banks maintained a 27.5 percent cash reserve ratio, apex bank then imposed fine to check the activities of the bank. A move most bankers attributed to falling foreign reserves and the central bank’s method of reducing banks’ forex demand.

An anonymous banker, who preferred not to be mentioned, said “You know the central bank also does what we call retail FX intervention, that is when they sell FX to corporates. Now, because they don’t want banks coming with huge demands, what they do is that a day before the FX sales, they debit the banks so that the naira you have available is small and you cannot put them under pressure because of your FX demands. That has really been the driver.”

This was coming barely a month after the apex bank debited N1.4 trillion from the nation’s banks in April. According to the banker, between April and June, CBN has carried out minor CRR debits before Thursday’s debit.

“We understand that the central bank had set up a special CRR team that is supposed to monitor banks’ CRR once a month. But now, the team monitors banks’ CRR on a weekly basis. This is why the central bank is effectively debiting banks on a weekly basis. Some weeks ago, they debited some banks about N1.4 trillion. That was one of many. Between that time and now, there have been more debits that have happened. But the debits that are huge/significant are what is troubling the banks. There was a N300 billion that happened about two weeks ago. and then yesterday that was this N459.7 billion that was also debited.

“These are huge amounts that are leaving the banking sector. It’s a squeeze on the banks. A bank like First Bank, for instance, has about N1.4 trillion in CRR with the Central Bank. And there is Zenith Bank with equally as much as N1.5 trillion. These are monies that banks can potentially put in loans at 52% at 30%, or even put in money market instruments at maybe 10%. So, for a shareholder of these banks, this CRR debits are impairing the banks’ ability to increase their earnings because now are not able to use the funds that are legitimately theirs to create money for their shareholders. And the question is that under what framework is the Central Bank choosing to take people’s money?”