Federal Government efforts at stimulating local production, increasing new job creation and boosting exports are yet to crystalise across the non-oil sector as local companies continue to import more than they are exporting.

The data released by the National Bureau of Statistics (NBS) showed non-oil imports by sea exceeded exports by more than 463 percent in the first quarter of the year.

Also, the country’s total trade by the sea dipped by N411.4 billion in the first quarter when compared with the number obtained in the fourth quarter of 2018. 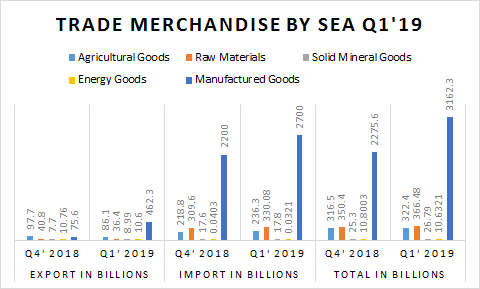 The total value of non-oil export for the first quarter stood at N604.4 billion, 162 percent higher than the N371.9 billion recorded in the fourth quarter of 2018.

While the total worth of non-oil imports for the first quarter stood at N3.4 trillion. Therefore, the non-oil import was higher than export by N2.8 trillion.

Speaking on the report, Dr Victor Iyama, the President, Federation of Agricultural Commodities Association, said the increase in participation of the non-oil export sector boosted the numbers as shown above.

He said, “Apart from the fact that most of the main crops such as cocoa, cashew, ginger, hibiscus and scent leaves are in season from November to March, more people are going into the non-oil export sector and there has been greater transparency and channels of official export declaration and documentation.

“Also, production of many of the vegetables have gone up and with Irrigation, some of them can be grown three times a year.”

Overall, more products are being imported than those being exported, suggesting that pressures remain on the foreign reserves and further highlights why the central bank continues to restrict importers of more items from accessing forex at the official window.