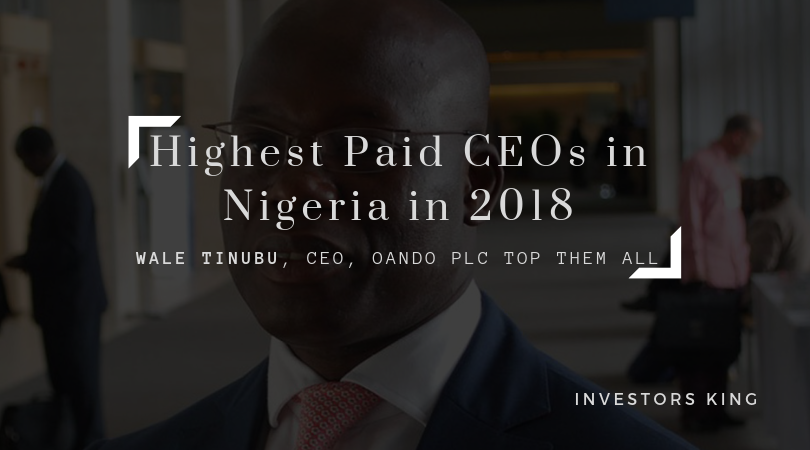 Annual package of Chief Executive Officers (CEOs) is directly proportional to their companies’ performance. In 2018, the top twelve CEOs in Nigeria earned a total of ₦3.638 billion amid strong positive performance. However, the oil sector paid the most during the year, largely due to the positive global oil outlook that saw crude oil reaching as high as $86 a barrel in the second half of 2018.

Below is a comprehensive breakdown of highest-paid CEOs in Nigeria in 2018.

Tinubu top the list of 2018 highest paid CEOs of quoted firms in Nigeria despite the headwinds. A 67 percent increase from his 2017 package.

The company declared a profit after tax of ₦28.8 billion for the 2018 financial year and paid 1.73 percent as CEO’s salary. 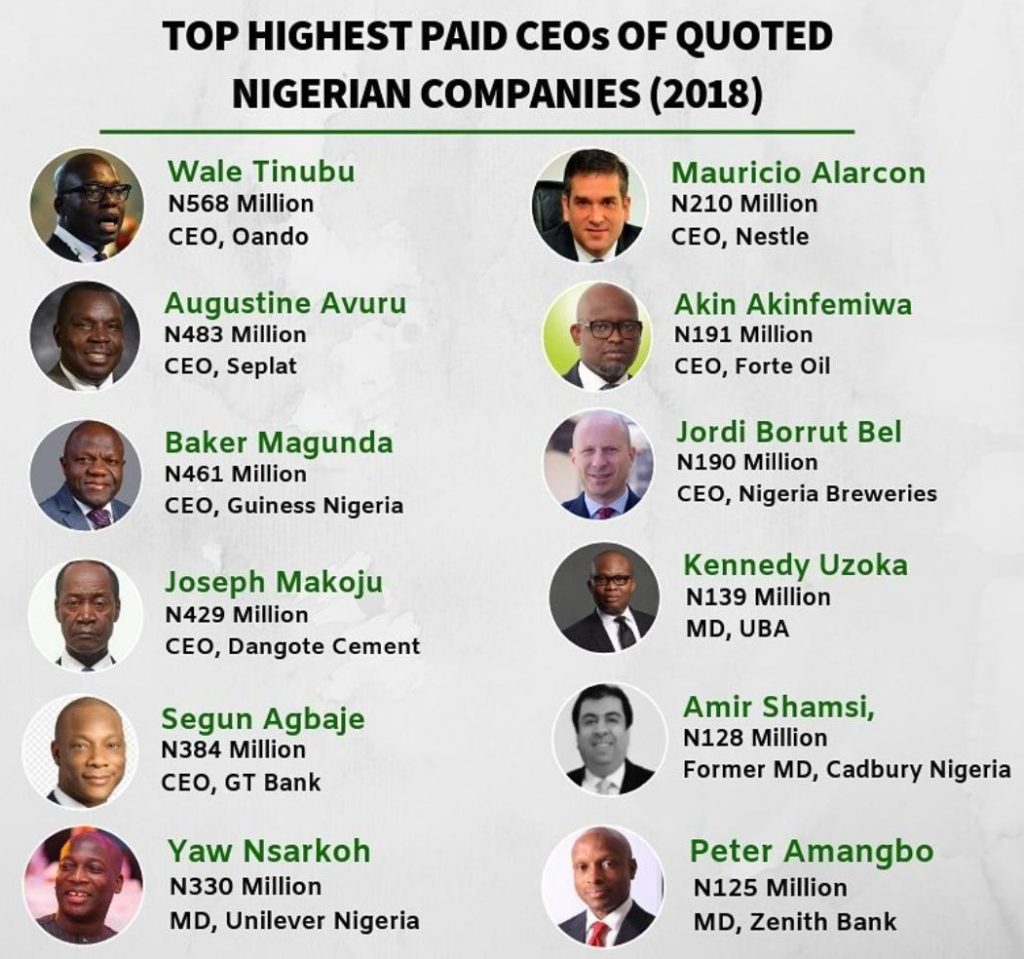 Augustine Avuru of Seplat Plc, another oil company, trailed Wale Tinubu closely with ₦483 million in annual salary in 2018. A slight increase from the ₦476 million he received in 2017.

In the third place is Baker Magunda, the CEO of Guinness Nigeria Plc, who earned an annual salary of ₦461 million in 2018, up from ₦186 million paid to the previous CEO in 2017. Magunda joined Guinness Nigeria from Diageo in May 2018.

The Chief Executive Director of Dangote Cement Plc earned a ₦429 million in 2018, one of the few justified earnings.

Dangote Cement Plc declared profit after tax of ₦390,325 billion in 2018 financial, a 91.1 percent increase from a year ago.

Segun Agbaje, the CEO of GTBank, top the chart in the banking sector just like the bank he manages.

The respected CEO, who is at loggerhead with Innoson Motor, took ₦384 million home in 2018, an increase of 43 percent when compared to his ₦224 million paid in 2017.

Mr. Nsarkoh, who is the Managing Director of Unilever Nigeria Plc, took home a total package of ₦330million in 2018, representing a 50.6 percent increase from his 2017 earnings.

Nestle paid Mauricio Alarcon ₦210 million in 2018. The Manchester University graduate has been working in the company since 199.

The CEO of Forte Oil, AKin Akinfemiwa, earned ₦191 million in 2018. The company owned by Femi Otedola declared profit after tax of ₦7.9 billion for the first half of 2018.

Nigerian Breweries Plc paid Borrut around ₦190milllion in annual salary in 2018. A substantial drop from ₦340 million earned in 2017.

The United Bank for Africa Plc paid Uzoka, Managing Director of the bank, ₦139 million per annum in 2018. A reasonable package considering his achievements.

The lender reported a profit after tax of ₦78.6 billion in 2018, up from ₦77.5 billion recorded in 2017. In the first quarter of 2019, the bank commenced full operation in the United Kingdom to better deepen trade between Africa and the rest of the world.

Amir Shamsi, who was the former Managing Director of Cadbury Nigeria Plc, earned ₦128million per annum in 2018.

Mrs Oyeyimika Adeboye took over as the new Managing Director from Amir Shamsi.

Zenith Bank paid Peter Amangbo, the former Managing Director/CEO of the bank, a total annual package of ₦125 million in 2018.

The tier I bank announced profit after tax of ₦193 billion for the financial year 2018.