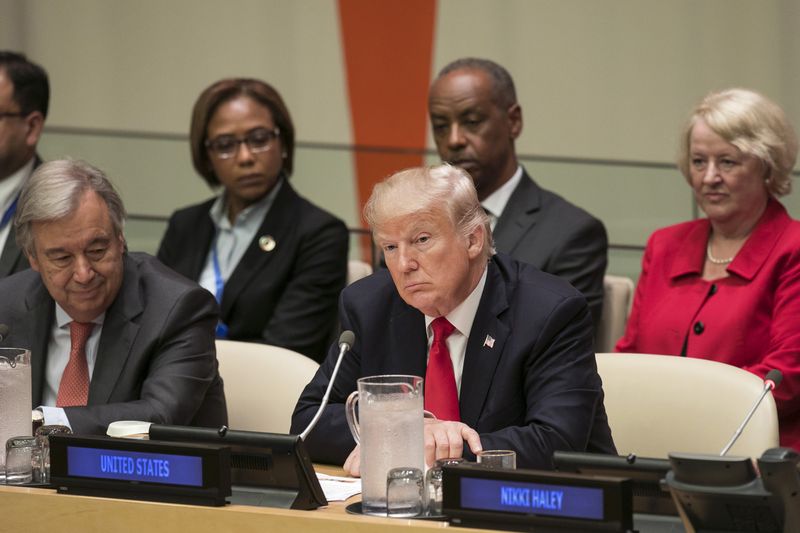 US President Donald Trump said Monday that Congress “can’t impeach” him over the findings of the Mueller report into Russian election meddling and his alleged attempts to hamper the investigation.

Defiantly insisting that he did nothing wrong, Trump also denied a semblance of dysfunction in the White House where disobedient aides are said to have saved him from committing obstruction of justice by refusing to carry out his instructions.

Asked by reporters at a White House Easter event for children whether the prospect of impeachment worries him, Trump replied: “Not even a little bit.”

“Only high crimes and misdemeanors can lead to impeachment. There were no crimes by me (No Collusion, No Obstruction), so you can’t impeach,” Trump stated earlier on Twitter.

However, Democrats believe the Mueller report has revealed serious wrongdoing by the president and have yet to decide on impeachment.

The report confirmed that Russian operatives had attempted to interfere in the 2016 election to help Trump beat Democratic candidate Hillary Clinton, including by hacking into email accounts.

The probe also found that Trump’s campaign took advantage of the impact on Clinton, but did not deliberately reach out to collude with the Russians.

During the investigation, Trump repeatedly tried to hamper Mueller’s work, the report said.

But Mueller did not rule one way or the other on whether Trump had committed the crime of obstruction of justice, effectively leaving the matter to Congress.

Democrats, who control the lower house, are so far mostly holding off from calling for impeachment proceedings, which would be immensely divisive ahead of 2020 presidential elections.

However, Democratic 2020 hopeful Kamala Harris said during a presidential town hall broadcast on CNN Monday night that she believes “Congress should take the steps towards impeachment.”

That made her the second candidate to do so after Senator Elizabeth Warren called for impeachment proceedings last week.

But her Democratic rival Bernie Sanders said at the same event that while he supports a “thorough investigation,” he is concerned it may become a distraction in the bid to oust Trump in the 2020 election.

“If for the next year, year and a half, going right into the heart of the election, all that the Congress is talking about is impeaching Trump… and we’re not talking about… all of the issues that concern ordinary Americans, what I worry about is that works to Trump’s advantage,” Sanders said.

Powerful House committees still plan to dig further into the scandal and are pushing to be given the whole Mueller report, including parts currently blacked out for security or legal reasons.

“While our views range from proceeding to investigate the findings of the Mueller report or proceeding directly to impeachment, we all firmly agree that we should proceed down a path of finding the truth,” House Speaker Nancy Pelosi said in a statement.

House Judiciary Committee Chairman Jerry Nadler issued a subpoena on Monday for former White House counsel Don McGahn to testify. McGahn was a key witness in the Mueller probe and will likely be asked about Trump’s alleged obstruction of justice.

Trump is spinning the Mueller report as a complete exoneration. He has gone as far as saying repeatedly that the probe was a political hit job amounting to “treason” and “spying.”

Democrats, however, say the report has demonstrated in detail that Trump is unfit for office, even if the evidence would be insufficient to prove crimes in court.

Whatever the truth, Mueller’s report has inflicted damage on the former real estate tycoon and reality TV showman’s reputation through stories of close aides maneuvering to stop the president from going too far in his attempts to slow down the probe.

“The President’s efforts to influence the investigation were mostly unsuccessful, but that is largely because the persons who surrounded the President declined to carry out orders or accede to his requests,” Mueller wrote in his report.

This narrative clearly annoys Trump, who has built a career on his image as a ruthless boss, famous during his television performances on “The Apprentice” for telling contestants: “You’re fired!”

Even though the aides allegedly disobeyed him so that they could prevent more serious damage, Trump denied Monday that any sort of insubordination would be possible.

“Nobody disobeys my orders,” he said at the Easter event.

Trump also faces danger from congressional probes into his business interests and tax history, which — in a break with tradition — he has refused to make public.

On Monday, Trump and his businesses filed a Washington federal court lawsuit to try and block a subpoena issued by the House Oversight and Reform Committee to gain access to their financial records.