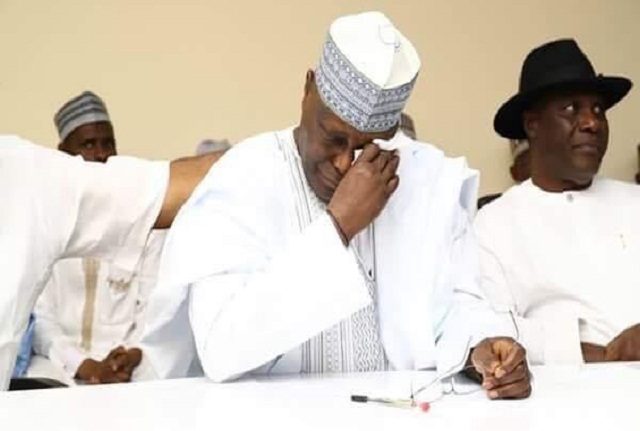 The Federal Government said on Friday it was in possession of fresh evidence allegedly linking the presidential candidate of the Peoples Democratic Party, Alhaji Atiku Abubakar, to the collapse of Bank PHB.

It stated that Abubakar had questions to answer in connection with an alleged N156m slush fund that he took from the bank through Claremont Management Services Account on 13th January, 2009.

The Minister of Information and Culture, Mr Lai Mohammed, made the allegation in Abuja while speaking with State House correspondents on whether the government was disturbed that the former VP got a United States visa and travelled to the US on Thursday.

Mohammed claimed the government was not bothered about the trip but added that he must clear his name of corruption allegations, especially his alleged role in the collapse of Bank PHB.

The minister said, “I have come to make few remarks about the recent visit of the presidential candidate of the PDP to the US. You can recall that a few weeks ago, I did issue a statement advising the US Government not to issue a visa to Atiku.

“Remember also that in that same press conference, I also stated that it remained the prerogative of the US government to issue visa to anyone it deemed fit.

“Let me say right away that we are not perturbed one bit that Alhaji Atiku Abukakar was able to secure a visa to the US. As a matter of fact, he can go ahead and get the US Green Card; that will not save him from imminent defeat in the forthcoming election.

He added, “I want to remind Abubakar that the elections will be right here in Nigeria and not in the US. In any event, any time Abubakar returns home, he has questions to answer following the fresh evidence that we have that he benefited from slush funds that led to the collapse of former Bank PHB.

“The document we have shows he benefited to the tune of N156m from that slush fund.

“The paper which we have here started from an internal memo on January 13, 2009, which reads, ‘Please refer for discussion, your requested overdraft in favour of Atiku Abubakar for N156m and deliver same to me.

“Please note that it must be delivered today (January 13) on the same date.’’’

The minister stated that there was a second memo, which confirmed the receipt of the money requested.

He quoted from the second memo, which reads, “Please confirm that the amount stated below be issued from Claremont Management Services account.”

He said, “And we have evidence here of the account mandate, the name of Atiku Abubakar; we also have a copy of the cheque in which the sum of N156m was issued to Atiku Abubakar, dated January 13, 2009.

“And of course, we also have a statement of account within that period that confirms that this sum was actually paid into his account.

“These are fresh evidence as to his involvement in the collapse of Bank PHB. So, we want him to stay as long as he wants in the US, but as soon as he comes back, he has to explain to the electorate and to Nigerians what his role was in the collapse of the former Bank PHB.”

Mohammed, however, observed that the visa the US gave to Abubakar was an indirect endorsement of Abubakar for the February 16 polls by the US government.

Allegation of corruption by FG is cock and bull story -Atiku

In his reaction, Atiku mocked the Federal Government for failing to stop the United States government from granting him visa, saying with or without a trip to the US, the PDP would dislodge the President Muhammadu Buhari-led All Progressives Congress at next month’s election.

The former vice-president also dismissed as cock and bull story, the allegation by Lai Mohammed that he had a case to answer over the collapse of Bank PHB (Platinum Habib Bank).

In a statement issued in Abuja on Friday, Atiku’s Special Assistant on Public Communication, Mr Phrank Shaibu, said the Federal Government should bury its head in shame having failed to stop him from travelling to the US.

He said it was shameful that the governing APC took it upon itself to call on the authorities of another country not to grant a private citizen entry visa, which ordinarily should not be its business.

Atiku who arrived in the US on Thursday said the APC was jittery knowing that its government had failed.

He stressed that Buhari’s days as President of Nigeria were numbered, adding that members of the ruling party had been running from pillar to post.

Atiku challenged the Federal Government to either prove his alleged corrupt activities or forever remain quiet.

He said, “It is disgusting to continue to spin allegations of corruption against me by people who have failed to come forward with a single shred of evidence of my misconduct while in office.

“Isn’t it a shame that the ruling party, which National Chairman, Adams Oshiomhole, only on Thursday gave official confirmation to the general belief that even if Lawrence Anini becomes an APC member today, Buhari will forgive and consecrate him, can turn around to accuse me of corruption today?

“They just suddenly woke up to the reality that their lies about Atiku being corrupt can no longer hold?”

he had added, “I challenge the Federal Government to come up with evidence that I benefitted from N156m slush funds through Claremont Management Services Account on 13th January, 2009 as well as the collapse of Bank PHB as they have alleged.

“It is instructive to note that the same Bank PHB is now Keystone Bank, which was said to have been acquired by Buhari’s cronies through AMCON last year.”

Opposition Parties Raise the Alarm over Plot to Arrest Onnoghen