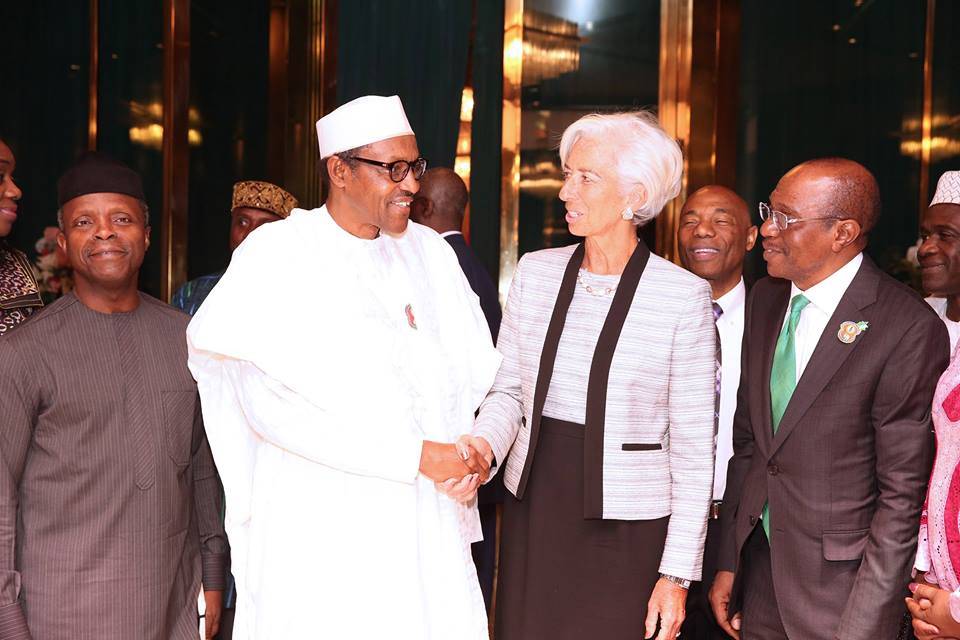 The International Monetary Fund said on Wednesday that global debt had reached an all-time high of $184tn in nominal terms, the equivalent of 225 per cent of Gross Domestic Product in 2017, warning of “a legacy of excessive debt”.

The IMF, which released the new data on global debt on its website, put total debt in Nigeria at 34 per cent of the nominal GDP of $376bn as of December 2017, with private debt accounting for 36.6 per cent of the debt.

With Nigeria listed among the low-income developing countries, it said public debt continued to grow in 2017 and, in some cases, reached levels close to those seen when countries sought debt relief.

The Washington-based fund said, “With financial conditions tightening in many countries, which includes rising interest rates, prospects for bringing debt down remain uncertain. The high levels of corporate and government debt built up over years of easy global financial conditions constitute a potential fault line.

“So, as we close the first decade after the global financial crisis, the legacy of excessive debt still looms large.”

According to the data, on average, the world’s debt now exceeds $86,000 in per capita terms, which is more than two and a half times the average income per-capita.

The Washington-based fund said, “The most indebted economies in the world are also the richer ones. The top three borrowers in the world — the United States, China, and Japan — account for more than half of global debt, exceeding their share of global output.

“The private sector’s debt has tripled since 1950. This makes it the driving force behind global debt. Another change since the global financial crisis has been the rise in private debt in emerging markets, led by China, overtaking advanced economies. At the other end of the spectrum, private debt has remained very low in low-income developing countries.”

The IMF said global public debt, on the other hand, had experienced a reversal of sorts.

It added, “After a steady decline up to the mid-1970s, public debt has gone up since, with advanced economies at the helm and, of late, followed by emerging and low-income developing countries.

“For 2017, the signals are mixed. Compared to the previous peak in 2009, the world is now more than 11 percentage points of GDP deeper in debt. Nonetheless, in 2017 the global debt ratio fell by close to 1½ per cent of GDP compared to a year earlier.”

It said the last time the world witnessed a similar decline was in 2010, although it proved short-lived.

“However, it is not yet clear whether this is a hiatus in an otherwise uninterrupted ascending trend or if countries have begun a longer process to shed more debt. New country data available later in 2019 will tell us more about the global debt picture,” the IMF said.

According to it, there has been a retrenchment in debt build-up among advanced economies, while emerging market economies continued to borrow in 2017, although at a much slower rate.

“Overall, the picture of global debt has changed as the world has changed. The data show that a big part of the decline in the global debt ratio is the result of the waning importance of heavily-indebted advanced economies in the world economy,” the fund added.

There have been calls for more investments in the African Continental Free Trade Area (AfCFTA) agreement to boost the African economy.

At a recent virtual conference organised by the African Public Relations Association (APRA), an expert on trade and finance, Mr. Jesuseun Fatoyinbo, Head of Trade, Transactional Products and Services at Stanbic IBTC Holdings PLC, highlighted the benefits of increasing investments in the AfCFTA agreement during one of the sessions held as part of the three-day virtual conference.

Jesuseun stated that the AfCFTA agreement will allow African-owned enterprises to enter new markets, expand their customer base and create new commodities and services in the continent. The agreement was created in 2018, and a total of 54 African countries have signed up. Of these, 30 countries have ratified the agreement and 28 countries have deposited their instruments of ratification.

AfCFTA holds great promise for the African economy as it seeks to eliminate tariffs on intra-African trade, making it easier for businesses to trade within Africa and benefit from its emerging markets.

Speaking on the impact of trade on economic development, Jesuseun said: “The status of intra-regional trade within the European, North American and Asian economic corridors is currently estimated at 64 percent, 50 percent and 60 percent respectively.

“However, the status of intra-African trade currently stands at 17 percent, which is significantly lower than other continental regions. This limits business investments within the African continent while increasing trade dependence on foreign markets.” He emphasised the need for improvement in order to expand the African economy.

According to him, increased investments between African countries will trigger trade growth in Africa which will, in turn, promote industrialisation, economic development and subsequently lead to increased employment opportunities across the continent.

Jesuseun advised stakeholders on the need to observe other continental trade trends, as continental trade usually yields positive results. He said, “All sectors need to be involved in AfCFTA to promote industrial development and sustainable socio-economic growth in order to deepen the economic integration of Africa.”

The Stanbic IBTC Head of Trade cited some nations in East Africa which were insulated from economic recession as a result of intra-trade activities. He noted that “despite the severe issues caused by the COVID -19 pandemic in 2020, Tanzania and Ethiopia avoided economic recession, due to their ever-improving trade policies.”

Jesuseun advocated the replication of their strategies across other African nations, to boost Africa’s income and lift millions of Africans out of poverty. Speaking on Stanbic IBTC’s capabilities to boost trade, he said, “Stanbic IBTC is leveraging world-class digital technologies to make commercial imports and exports easier. The organisation is committed to making trade processes seamless and easier with technology.”

Jesuseun concluded that trade processes need to be digitized, to enable seamless multilateral trade between African countries. He urged other stakeholders to create awareness about the usefulness of the AfCFTA agreement.