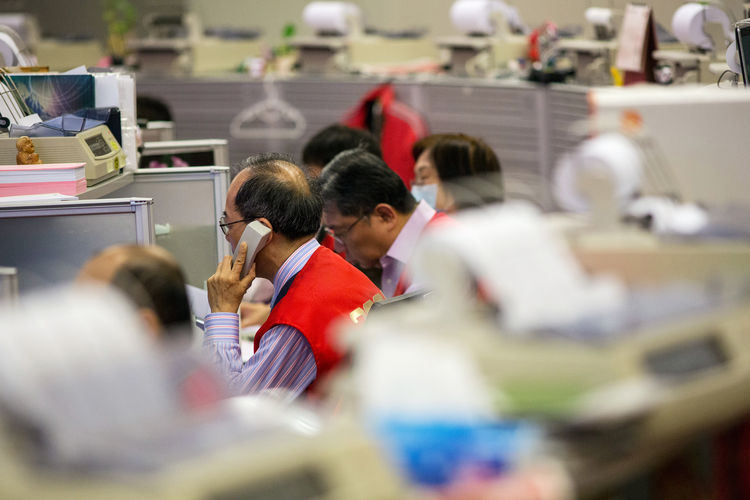 The torrid sell-off that swept through global stock markets this week eased on Friday after a bruising string of losses for investors triggered by worries over rising interest rates.

Major indices bounced off their lows in Europe and across Asia and futures trading pointed to gains on Wall Street. US stocks had suffered another heavy fall on Thursday, extending their losing streak to five sessions — a run blamed by Donald Trump on an “out of control” US Federal Reserve.

As the jitters eased, Frankfurt’s Xetra Dax 30 regained 1.2 per cent in opening trade, while the FTSE 100 recovered 0.3 per cent in London. The Europe-wide Stoxx 600 was up 0.8 per cent. Some of the sectors hit hardest by the selling rebounded most strongly, with the index tracking technology stocks up 1.4 per cent.

“The verdict is still out about current valuations and while some investors are viewing this as a buying opportunity, many others are maintaining a more cautious stance,” said Rebecca O’Keeffe, head of investment at Interactive Investor.

“Trade wars, rising interest rates and slowing growth have been front and centre in terms of big macro reasons for the rout, but the reality is that investors need to be asking whether valuations can be justified by company profits.”

The mood improved throughout the Asian trading day. Tokyo’s Topix held steady overall, turning around from intraday declines after a 3.5 per cent drop in the previous session. Hong Kong’s Hang Seng was up 1.8 per cent while Taiwan’s TWSE, one of the markets hit hardest this week, rallied more than 3 per cent.

Thursday’s losses took the S&P 500 index down 2.1 per cent, leaving the US benchmark 5 per cent lower over the week. The global FTSE All-World index retreated for a sixth day running, erasing all of 2018’s gains in one of the worst weeks of the year. It was up 0.5 per cent on Friday as European markets opened.

“It’s like a Jenga tower. The market has been a tower of blocks, it’s been strong over [the] past 12-18 months but then a few of the bottom blocks have been knocked out. That doesn’t mean it’s going to collapse, it just means there’s more risk in the market than there had been.”

The sharp equity sell-off followed after a bout of turbulence in the US Treasury market driven by strong economic data and a more hawkish Federal Reserve. The yield on the 10-year benchmark, which moves inversely to price, hit a seven-year high of 3.26 per cent earlier this week.

Mr Trump stepped up his criticism over tightening Fed monetary policy in an Oval Office meeting where he said he was “disappointed” in Jay Powell, the central bank chairman, but said he was not thinking of removing him.

“We have interest rates going up at a clip that’s much faster than certainly a lot of people, including myself, would have anticipated. I think the Fed is out of control,” he said.

Mr Trump added: “I’d like our Fed not to be so aggressive because I think they’re making a big mistake,” he said. That followed similar comments on Wednesday, when he said “the Fed has gone crazy”.