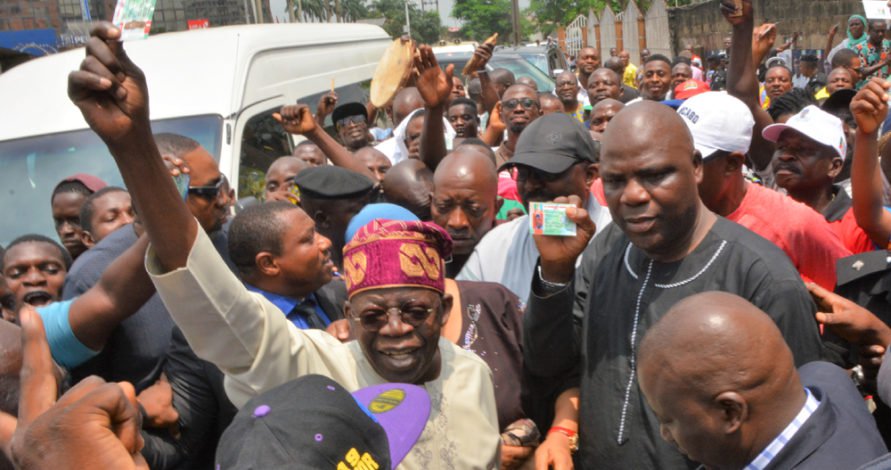 He said while a governor is expected to perform in office and fight the infrastructure battle, he is not expected to turn his back on the platform that brought him power.

Tinubu described the party as the major backbone of the governor and the architect of his victory at the poll, stressing that he should have carried the members along in his activities.

Hailing the adoption of the direct primary, the former Lagos State governor said the method was superior to the delegate system.

Tinubu applauded the huge crowd of members that came to vote, describing it as democracy in action.

He said he surrendered to the generality of party members who demanded the direct primary and rejected the governor’s second term bid.

The former governor said while the delegate system could be hijacked by rich aspirants, the direct system is insulated from corruption because it is open and promotes inclusiveness.

Tinubu said: “Seeing is believing. You have seen the people. You have seen participatory democracy. You have seen transparency. As a leader, I had to surrender to these people. It is their wish to participate in the exercise and determine who will be the next governor to direct the affairs of Lagos. And that has been demonstrated openly by the people. They have democracy and the anti-corruption policy of this government.

“Where you have delegate system, they move 24 hours around their constituencies. They collect from A, they collect from B, they collect from C, depending on the number of candidates. They give scores to the highest bidder. Stop promoting corruption and opposition to open primary. Allow them to openly demonstrate on the line where they belong with their identification cards. You kill corruption in the party.

“I wouldn’t have been the governor in 1999, if open primary had not been adopted. Throughout the state, I went to the nooks and crannies of the state; to 245 wards to canvass for support. It was not the delegate system.”

Tinubu said the circumstances that warranted his support for Ambode in 2014 does not exist in 2018.

He recalled that the party accepted Ambode’s ambition in 2014 when he brought him from the civil service, adding that the same party has now rejected his second term bid.

Tinubu said: “Who did I support in 2014? Life is dynamic. If a party which made me the leader of the structure in Lagos; it is only when you have followership that you’re a leader in democracy. If I look back and I don’t find them again, if I don’t respond to them, if I fail to accede to their request, I would have failed the leadership test. This is not personal. It is beyond me as a person. In the preface of every democratic constitution, you see: ‘we the people.’ It is preceded by ‘we the people’. I had to submit myself to the wishes and yearnings of our party.”

The former governor said Lagos APC was warming up for next year’s elections, stressing that the primary was the beginning.

Urging others to learn from the developments in the Lagos APC, Tinubu said: “This is an elixir to the general election. Ambode Akin is doing well, yes. He has to be a good party man. Not only the glamour, not only about brick and mortar. The chance is determined by character. For you to become an influential person, you have to respond to the yearnings of those people. This is politics. This is one man, one vote. They are for you today. If they change tomorrow, you have to abide by it.”

Tinubu also cautioned against any plot to destroy the party, ahead of the general elections.

Tinubu added: “Look at that in the larger picture. If this house that accommodates all of us; we are facing one way. We are supporting the president. If they are changing, I have to abide by that. I have no choice. If you are a good party man; look at how long we have been here for how many years of democracy. Twenty five to 30 years of nurturing democracy. You must have one good reason for the people to continue to believe and respect you.”

There was anxiety at the party’s office on Acme Road, Ogba, Ikeja, following the rejection of the primary by the Clement Ebri-led Primary Committee.

Ebri said the panel will not affirm the primary results because the ballot papers and boxes it provided were not used.

Frowning at the rejection, Tinubu, who visited the committee members at the Protea Hotel, Ikeja, described it as an afterthought and in bad faith.

A party source said: “This may give room for insinuation that the panel may have an agenda. People may start alleging that the panel was compromised along the way. We are going to resist any annulment. The committee has not shown any sign of intention to work harmoniously with the Lagos State APC Executive Committee to ensure a successful primary. The committee asked for an office within the party secretariat to operate. The office was provided.

“But, since they left for their hotel suites in Protea, they have shunned the office provided for them at the party secretariat. The committee said that the primary began without the distribution of ballot papers and result sheets. The party had earlier rejected the use of ballot papers and ballot boxes. The party preferred queuing on the line behind the posters of the two aspirants.”

She said: “Our party is supreme. This is the wish oif the party. Our people have spoke at the primary.”