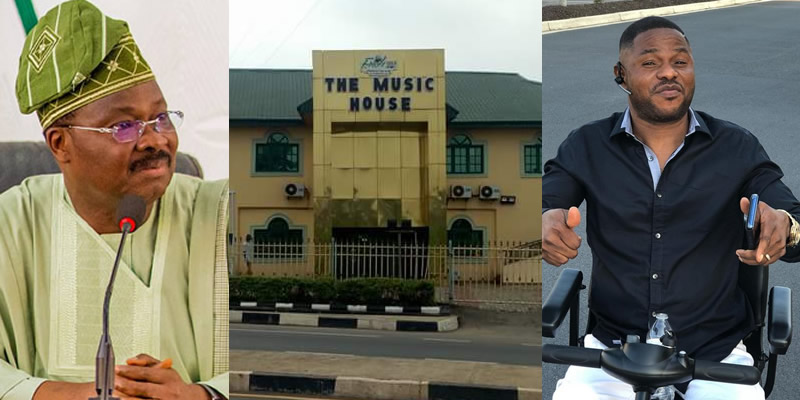 There was outrage yesterday over the demolition of popular singer Yinka Ayefele’s building housing the radio station, Fresh FM, in Ibadan, the Oyo State capital.

The government, last Thursday, threatened to demolish the building for allegedly contravention of the state’s building codes.

Many of them carried placards.

They sang solidarity songs condemning the government for destroying the property.

The station’s Director of Corporate Affairs and Promotions, Mr David Ajiboye, said a N28 million transmission equipment, which was reportedly delivered to the radio station last week and yet to be inaugurated, was among property destroyed.

The singer’s fans caused a traffic snarl around Challenge en route the Toll Gate as well as the Lagos-Ibadan Expressway .

Part of the building, called Music House, was demolished around 4.30 am by a team, including soldiers in tow.

The operation was said to have lasted about an hour.

The affected parts include the fence, the spiral staircase, front of the building and the topmost part, which serves as waiting area to Ayefele’s office.

The station stopped transmission for about two hours, urging the crowd not to take laws into its hands.

Ayefele urged his supporters not to damage the mass transit bus parked in front of the Music House.

They described the demolition as callous.

The government, on August 13, issued a three-day notice of demolition to the owners of Music House.

Before the ultimatum lapsed last Wednesday, Ayefele had filed a suit against the government before the State High Court, sitting in Ibadan and presided over by Justice Iyabo Yerima.

The court adjourned the matter till today (Monday) for hearing and ruling on the ex parte application filed by Ayefele’s lawyer Bolanle Olayinka.

Last week, the Commissioner for Information, Culture and Tourism, Mr. Toye Arulogun, said the decision to demolish the structure was based on contravention of planning laws.

He added that many other structures that contravened the planning laws were also served with notices of demolition.

Special Adviser to the Governor on Communication and Strategy Mr Bolaji Tunji said the matter had been on between the government and owners of Music House.

The Oyo State chapter of the Nigeria Union of Journalists (NUJ) said it was disturbed by the demolition.

In a statement by its Chairman and Secretary, Adewumi Faniran and Bola Ogunlayi, the union said it was “particularly worried that the exercise had to be carried out when the matter is before a court of competent jurisdiction”.

The statement said: “As the Fourth Estate of the Realm and believers in the rule of law, Oyo State NUJ expected that the court would have been left to take a definite decision on the demolition before it was carried out.

“The Oyo State Council, therefore, calls on the government to ensure that no matter what, it comes to the aid of Fresh FM, which has been a pride of Ibadan in particular and Oyo State as a whole, by relocating them to another site and ensure smooth take-off of their operations once again.”

The owner of One Love Family, Satguru Maharaji, yesterday urged residents not to demonise Governor Abiola Ajimobi and his party, the All Progressives Congress (APC), on the demolition.

Maharaji, a prince of Ibadan who described Ajimobi as a good man, said he had known the governor for many years as a godly man with human feelings and compassion.

Addressing reporters at his Ibadan Ashram to mark 25 years of declaration on Nigeria as a war-free country, Maharaji urged the parties to explore legal options to resolve the matter.

He said: “I was at Yinka Ayefele’s Music House this morning (yesterday) and I learnt that the governor gave demolition order after several correspondences between the government and Ayefele. The governor, to me, is a good man who has demonstrated that he is a father to all.

On his Facebook page after the demolition, Ayefele said: “Oyo State government did at last… My pains, my sweat… So help me God.”

Others on the scene include the Secretary of Unity Forum, a splinter group in the state chapter of the APC, Dr Wasiu Olatunbosun, and the lawmaker representing Ibadan North in the House of Assembly Olusegun Olaleye.

The NUJ has expressed anger at the demolition of Music House in Ibadan.

In a statement last night by its National President Waheed Odusile, the union said: “We are particularly alarmed by the reckless action of the Government of Oyo State, which demolished the premises of Fresh FM in Ibadan. “For whatever reason, the destruction of the media house by agents of Governor Abiola Ajimobi was insensitive and punitive and an attempt to stifle the media.”