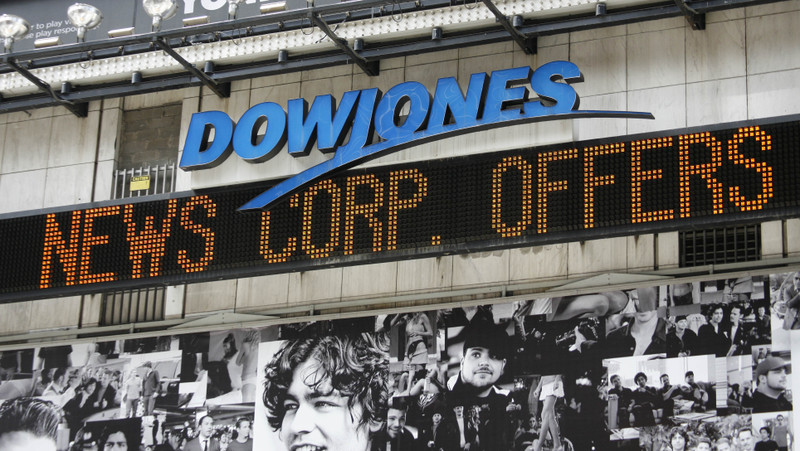 The Dow Jones Industrial Average passed another milestone, topping 23,000 for the first time, as strong earnings from UnitedHealth Group Inc. and Johnson & Johnson helped push the more than century-old gauge to a record.

Even as political risks persist from Spain to North Korea and Washington, the latest thousand-point climb took only 76 days. The rally came amid a synchronized advance in the global economy with only tepid inflation that has enabled central banks to leave stimulus in place. At the same time, investors are speculating Republicans will deliver tax cuts and corporate profits look set to expand again.

Round-number milestones are routinely dismissed by the professional investor class as noise. But it’s a sign the bull market just keeps chugging along and investors don’t want to miss out, said Howard Silverblatt, senior index analyst at S&P Global.

“If I’m on the side, does that push me to get in?” he said. “Psychologically do I look at that and say ‘I’m missing out on this market, I’m sitting on the sidelines.”’

“Yes, each 1,000 gets less of a percentage, but the bottom line is look how quick we’re doing it,” he said.

Johnson & Johnson jumped after raising its forecast, while UnitedHealth rallied after medical spending fell last quarter. IBM Corp. is slated to report after markets close. The stock-market rally boosted Goldman Sachs Group Inc.’s third-quarter profit, with gains from equities investments rising 51 percent in the three months. Almost a third of the companies in the 30-stock gauge report earnings this week.

Financial and industrial stocks have led the Dow in its latest 1,000-point trip, with Goldman Sachs and Boeing Co. contributing to over a quarter of the index’s growth. Boeing retreated Tuesday after rival Airbus SE bought a majority stake in Bombardier Inc.

The Trump administration’s promise of big tax cuts and deregulation has provided a boon to financial institutions. President Trump and Senate Majority Leader Mitch McConnell have said they aim to deliver a tax bill by December.

Dennis DeBusschere, head of portfolio strategy at Evercore ISI, said there’s potential for more upside if the bill gets through.

“Really the odds of the tax reform process are most critical for everything in the fourth quarter,” he said.