As lead engineer for Apple Inc.’s smart-home technology, Andrew Burks spent a lot of time with entrepreneurs working on thermostats, lights and other products that can be controlled via smartphone. One day he visited Otto, a San Francisco startup building a digital door lock. Burks was blown away by what he saw and before long had joined the Otto team, which at one point was mostly comprised of Apple alums.

“I love Apple, and it was really hard decision for me to leave,” Burks says. “This was an opportunity I didn’t want to miss.” 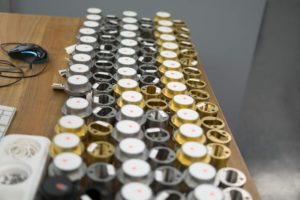 Otto (not to be confused with the autonomous vehicle company bought by Uber) is one of several startups seeking to gain an edge over such entrenched players as Schlage and Honeywell, which now sell digital versions of their popular locks. While a luxury for most people, digital locks are expected to become increasingly popular as companies like Apple, Amazon, Google and Samsung pour resources into technology that will let people control their homes from afar. For several years now, smartphones have been the main interface, but voice-activated speakers like Amazon’s Echo and the Google Home are increasingly seen as a natural hub for the smart home.

The Otto team decided to re-invent the entire lock because they thought they could improve security and privacy as well as bring better design to a device that’s has changed remarkably little in hundreds of years.

Typically digital locks rely on a central hub to work—a bridge that connects appliances, lights and more to a phone or computer. They also usually include an old-fashioned key in case the technology fails. Some use location-based triangulation to know when someone is home in order to unlock the door.

The Otto has no key, works directly with a smartphone and uses Bluetooth to figure out when a resident needs to be let in. Echoing Apple’s relentless focus on security, the designers added encryption to keep intruders at bay. By the way, in the event homeowners forget their phone or are out of juice, they can turn the lock like a knob and input a four-digit code. (The lock doesn’t currently work with smart-home technology from Apple, Amazon, Samsung and other mainstream tech companies; that will come later.)

“Your phone is the key,” Burks says. “You walk up to the door, it knows that you’re there, you press the button on the outside, and you get in.”

Otto is looking to Nest for inspiration. Founded by former iPod division chief Tony Fadell and packed with Apple alumni, the thermostat-security camera maker was acquired by Alphabet Inc. in 2014 for $3 billion (though internal turmoil prompted Fadell’s exit last year).

The Otto lock’s main hurdle is price. Here, too, the company echoes Apple’s philosophy. Otto didn’t set out to build a $700 lock, says marketing chief Wendy Harrington. That’s simply what it costs to build a lock of this quality. Maybe so, but for about the same price you can put a mini-computer in your pocket that does so much more than unlock your front door. It’s called the iPhone.